The German company, which handles work platforms, industrial erection and crane rentals, is one of the first companies to invest in the trailing dolly solution. It recently transported three 75m-long wind turbine blades 400km from Rostock on Germany’s north coast to the Hopsten-Schale wind farm.

In order to transport the blades from the Baltic Sea to their destination in Westphalia, Hofmann relied entirely on special vehicles from Goldhofer. The route was mainly on motorways, allowing the company to accurately calculate the expected forces acting on the blades and vehicle components.

The three vehicle combinations, each over 82m long, completed the journey in three days. “The combination of a blade root carrier on the gooseneck and a five-axle trailing dolly with pneumatic suspension plus turntable and blade support is a new industry benchmark,” said Goldhofer.

With this system, several roundabouts and tight turns were negotiated without difficulty. As the turbine blade itself has a structural function within the configuration, the solution offers significantly higher ground clearance than extendable vehicles so that the blade simply passes over various obstacles.

The vehicles were first presented as a concept for the transportation of turbine blades in 2019 and were the subject of discussions with Hofmann following approval by the blade manufacturers. “We were immediately convinced by the advantages. The blade is carried unsupported between the free-turning device behind the tractor and the trailing dolly. This permits higher travel speeds of up to 80 kph and also greatly simplifies route planning,” said Sven Wolter, transport planner at the Hofmann company.

Goldhofer’s ‘BLADES’ is available in a number of different combinations. The use of a 5-axle tractor and/or dollies, for example, the system offers scope for a variety of applications. The trailing axle can be coupled directly to the free-turning device when running empty. This turns ‘BLADES’ into a standard tractor-trailer with variable-load lift axles to reduce tire wear.

The turbine blade is transported high enough to pass over a wide range of obstacles. 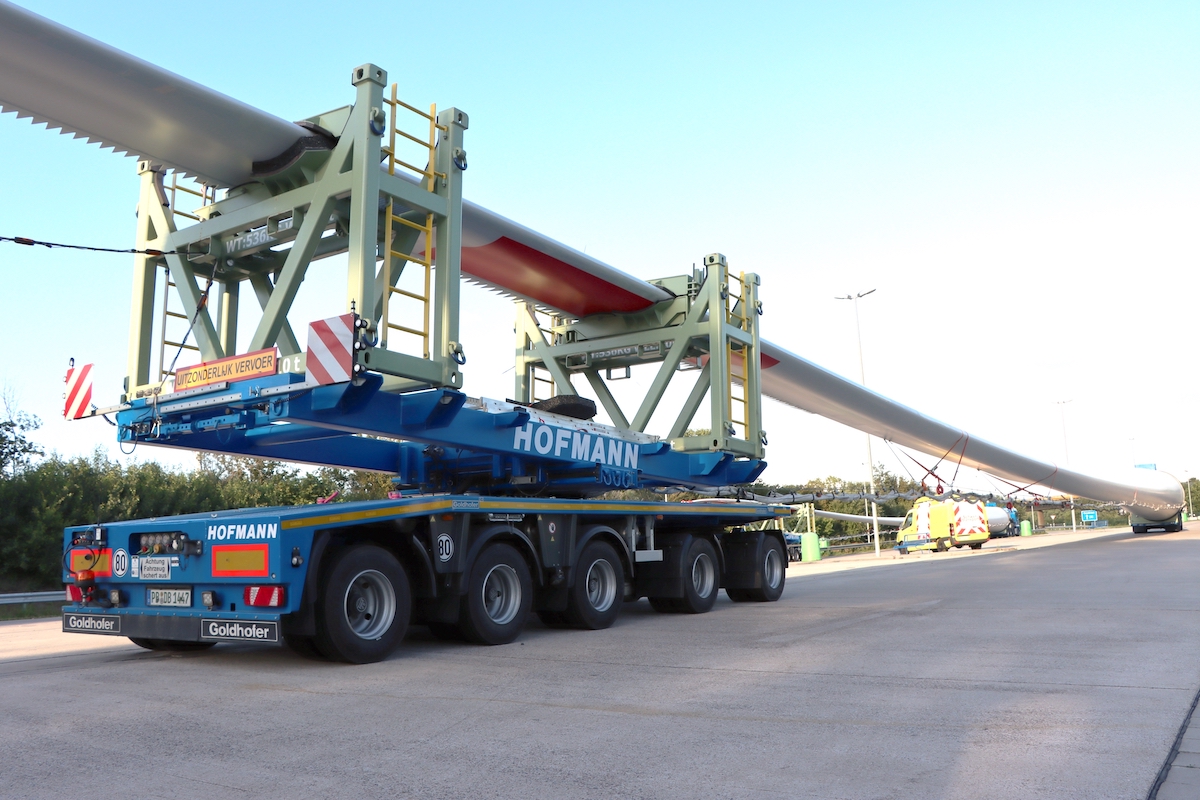 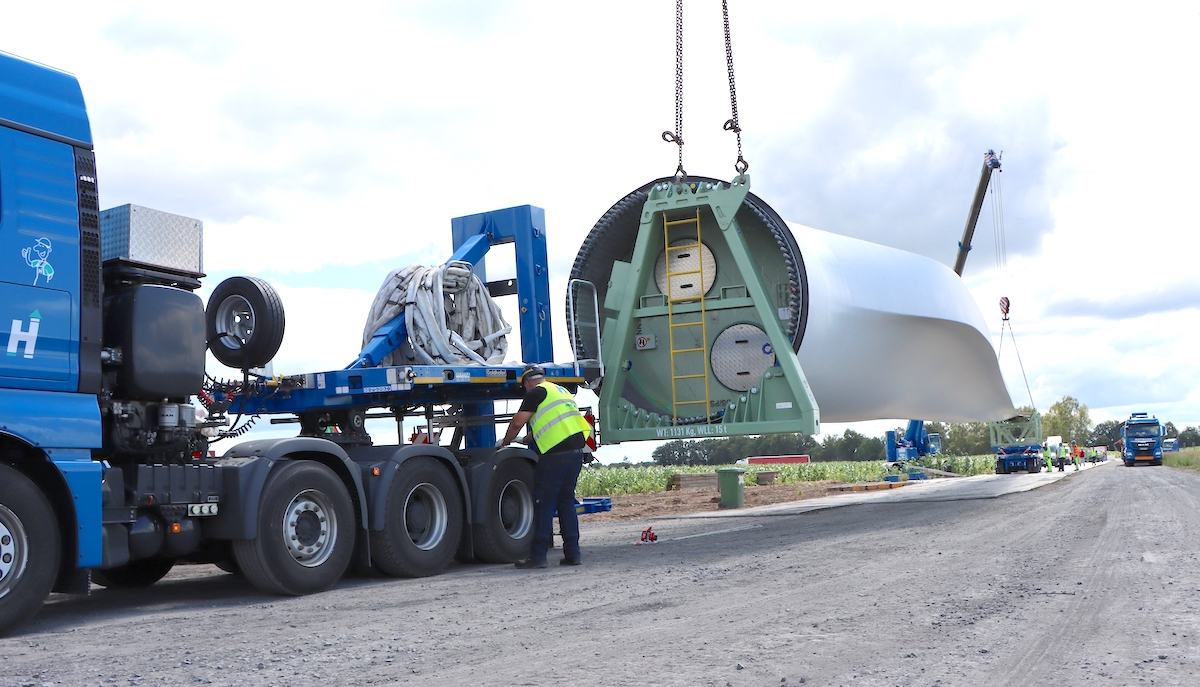 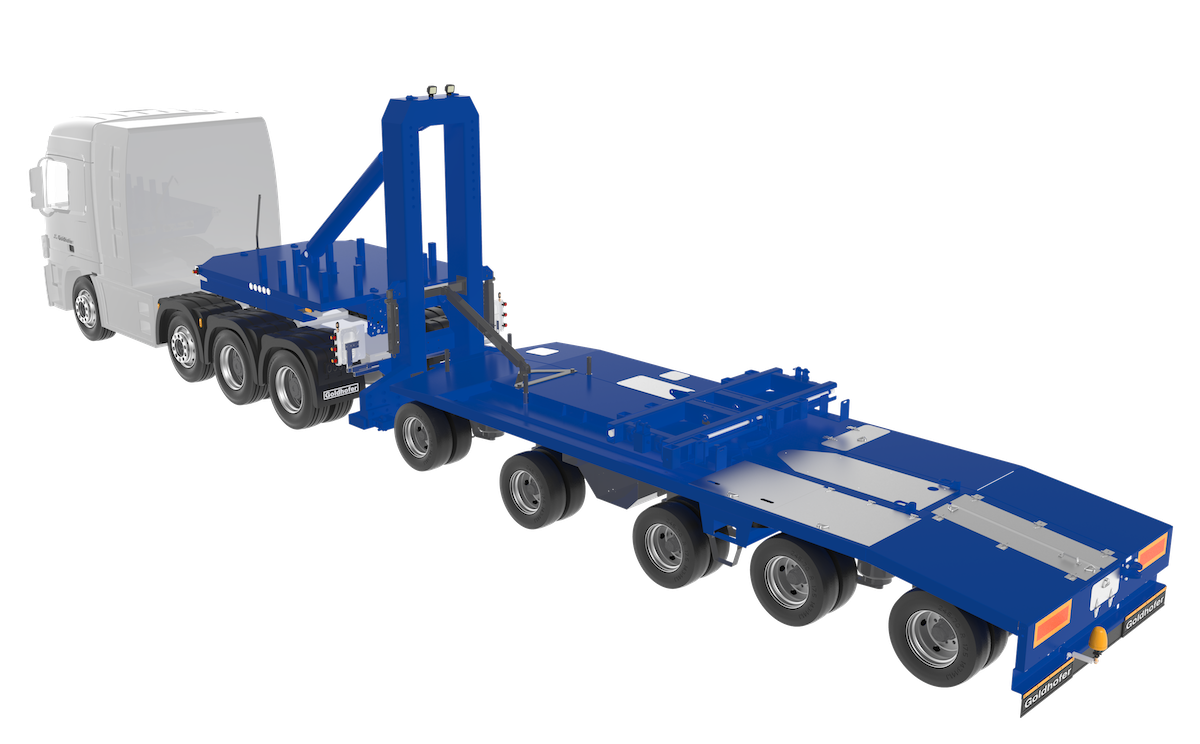