A Kobelco CKE3000G crawler crane from UK crane rental company SECH’s fleet has been working on its first major lifting and foundations contract in Portsmouth Harbour, having arrived at the site by barge in November.

The 300t CKE3000G, currently the largest of Kobelco’s CKE range working in Europe, is working for Knights Brown as part of an ambitious, £19m investment in cruise and ferry facilities, including leveling out and increasing the length of the cruise berth and building an additional dolphin.

The works will increase the length of ships the port can handle to 255m, meaning a wider range of cruise lines will be able to visit the city. This will help the port achieve its ambition of tripling the number of cruise passengers using Portsmouth in the coming years.

Ahead of starting work, the CKE3000G began its journey to Portsmouth from SECH’s yard in Hockley, Essex on eight low loaders, with the first four taking the base machine, two tracks and car-body weights to Southampton docks. These were assembled using a yard crane and then tracked onto a barge ready for the second of the four low loaders to arrive with the jib sections and counterweights. Once these arrived, the CKE3000G’s own rigging was used to place the crane’s counterweight and complete the assembly.

Once loaded, the barge was towed to Portsmouth, a journey of four hours. On arrival, the CKE3000G lifted a BSP CG300 hydraulic pile driving hammer, which has a drop weight of 20t, a 16t shroud and a maximum impact weight of 300t.

The CG300 is being used to drive 21 piles, of up to 33m in length and 1.2m in diameter, into the seabed, which, according to Joe Morley, project manager at Knights Brown, is unusual in its geology: “The seabed where the jetty and dolphin are being constructed features a 2m layer of silt sitting on a 2m layer of clay, which sits above a bed of sand. Normally you’d expect to see the sand sitting on top of the silt and clay layers, so that was a bit of a surprise.”

Once installed, up to 14m of the pile will sit below water, with 3m above the water line and 16m below bed level. For the dolphin the CKE3000G and BSP CG300 will drive the central pile before the 61t carousel structure is lifted over it.

The carousel will then be used as the temporary works structure during the driving of the remaining six piles, then remain in place as the permanent structure. For the berth extension, the tubular piles, which weigh between 30 and 60t, are driven into the ground before being topped off in-situ. Work on the new cruise ship berth and dolphin at Portsmouth Harbour is expected to finish in 2020.

Speaking ahead of work starting, Matt Cox, SECH’s managing director said: “Our new CKE3000G represents a significant investment in our future and signals our continued commitment to the UK lifting and foundations sector. This first major contract highlights the CKE3000G’s excellent drum and slewing speeds, making it a very nimble crane for its size. It’s also a very solid, well-engineered machine, which makes it ideal for tunnelling, foundation and marine work, and I look forward to being able to take on yet more new and interesting work across the UK.” 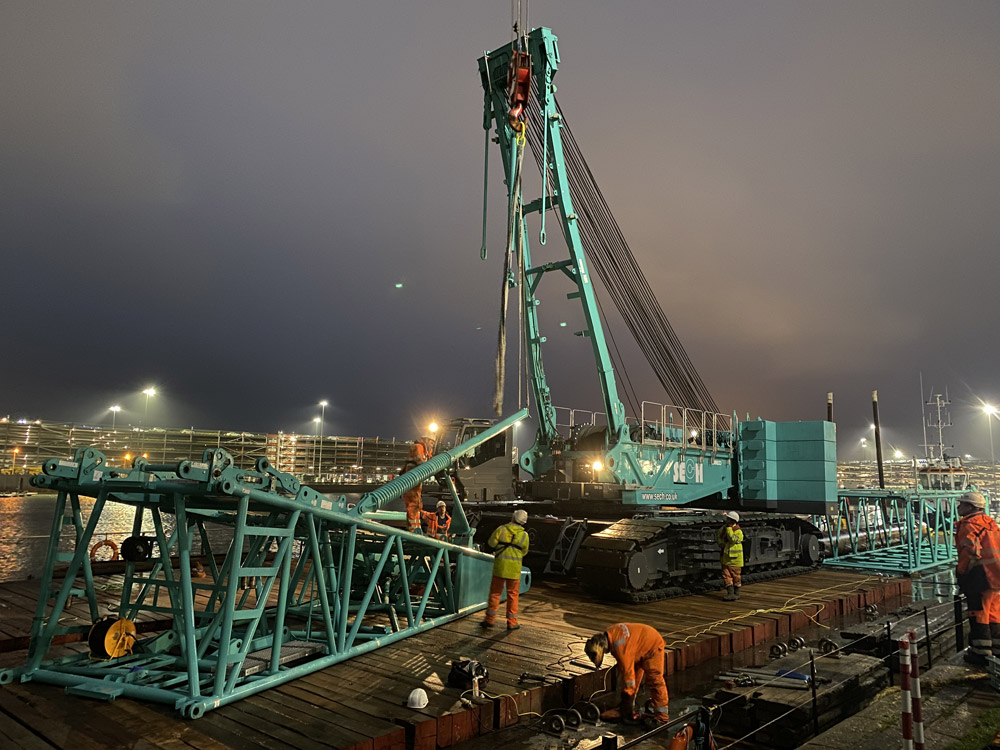