The All Family of Companies took delivery of the 1,000th Liebherr LTM 1200-5.1 mobile crane produced.

At its launch, the LTM 1200-5.1 was the first mobile crane in the world to feature pneumatic disc brakes. The pneumatic disc brake was installed in the crane axles after joint development between Liebherr and its system partners. Compared to the previously conventional drum brakes, disc brakes delivered improved braking performance and also enhanced braking control and the track stability of the vehicle. Longer maintenance intervals and shorter working times for changing the pads also meant improved economy.

“Over one thousand LTM 1200-5.1 cranes have now been sold around the world, making it one of the most successful cranes in the five-axle class,” said Liebherr.

Based in Cleveland, Ohio, the ALL Family of Companies is the largest privately-owned crane rental and sales organization in North America, with 36 branches operating under multiple names – ALL, Central, Dawes, Jeffers and ALT. The safety, product quality and flexibility of the LTM 1200-5.1 were major criteria behind ALL’s purchasing decision.

“We’re honoured to be receiving the 1,000th LTM 1200 and pleased to celebrate the moment with Liebherr,” said Michael Liptak, president and CEO of the ALL Family of Companies. 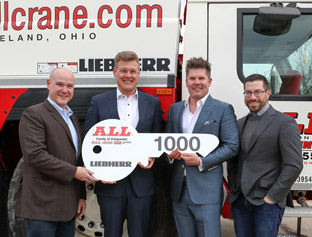