A fleet of Liebherr tower cranes is currently being used to build the three-tower LYFE business complex in the BneiBrak industrial zone in Israel.

Seven cranes are already onsite—the total could reach nine—as lead contractor Ashtrom Construction and Dan Real Estate approach the latest phase of a three-year project. The highest of the buildings, Tower C, will reach approximately 230m and include 52 storeys. The 34-storey Tower A, the smallest, will be 160m high, while Tower B sits in the middle at 173m with 36 floors.

Cranes have been provided throughout by Top Engineering & Equipment, the representative of Liebherr tower cranes in Israel. The first crane assembly took place at the beginning of December 2018 and the last one will be dismantled by the end of 2021.

Each of the A and B towers is served by three 16t capacity external climbing Liebherr 190 HC-L 8/16 Litronic luffing tower cranes that were purchased outright by Ashtrom. At the time of going to press, those cranes were currently working at a freestanding height under hook of 71m to 76m, but they will reach 186m on Tower A and 200m on Tower B, with five to eight climbing steps, depending on final heights, and jib lengths ranging from 40m to 50m.

Tower C, which remains in the final stages of design, requires the site’s seventh Liebherr crane, a top-slewing Liebherr 280 EC-H 16 Litronic, this time rented to Ashtrom. It will be principally used to build the tower’s basement and floors for a commercial centre.

A Liebherr 190 HC-L 8/16 Litronic, also from Top Engineering’s fleet, will be positioned on the same tower as the 280 EC-H and climb to build the structure of the building; one or two additional 190 HC-L 8/16 Litronic cranes will work at a height under hook of over 200m, as the projectreaches its conclusion next year. 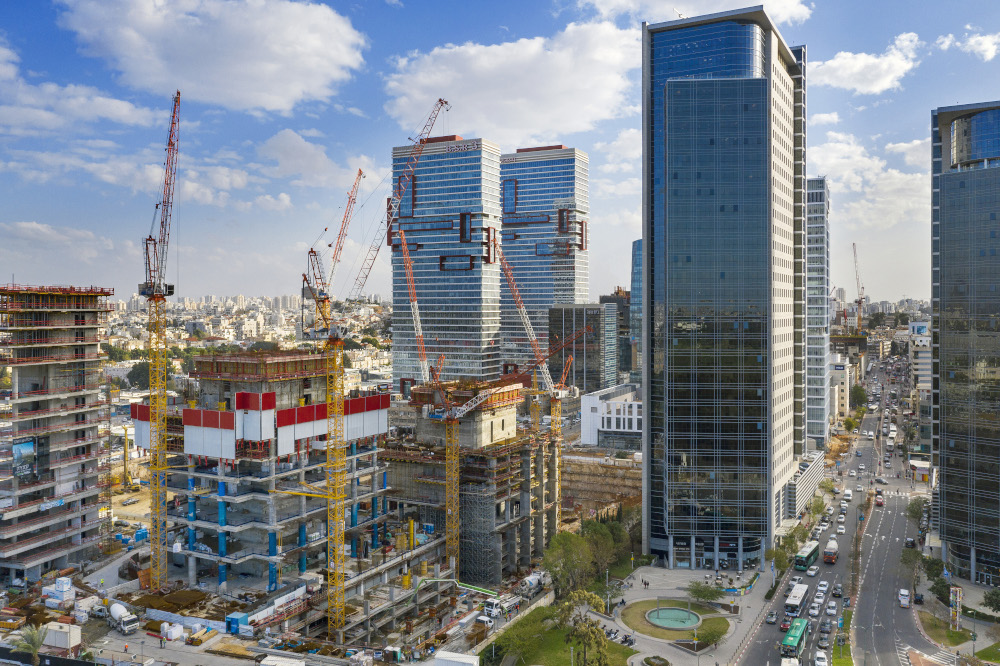