Anipsotiki has relied on Goldhofer transporters and special equipment since 2009. In addition to numerous towed and self-propelled heavy-duty modules in the THP and Addrive series, Goldhofer has primarily supplied various vehicles for transporting wind turbine components. With a fleet comprising several FTVs, pendular axle flatbeds and BladeX, Anipsotiki has erected 119 wind farms to date. The company has transported no fewer than 366 wind turbine blades using Goldhofer FTV 300 and FTV 550 blade lifters.

In contrast to other cargo, which is placed on the deck of the transport vehicle, the turbine blade is mounted horizontally to the FTV blade lifter—in exactly the same way as it is ultimately mounted on the rotor hub. With the hydraulic tilt mechanism and 360° pivot system, the secured turbine blade can be erected up to an angle of 60° and rotated around its own axis as required.

In addition to avoiding the need for tree-felling on winding forest roads, the combined tilt and pivot feature makes for easy and aerodynamically safe progress on even the tightest bends on steep sections of the route without the blades being adversely affected by changes in the wind forces or angle of attack. For negotiating streets in built-up areas, the tilt mechanism is used to raise the blade high enough to pass over roadside obstacles such as roof eaves and trees, while lowering the blade provides safe passage under power lines and other structures with height restrictions for vehicles. 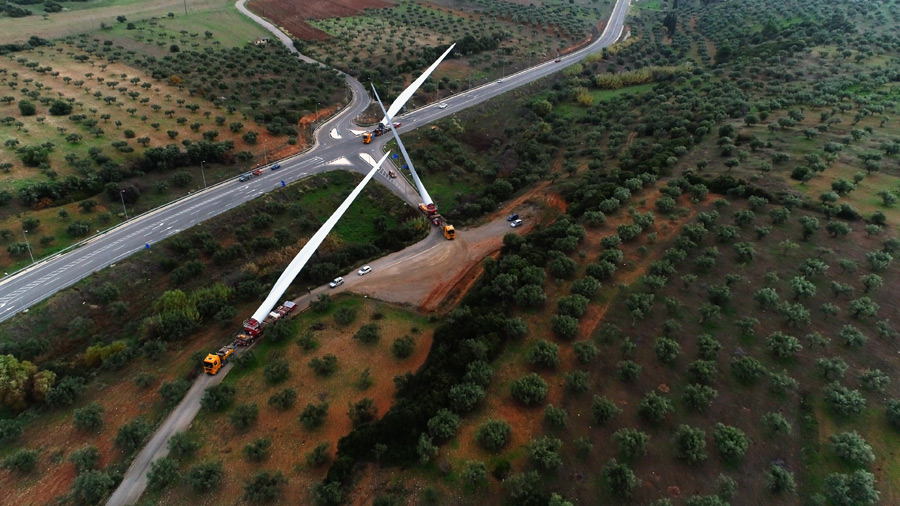