Raimondi had some surprises for Bauma attendees, as it unveiled the new LR273 luffing jib crane and showcased the slewing unit, cabin mast and counterjib of the upcoming MRT573—the manufacturer’s largest tower crane to date.

The LR273 in its standard configuration can work in two, three and four falls, while a single line extension will be offered as an optional add-on. The crane’s main hoist comes in two versions both with an optional emergency brake: 67kW and 86Kw. The luffing movement is delivered via a 75kW motor, while end users will appreciate the control of the inverter-driven slewing and counter-manoeuvre capability.

Domenico Ciano, newly promoted to CE, told Cranes Today that this crane is an evolution of the LR330 model, which was introduced last year at Intermat. He said the company started developing the LR273 last January based on feedback from North America and South Korea.

Having these markets in mind, the manufacturer focused on reducing the parking radius to match the requirements of customers working in congested and highly built-up areas.

“We worked a lot to reduce the out of service radius because it is a trend in the market. In outof- service position we can reach 88° with minimum radius around 2m,” said Ciano. He added that this crane meets the UK market demands as well. In fact, once dismantled, the unit at the Bauma stand was shipped to the exclusive UK Raimondi dealer Bennetts.

Stand visitors had the chance to see parts of the MRT573 presented at ground level. Manuela Granata, R&D manager at Raimondi told Cranes Today that this model has a maximum capacity of 24t and an 80m jib. She said they have worked on enhancing safety and studied ways to make mounting easier and quicker. This will be the first Raimondi crane with three motors. The cabin is different from other models, not only in shape but also in technology.

Raimondi’s largest ever crane could be mounted on a GR5H tower with pin connection or on a GR6L tower with bolt connection.

“It is worth mentioning that the LR273 and the MRT573 can both be used on the aforementioned towers without a transfer mast, a cost effective and simple solution we have implemented, but is not yet prevalent in the tower crane marketplace,” Ciano concluded. 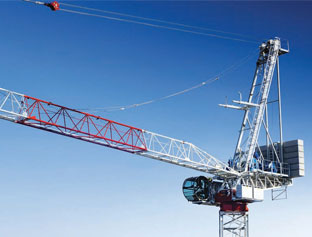