The firm had to position the 600t upper section of the jacket on top of the 900t lower section.

The challenge was to move both cranes with this load on the hook, while they were 70m apart, Liebherr said.

The company built a ground preparation structure: a special bed of sand with load distribution mats before fastening the load with two auxiliary cranes.

It then had to rig four 400t shackles in a confined space.

The crawlers tandem-lifted the jacket out of the support framework, with two guides ensuring that the distance between the two crawler cranes remained the same at all times.

Once the upper and lower sections were placed, the cranes continued to hold the load in place for two full days until the welding of the platforms was complete.

Schmidbauer used a 450t telescopic crane with luffing jib to remove the shackles and ropes at a height of 50m. 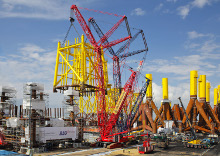