Tadano has commented on the company’s planned acquisition of Demag from Terex. While much will develop during the acquisition process, the company’s comments may give some insights into the future of the Japanese company’s two German mobile crane businesses, the former Faun in Lauf an der Pegnitz and Demag in Zweibrücken. More detail will come when the deal closes, which is expected to happen in mid-2019.

Cranes Today asked about the future of the two plants, and of similar models in their ranges. Chris McCabe, of Tadano’s corporate planning department in Takamatsu, said, “We are currently analyzing the model lineups, among other aspects of the respective businesses at Tadano Faun (TFG) and Demag, as we plan further. Once the acquisition deal is closed, we will be better able to field detailed questions about models and product lines.

“In addition to this effort to bring Demag into the Tadano Group, we will continue to put our strength into reviving the business at TFG. For the time being business at both TFG and Demag will continue as it does at present. We will deliberate further and have a plan ready by the time the acquisition deal is closed.”

The deal would see the number of major European telescopic all terrain crane manufacturers drop from four—Manitowoc Grove, Liebherr, Terex Demag, and Tadano Faun—to three. Tadano and Terex clearly wouldn’t have entered into a deal unless they expect it to be cleared. McCabe says, “We are currently seeking all necessary approvals (including anti-trust/anti competition regulations) in each related country. Upon receipt of such approvals we expect that the deal will close sometime during mid-2019.”

Cranes Today’s final question was about the leadership of the new business. Terex Cranes Germany’s managing director Thomas Schramm joined the business from Tadano’s Faun less than two years ago. McCabe says, “On this point also, we are deliberating and we will have a plan ready by the time the acquisition deal is closed.” 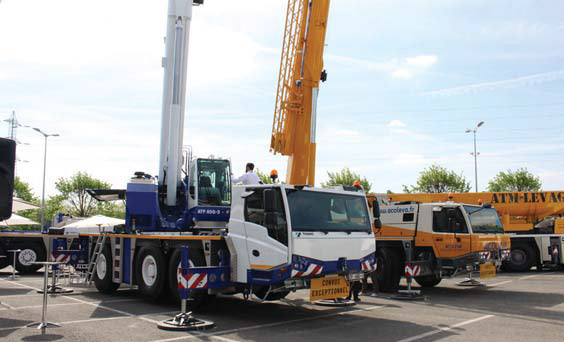 Tadano has more cranes under 100t than Demag, including the ATF60G-3, with its innovative single upper-mounted engine.