As the Crown Sydney construction project topped out, the Men from Marr’s (Marr Contracting) had to dismantle their bespoke M390D crane, which was working on site for the past 27 months.

Due to its location­—in a congested CBD waterfront space between the Harbour to the west and another construction site to the east—and the complex sculptural design, which required a lot of heavy lifting to build the structural elements for the low-rise gaming floor and 75-storey high-rise, the project needed a unique craneage solution.

“Having a long-standing working relationship with Crown’s construction partners, they got us in early to help come up with a solution. When they originally contacted us, their primary concern was borne out of a previous experience where the craneage solution wasn’t able to meet the demands of working at height in a high wind area like Barangaroo. The brief, in short, was to come up with a solution that would speed up the construction program without compromising on safety or quality,” said Marr’s managing director, Simon Marr.

The crane allowed lifts of up to 25t from ground level to the top of the tower in just over a minute, with the ability to work in the high winds prevalent at this elevation, which was one of the biggest challenges facing the construction team.

The M2480D heavy lifting luffing crane was also used for this project. The company calls it the world's largest capacity tower crane, as it has the ability to lift up to 330t in a single lift. The crane lifted the 100t steel reinforcing beams and 50t columns that formed the base of the structure in single lifts. Marr Contracting said this reduced the project’s build time, offered a safer method of construction and reduced complexity on site.

The M2480D also lifted heavy general machinery (such as excavators and drills rigs), saving the cost of crawler cranes.

Marr’s team also designed a three-beam internal climbing system to suit the jump-form construction methodology used on the project, which reduced the number of climbs and disruption to the project by approximately 30% with a typical 20m climbing cycle completed within two hours.

An additional M390D and M440D were also on-site to assist with the construction of the gaming floor and hotel.

Crown Sydney will open its doors in December 2020. 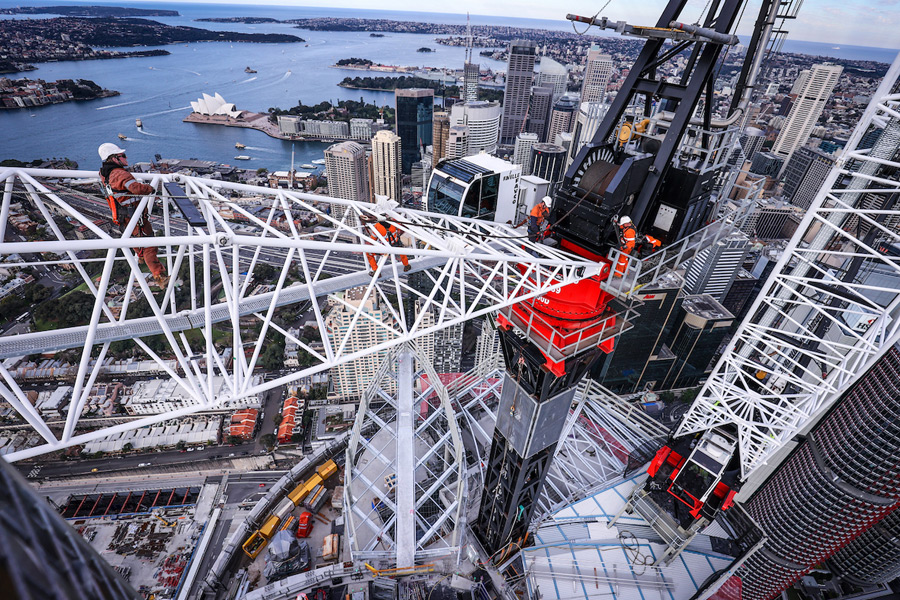