Five Liebherr tower cranes are being used on a refinery expansion project in Brazil; the first time towers have been used on an electro-mechanic project in the country.

The towers are being used for lifting duties on electro-mechanic assemblies at the Presidente Getúlio Vargas Refinery (Repar) for Petrobras. Construction consortium Conpar, comprising of contractor UTC, Odebrecht and OAS, said it selected to use towers for the lift operations ahead of traditional mobile cranes as they offered increased flexibility, mobility and safer operating conditions on the site. The use of towers has also resulted in a 30% decline in the number of mobile cranes needed on site. 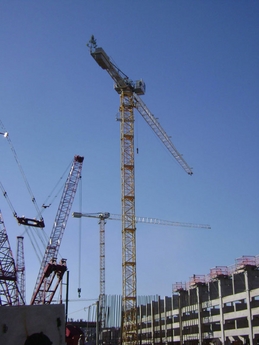 The cranes working on the Repar project, include two 110 EC-B 6 models, a 98.3 HC and two 26 K.1 models, including the first fast-erecting K-series crane delivered to Brazil. The towers have been strategically positioned around the six new gasoline and coking units being assembled, and are able to carry out duties across the 600m x 500m site, lifting and positioning the pipework assemblies.

Repar has a total crude oil capacity of 196,000 barrels per day, and is responsible for 12% of Brazil’s national production of petroleum by-products.