Working as one, for Tadano and Demag

At ConExpo, Tadano presented its strategy for the future of the Tadano and Demag brands. The two lines will stay distinct, but with a single sales and service network, and the company will begin to implement some Demag technologies on Tadano cranes.

Kenichi Sawada, chief commercial officer for Tadano, said: “The merger is infusing the best of both worlds working together as ‘One Tadano.’ Demag is now owned by a company who focuses solely on the lifting industry, and this holds significant benefit for customers.”

Tadano says that it has organised multiple cross-company teams with the mission to find and implement the best practices across the company and leverage technological and operational capabilities across Tadano. Demag integration in European operations has resulted in back-office departments like engineering, procurement, human resources, marketing and accounting being combined to better support Tadano and Demag as ‘One Tadano.’

Many regions have seen sales force realignment, the company says, allowing Tadano and Demag to deliver improved customer services and faster response times. New markets are being developed jointly between Tadano and Demag with combined back-office supporting processes being standardised.

The focus of the company’s ConExpo presentation was on Tadano America Corporation (TAC), and Sawada cited TAC as an example of the success of a ‘One Tadano’ strategy. TAC has combined the Tadano and Demag sales teams in North America to maximise sales coverage for rough terrain, all terrain and crawler cranes. The Demag sales operations and Tadano sales administration teams are also moving towards working under one Tadano America process. In addition to the marketing and customer service teams being combined, TAC is currently studying the Tadano and Demag parts distribution businesses to leverage synergies, the company said.

Ingo Schiller, president and CEO of TAC, explained the impact of the streamlined structure. The company has a number of dealers with overlapping territories in the region. It is currently rationalising this network to give a single point of contact for customers, covering both brands. As the company works to further integrate its network, customers will have a single point of contact for warranty issues, and it will move towards building a single source for parts; Schiller noted this was an ongoing process.

Schiller highlighted differences in the Tadano and Demag lines’ design, counterweight package and transport concept as reasons for retaining distinct lines. Jens Ennen, who now heads up both of the company’s Germany brands as president and CEO of Tadano Demag GmbH and Tadano Faun GmbH, said, “We will allow Tadano and Demag products to follow their normal lifecycle, launch new products and phase out old for both brands. As with other products that have been phased out, Tadano and Demag will continue to support these products and the customers who own them.”

While the company aims to keep the brands distinct, the engineering teams designing the cranes will be integrated and will jointly develop new equipment. One of the first examples of the cross-pollination of Demag and Tadano technology will come with a new telecrawler, the GTC-1800EX (GTC-2000 in North America), developed by the Demag engineering team (who showed a design concept for a large telecrawler at Bauma in 2019), and including Demag’s IC-1 Plus control system and IC-1 Remote telematics technology, but marketed as a Tadano crane.

Just as TAC will now form the sole point of contact for Tadano and Demag customers in the Americas, so the company has been integrating its structure in Europe, the Middle East, Africa and Russia.

As previously reported, the company has appointed new business heads in the UK and Italy and in Germany, Austria and Switzerland. All of these regions will be lead by Klaus Kröppel. Alongside Kröppel, but covering separate territories, will be Thomas Schramm, who will be in charge of sales for the Benelux countries, Russia, Asia Pacific, Turkey and France.

Christoph Kassner, who previously was head of sales in the German-speaking countries (known as DACH countries, in a pun on their country codes), will move over to heading up a new combined Tadano and Demag used cranes business.

A key part of the One Tadano strategy will be a single support network. Manfred Schlumberger has been appointed customer service director to head up this side of the business. Under Schlumberger, new combined management roles are being created. Schlumberger said: “This means that key departments such as training and customer service will be led by a single person, enabling us to be closer to our customers and take better advantage of synergistic effects.” 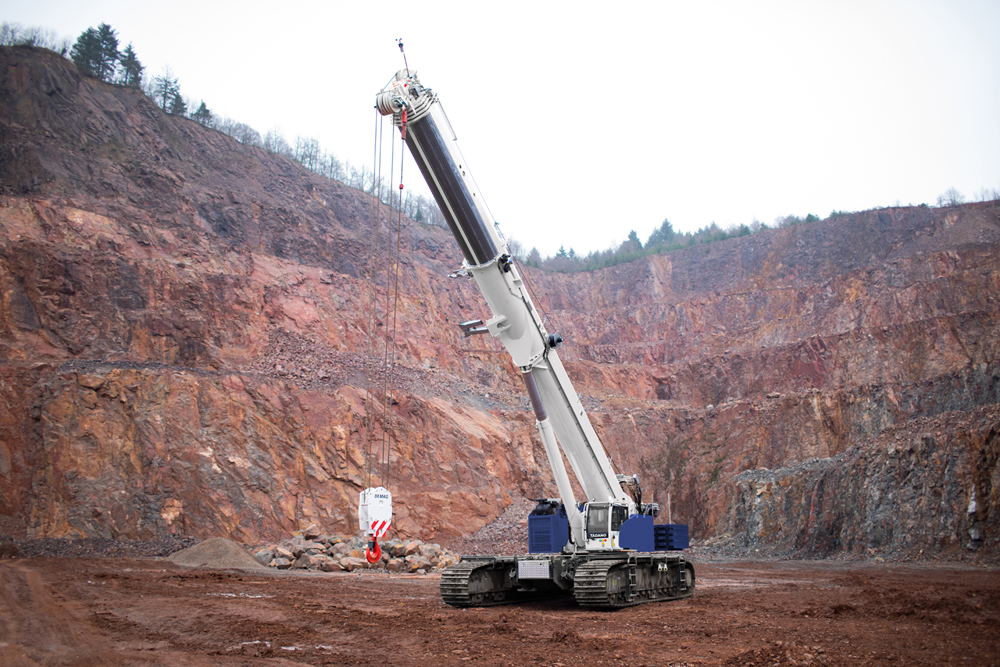 The GTC-1800-EX/GTC-2000 was developed by Demag engineers at Zweibrücken, and includes Demag’s IC-1 technology, but will be sold around the world in Tadano colours.