In November 1972 the first ever edition of Cranes Today magazine was published. This means, later this year, we will turn 50! To celebrate this golden anniversary, over the course of 2022, we will look back at some classic issues from across the decades. This will be in print, across our social media pages and on our website. Digital copies of archive issues will also be made available; if you're interested in obtaining one please get in touch.

In short, however, it was the support of the crane industry that made this magazine possible. Something that remains true today. For this support we sincerely thank you all.

Whilst looking through our archives, though, it struck me as to just how many big industry names have disappeared over the years. The changing fortunes of time are often on our mind as we enter a new year. Reflection on the past and hopes for the future...

In our January 1973 archive issue one advert in particular caught my eye. It's from Jones Cranes and is one of the few colour ads in the magazine. It comprises a hand-painted double page spread image of one of the company's cranes in its distinctive red livery. Apart from the nostalgia of seeing a hand-produced image in this digital age there is a certain sadness in the decline of this once 'virtually indestructible' brand.

The company was founded in 1915 by two Belgian industrialists, Jacques Drynn and Raoul Lahy, when it was known as K & L Steelfounders and Engineers. At first the company manufactured a whole range of things including steam locomotives, railway wagons and two-and three-axled trailers. It even attempted to make petrol-engined cars before finding success with its mobile and yard cranes.

In 1938 K & L dropped its original company name, renaming all its cranes under the tradename of Jones Cranes Limited. Jones Cranes enjoyed success in both the UK and internationally for decades. It was the rise of fierce foreign competition, however, that ultimately led to the brand's decline and closure in 1994. Should this be something to be wistful about? Perhaps not; it is the nature of business, after all.

Some big names from the past are also referenced in our Far East regional focus, written by contributor Stuart Anderson, and in Julian Champkin's look at the all terrain crane sector. So perhaps it's not just me in a reflective mood...

The end of one era does mean the start of another. We can see this in the offshore wind sector report, where Julian Champkin notes how rapidly wind has become an important source of energy around the world. He also looks at the next step in offshore wind production - floating wind farms which can be located in much deeper water and in prime wind spots.

Let's hope that in another 50 years people will still be reading Cranes Today – looking back at these latest developments with a positive sense of nostalgia. 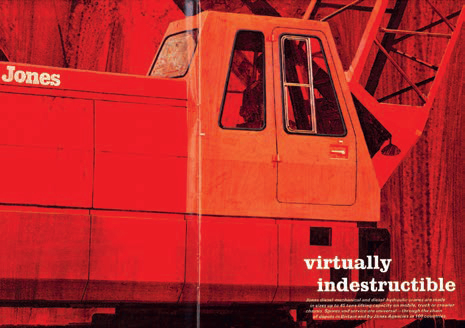