Last month I wrote that Graham Brent, CEO of the NCCCO Foundation, edited this magazine back in 1894. Of course, I meant 1984; even Graham's not quite that old!

Hours after the February issue went to press, though, I received a news release saying that Graham would be retiring later this year. Read the full announcement on p18. We wish Graham all the best for his retirement... and can confirm that he will be writing a short piece for this magazine as part of our 50-year anniversary celebrations in November.

Incredibly, currently 49-years-old, this magazine is the same age as the collapsed bridge shown on our front cover; I really hope that's as far any parallels go. The collapsed bridge is near Pittsburgh, Pennsylvania, USA, which is also known as the 'City of Bridges' as it has some 446 of them in the city. The bridge collapsed in January, just hours before President Biden was due there to talk about benefits his infrastructure bill would bring.

Biden visited the bridge collapse site, condemning the state of bridges across the US as 'simply unacceptable'. According to the US Federal Highway Administration, around 45,000 other bridges across the country are also in poor condition.

Highways and bridges are key elements of US infrastructure directly affecting the specialised transportation and construction industries. Read more about how Biden's infrastructure bill is impacting these areas in our feature with Chris Smith, vice president of transportation at the SC&RA on p20, where he explains the complexities of US infrastructure funding between state and federal governments with clarity. There is additional comment from Dean Barley, Tadano America president and COO and Ion Warner, VP, marketing and investor relations at Manitowoc, too.

You can also read how Allegheny Crane and Rigging recovered the wrecked red Port Authority bus seen on the cover (and inset image). We have some amazing additional video footage of the bus recovery on the new video section of our website (cranestodaymagazine.com/videos) and across on our social media channels.

Remaining with the SC&RA, on p20 Joel Dandrea, CEO of the Association for almost the last 21 years, speaks about the challenges the last two years have bought, as well as his vision for the future. Subjects covered include the SC&RA's work with the International Crane Stakeholders Assembly (ICSA), the state of US crane permitting regulations, how it's protecting its members from unfair regulations and legal decisions, and how it's working on other issues for the greater good.

Securing our future for the greater good is also the focus for our special report on environmental issues, starting on p34. The feature looks at the encouraging progress towards a carbon-neutral status that's being made by our traditionally diesel-dependant industry. We also bring breaking news of a new battery-powered crawler crane from Liebherr.

Another crane sector that's benefitting from both increasing environmental awareness and infrastructure development, is the rough terrain crane. In our RT feature, starting p28, Brian Elkins, product manager for rough terrain cranes at Kentucky-based Link-Belt, notes that "wind farm work is really taking off" for RTs, and that "infrastructure work has rebounded from the pandemic really quickly". I hope you enjoy the issue. 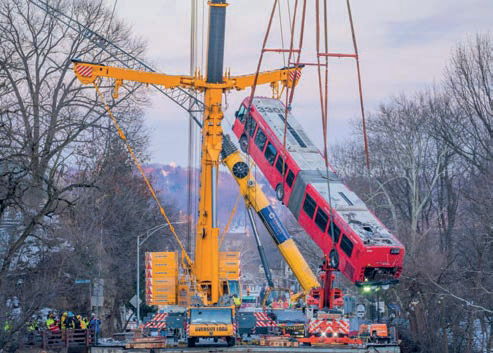