Reality Check: The Future Is Bright

It was great to see so many of you, old friends and new faces alike, at this year's Bauma show. To arrive in Munich just as our 50th anniversary issue was being released added to the thrill.

For us Bauma was amazing. The 'Bauma buzz' was well and truly back; positive vibes were plentiful.

It was the same for many of the exhibitors we spoke to. The general consensus was, although visitor numbers were slightly down, the quality of enquiries was up on previous years. For specific show stats see the news story.

The absence of trade shows over Covid certainly seems to have stimulated appetite for new equipment purchases; expect to see numerous post-Bauma sales stories online and in print over the following months.

One thing that came to the fore in meeting face-to-face again was how much you get to see beyond the glossy press releases and headline figures of shiny new equipment; instead you can really gain an insight into the passion of the individuals bringing these amazing machines to market.

For our mini crane sector feature, for example, we spoke to Alberto Franceschini, sales & marketing director at Italian company Jekko on the stand at Bauma. There Franceschini passionately outlined the philosophy behind the company's latest product, the SPX 328, with all the energy, focus and belief of an international football coach.

It was clear Jekko's latest innovation is more than just a machine to him; it is the future. Yet even for Franceschini, “seeing five years into the future is all we can claim to do.”

The future is also in focus in our Middle East feature. COP28 is scheduled for Dubai, UAE, in November/ December 2023 and sustainability is a current buzz word in the region. The feature also looks at other areas driving demand for cranes and transport across the Middle East.

Knucklebooms are under the spotlight. Here, too, passion for engineering is evident. Fabrice Coulon, head of Benelux company CML has made a business of rebuilding HMF cranes for the railway. It's not an easy job and one of his proudest achievements is producing two HMF 1630 knucklebooms mounted at each end of two railway wagons.

“There's no script for how to convert a truck crane into a railway crane,” Coulon enthuses. “It’s very demanding but also very motivating. It is almost as challenging as sending a rocket to the moon.” 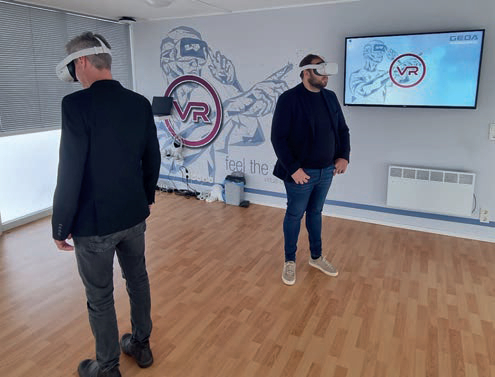 Editor Christian and sales director Joe had all angles covered at Bauma 2023. Photo was on Geda's stand where the company used VR to showcase its products range.