Above and below the ground

In recent months numerous infrastructure projects have been completed or progressed around the world; Sotiris Kanaris focuses on bridge and tunnel projects, finding a wide range of lifting and transportation equipment used.

Bridge construction can involve a lot of challenges; therefore numerous parameters have to be taken into account when choosing the lifting equipment for a job.

US company W.O. Grubb Crane Rental considered a crawler crane for a bridge replacement project in Lockhart, South Carolina, but factors such as the need to de-rig, move and set up the crane four times, made the use of a Demag AC 500-8 all terrain crane a more efficient choice. “It could not have been efficiently completed within the time frame needed with a crawler,” said assistant branch manager for W.O. Grubb Ken Dawson.

The operation required hoisting and placing concrete girders onto piers for construction of the new SC Highway 9/49 Broad River Bridge, which replaces a functionally obsolete, 730ft (222.5m) structure, where the piers dated back almost 100 years.

The crane had to cross uneven ground from the highway to river level, then manoeuvre into position on compact gravel crane pads constructed in the river.

Crew members then derigged the crane by removing the 396,800lb of counterweight in preparation for the move to the next pad. The crew retracted the main boom and kept the Sideways Superlift and outriggers installed.

The Demag crane lifted the girders from transport trucks in tandem with the assistance of one of the bridge contractor’s 200USt (180t) Link-Belt 248 HSL crawler crane.

An all terrain crane was also chosen for the installation of a new bridge over the River Goyt in Stockport, UK. The 40m span bridge forms part of a new offroad walking and cycling route linking Bredbury and Little Moor and joins two parts of Stockport’s existing National Cycle Network.

Ainscough Crane Hire was contacted by CTS Bridges to draw up a lifting plan for the project, as part of its work for main contractor Bethell Construction. A 750t Liebherr LTM1750-9.1 crane with 204t of counterweight was used to position the bridge into place.

Another recent UK infrastructure project Ainscough supplied cranes for, was the removal and replacement of two rail bridges along the Middlewich branch railway line, in works carried out for construction and engineering company J Murphy & Sons on behalf of Network Rail.

The two old bridges—located in Davensham, Cheshire—had to be replaced because of the condition of their decks. In order for the engineering works to be carried out, the railway line was closed for six days. Murphy prepared the disused line and existing structures before Ainscough arrived, so that the team could get to work straight away on lifting the steel sections out of place.

The project presented numerous challenges to the Ainscough team, largely due to the inclement weather conditions and the safety risk to nearby public access ways.

Working over a period of four days, two lift teams consisting of five members from Ainscough’s Leyland depot took delivery of the bridges on site, before lifting them into place.

The bridge decks weighed 90t and 34t and were 17m and 7m long. For the lift, Aisncough used its Demag CC 2800-1 crawler crane with a 72m SSL main boom and 300t of tray ballast. The total counterweight used was 540t, which was rigged three days prior to the lift taking place using a Liebherr LTM1100-5.2.

A CC 2800-1 from Sarens’s fleet, was also used for a UK bridge project. Victor Buyck commissioned Sarens to build and install a bridge in Bristol.

Sarens supplied small mobile cranes to build the bridge. Once built, the bridge had to be installed but the installation site had a limited space available for a crane to operate. Sarens’ team deployed CC2800-1 in SSL configuration with 84m main boom and 300t Superlift. The bridge section weighed 74t and the CC2800-1 lifted the bridge section at a radius of 62m.

Sometimes the best solution for bridge projects is not cranes but alternative lifting systems.

Sarens used four CS1000 jacking towers, 82 SPMT axles lines and twin barges Karel & Victor to install an entire 1,500t railroad bridge over the Albert Canal in Kuringen, Belgium. Because the operation was time-sensitive, the crew only had 12 hours to finish the job. Sarens successfully lifted the railroad bridge, which had been built on the quayside, and installed it over the water.

Although the installation itself was swift, the project plans were set six months prior to accommodate the necessary railroad and canal closures and ensure a smooth operation. Rigging the equipment took approximately eight days and 54 truck transports.

Sarens trucks transported all equipment, excluding the barge and deck equipment, from Sarens headquarters in Wolvertem and Ghent.

For the installation of a 550t pedestrian bridge in downtown Colorado Springs, USA, Mammoet— on behalf of Kiewit Infrastructure— used eight 500t Mega Jacks. Precise planning was required for this job, as the installation required crossing eleven railroad tracks. The railroad authorities gave an eight-hour work window to complete the entire installation of the bridge. The 76m prefabricated bridge was pre-assembled, welded together and given a concrete walking surface. Once on site, Mammoet’s team used eight 500t Mega Jacks to hoist the bridge close to 7m in the air to allow for the installation of SPMTs for transportation. Through this method, the bridge’s centre of gravity remained low while traversing the tracks.

A combination of wooden and steel mats was used to safely cross the railroad tracks and ensure there was no load bearing directly on them, as this could potentially damage the highly trafficked tracks.

Once the transportation phase of the project was completed, the bridge was jacked-down into its final installation location. It took Mammoet just under five hours to install the bridge and remove the 64 axle-lines of SPMT.

The first six out of a total of eleven bridge elements were moved by Schares in a nighttime operation. To lift them the company deployed two six-axle self-propelled vehicles, electronically-coupled in side-byside configuration, with a total payload capacity of 520t. Lifting the 14m long bridge elements by crane was not possible as it would have required the costly dismantling of electrical overhead lines by Deutsche Bahn at huge cost.

The Cometto Eco1000 advanced in a lowered position under the bridge ready to lift.

Excavator mattresses and load bearing blocks were mounted on the side-by-side self-propelled vehicle to compensate for the height of the bridge. The hydraulic bogies then lifted two bridge sections at a time from the bridge bearings. The manoeuvre was repeated three times. The bridge elements were then carried 30m to a mobile crane, which loaded them onto a flatbed trailer.

The 750km long ‘Autostrada A1’ highway is in the process of a major upgrade, with several tunnel projects, including one called ‘Santa Lucia’.

The 7,528m tunnel through the Apennine mountain range is located on the motorway section of the A1 between Barberino del Mugello and Calenzano in the Province of Florence.

Calabrese Autogru from Torino was given the task to transport the larger components of the tunnel boring machine (TBM) from the South entrance of the tunnel ‘Santa Lucia’ to the new motorway section called ‘Nuova Variante di Valico’.

For the transport of the bearing with a total weight of 320t and a diameter of 9,500mm, Calabrese Autogru used its 20-axles of Cometto MSPE self-propelled modular transporters with four 110kW Power Pack Units.

The flexible combination was assembled in a side-by-side configuration. On each end of the convoy, two Power Pack Units provided the necessary driving force.

The 20-axle combination type Cometto MSPE 2.43 with an axle load of 40t provides a total payload capacity of approximately 720t.

Another recent job involving a TBM, was the lifting of one for the Bombay Central Metro Station site in Mumbai. Indian crane service provider Steel Carriers mobilised its Demag AC 1000-9 all terrain for this task.

The job was to lift a 100t TBM at a radius of 20m from below the ground and bring it up to the surface. Steel Carriers opted for the all terrain because setting up a crawler crane under the tight space conditions of the job site would have taken significantly more time.

The load’s weight and the lift’s large radius meant that the all terrain had to be equipped with its full 228t counterweight for a boom length of 30m.

In order to avoid the Indian metropolis’s daily traffic, Steel Carriers took the all terrain and the trailers carrying its equipment from its workshop in Mumbai to the site late at night, with four trips every night. “The reason we had to split up the transport that way was that space at the work site was really tight, so having the crane come in with all its equipment at once was simply impossible,” said Sunil Makad, owner of Steel Carriers.

In the UK, two giant 2,000t, 558ft TBMs will soon begin drilling through 16km of chalk and flint to complete the Chilterns Tunnel, which will begin to the west of London just inside the M25 and end near South Heath in Buckinghamshire. This is part of the first phase of the HS2 rail project.

The two rings weigh 22t and have diameter of 10m, installed at a working radius of 28m. In order to complete the work, a 100t Liebherr LTM 1100-2 from Ainscough’s West London depot and a 450t LTM 1450-8.1 from Ainscough’s Heavy Cranes fleet were utilised to allow the rings to be ‘top and tailed.’ 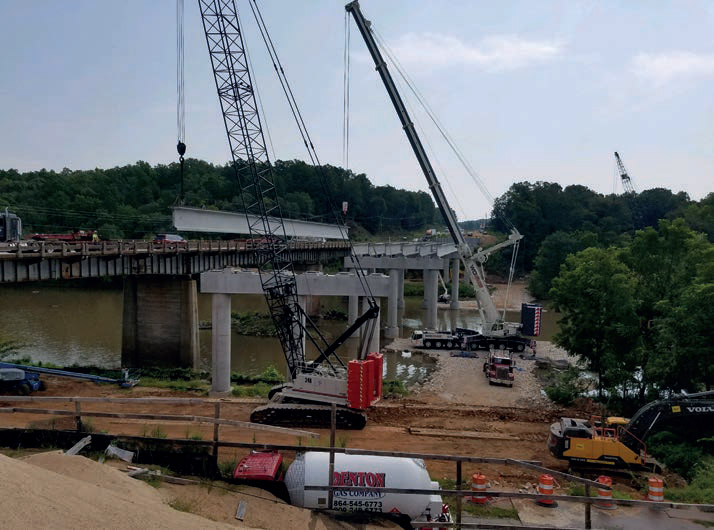 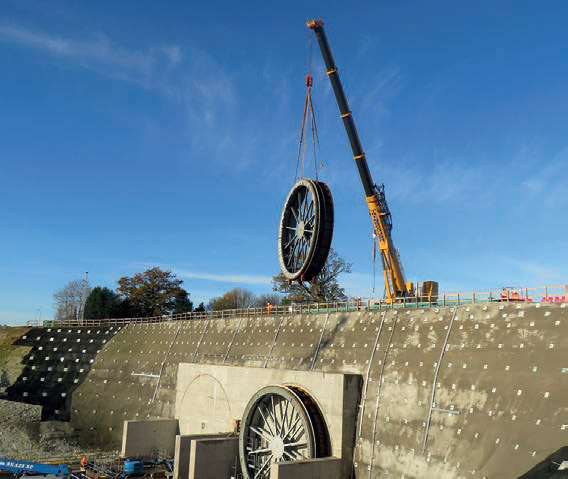 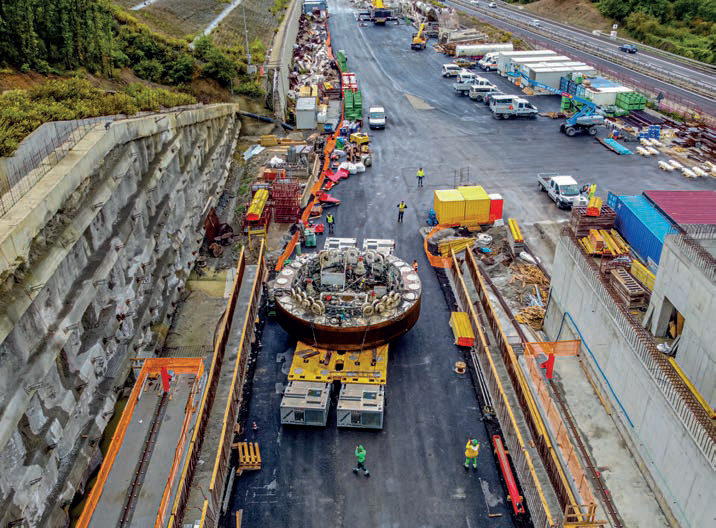 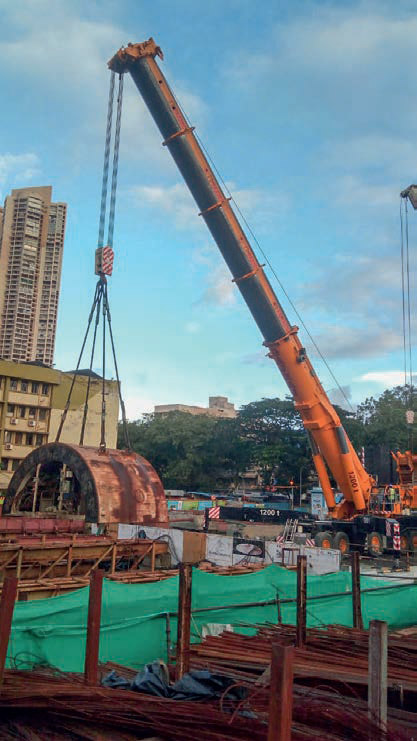