Crane control systems are changing – and changing much faster than the cranes they control. Julian Champkin reports.

Cranes are big and robust – and generally expensive – pieces of equipment. Being largely made of steel they can be expected to last a long time. With the systems that control them, though, it is quite otherwise. Digital technology has made huge strides in the last decade – even in the last couple of years; a crane that was state-of-the- art when it was installed even five years ago – let alone a decade ago – is now well outmoded in the way that it is operated.

Large process cranes were typically installed with cabs mounted high on the bridge, where the operator sat isolated and lonely and perhaps cramped and little shielded from weather. Today spacious and comfortable glass-panelled control rooms overlook the area of operation, and cameras capture close-up views of the hook, the load, the destination, and everything in between, from whatever angle and at whatever magnification that is wanted. Indeed, even the control-room is becoming obsolescent: Demag Crane & Components' ROS (Remote Operating Station) system does away with it altogether and lets the operator do his job from an office, from another building, or even from home, while screens show him what is happening at the end of the crane.

It is as true for small machines as it is for the largest. Pendant controls were standard, and in many applications still are, for light-capacity industrial overhead lifting systems. “But radio control is now just as reliable, no more expensive, and much, much safer,” says Michael Ainsworth, sales and marketing director of Irugasa, which has been distributing and installing remote controls for 20 years.

“If the operator doesn’t have to hold the pendant he can stay much further away from the load. And he can move around to the other side of it, to get a better view. It is more efficient, it is more economical, above all it is very much safer.”

Retro-fitting of new control systems to existing cranes is therefore a busy industry; as is the manufacture of radio-control units, anti-sway systems, anti-collision systems and the rest, as well as the sensors that feed data to the software’s algorithms. And new models, with new capabilities, are being introduced all the time. Thus Autec, whose hand-held or belly-box-operated remote control systems for cranes are well known, has brought out its new Lift series.

It is a handheld wireless control system designed for operating overhead cranes, jibs, hoists, and winches. Major strengths include new 2.4 GHz radio communication which uses Bluetooth to provide customised safety protection. State-of-the-art technology in the form of a smartphone app, for iOS and Android, called ‘My Lift Autec’, simplifies system management. Some operating modes, such as the operating distance and the power supply, can be customised to the application.

Models are available either with standard (3 x AAA) internal batteries or a rechargeable Li-ion external battery. It is ideal, says the company, for machines that require remote control with few and simple functions. The handset can be configured with 4, 6, or 8 pushbuttons as required.

Autec also has a new camera vision system, called AVS. It adds live video to the company’s Dynamic+P series of cableless remote controls, meaning that blind spots can be monitored in real time. Colour footage is transmitted to the handset or bellybox, where it appears on the 4.3” display screen. Up to four cameras can be used, with two showing simultaneously on the display. A distinguishing feature is the ‘images overlapping’ function. With this function camera images, machine data, and signals or alarms can be displayed simultaneously, either side by side or overlapping. “This is a remarkable advantage for monitoring all of the machine’s parameters, and for carrying out precise movements and simultaneously supervising movements and possible hindrances,” says Marco Chemello of Autec’s marketing department.

“Another important characteristic is the very low latency of the system, of about 100/120ms, which allows the user to immediately evaluate critical situations and solve them without delay.”

Three standard units make up the system: a Power and Acquisition Unit (PAU), an access point, and a video camera. Two types of camera are available, the Elite (752x582 pixels) and the higher-resolution Select (976x582 pixels); or existing cameras on the crane can be connected (after checking compatibility with Autec), since the camera connector is the standard M12 type. The system also has infrared sensors for low-light conditions.

Similarly, REMdevice, another Italian company, has been making radio controls for cranes and other machinery since 2003. “Our DCS10 remote control has been designed for industrial lifting and the mechanics and automation sectors where safety and attention to complex manoeuvres are particularly needed,” says Denni Toniolo of their marketing department. “A particular application is for where several machines are operating together but where it is difficult or impossible to interconnect them through classic cables.”

Remote controls often have to operate in harsh environments, outdoors and inside; protection here is an REMdevice speciality. “We take particular care to seal our control boxes against external agents such as dust, water and dirt to protect the integrity of all electronic components,” says Toniolo.

To that end, REMdevices do not even have external ports for battery-charging. “Such contacts become points of weakness and criticality in the device,” he says. “Our unique feature, which most distinguishes us from other manufacturers, is the patented technology of induction recharging. It allows us to have no external battery case or charging port, thus bringing durability, safety and robustness to all of the remote control boxes we manufacture. The total absence of external battery contacts and connections, and the use of techno-polymers such as nylon loaded with glass fibres and special rubbers, make all REMdevice radio controls compliant in class IP65 and give tenacity even in the hardest environmental and industrial conditions.

“In addition, our electronics consume very little power, so that a single battery charge has a duration of up to 40 hours of actual work – which is comforting to those who have to use a radio control every day. REMdevice gives a 36-month total warranty, which includes the battery pack.”

Now is a good time to be in the crane refurbishment business. That is especially true if you are refurbishing offshore or dockside cranes – for which upgrading the control system is often the main motivation for the project. Robin Thomas is western hemisphere director at Alatas, which does exactly that. “Different industries have been adopting automation and big data analysis at different times,” he says. “Port installations and offshore crane operators are adopting it now.”

As with onshore equipment, cranes such as these are large lumps of metal that generally last a long time, while control system obsolescence comes quickly. “Many ports have a mix of new cranes and older ones that date back to the 1980s or even earlier. Some shipyard cranes date from the boom that came after the second world war. The new cranes have all the latest automation and digital data sensors. The older ones were probably directly hydraulically controlled when they were first installed and may since have had an upgrade to logic systems that depend on relays, which were the latest thing in the pre-digital days of 40 years ago.

“But right now is when all this is starting to change. Port operators are demanding the huge data streams from their cranes that digital sensors provide. They expect the vast amounts of performance and risk-analysis data that machine-learning software can give them at the touch of a button. They want a continuous stream of speed and temperature and vibration and load and strain data; and the pre-digital control systems are just not compatible with that. But the metal hardware of old cranes is often still perfectly serviceable. So rather than spend six million euros on a new crane they spend perhaps two million euros to refurbish and upgrade the old ones and give them modern digital control systems; which is where we come in.

“And offshore, North Sea safety regulations require such things as automatic overload protection, so that if your crane hook catches on a supply boat and tries to lift it, the rope is released from the winch instead of continuing to tighten and capsizing the crane or the support vessel - which has happened. And digital is the only real way to provide that protection. So offshore operators also need the latest control systems. We do the upgrading.”

Mohammed Ahmad, automation engineering lead at Alatas, takes up the story: “So what we do is strip out the old systems and install fibre-optic cabling, sensors, cameras, software, all the works; and we might add a new cabin where the operator can do everything with joysticks instead of hydraulic levers and see everything on screens. And, of course, we replace any worn-out parts of the hardware – bearings, gearboxes and the like – while we are at it. We put in encoders that measure rope and winch speed, and angle sensors on the boom, and load cells which measure the strain on the ropes; and feed all their data back to a PLC (programmable logic controller). It is like taking an old ‘70s Mustang car and putting Ferrari electronics into it.”

Ahmad has recently done exactly that to port installations in Bristol, UK. In October Alatas also completed the control system replacement on a Liebherr BOS 40/1200 offshore pedestal crane in the Dutch sector of the North Sea. New hydraulics, new PLC devices, screens and control panels and operators cabin have all been installed, and the crane has just completed its post-upgrade load test.

So overall, if you fancy being a control freak now would seem a good time to start. 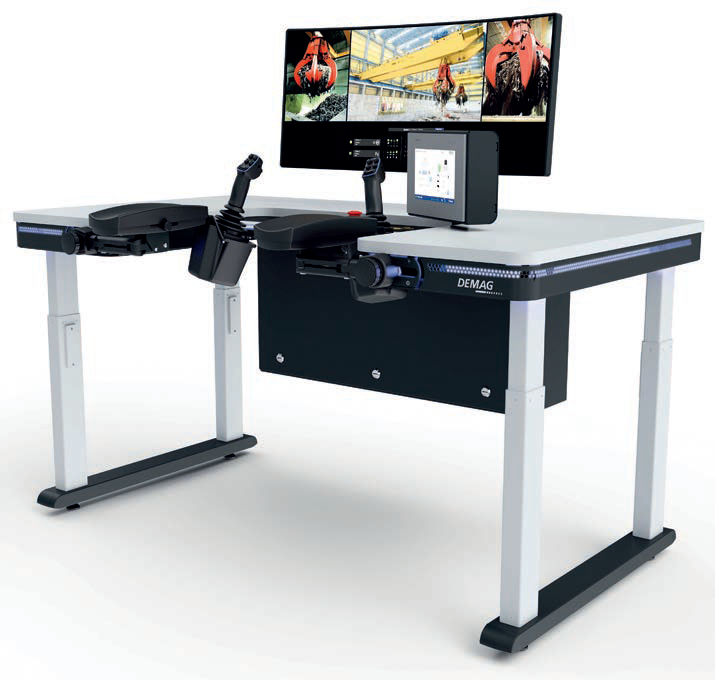 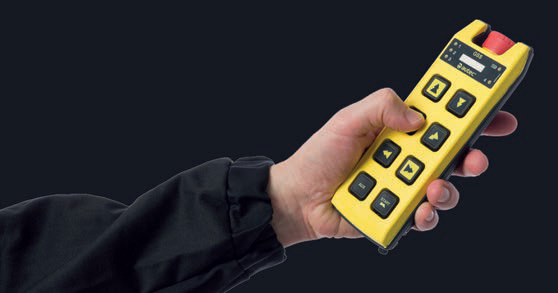 Simple hand control for the Lift from Autec 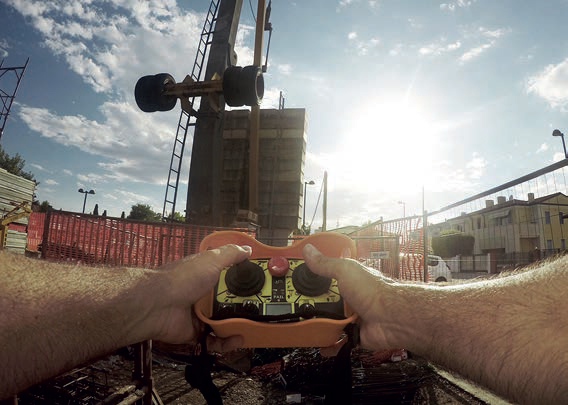 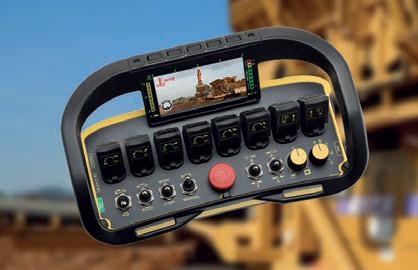 The operator’s view on Autec’s 4.3” display screen on the AVS 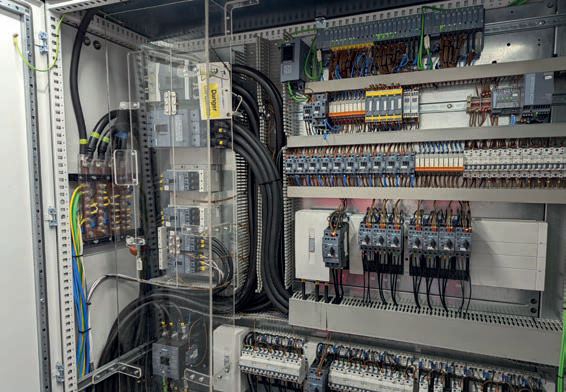