The New NY Bridge, replacing the 1955 Tappan Zee Bridge, has been planned since 1999. Over more than a decade, the project was delayed while more than 150 different concepts were discussed. The project moved forward in 2011, and the first span is due for completion in 2016.

Building the new bridge has required deployment of an extensive range of lifting equipment, including one of the world's biggest offshore cranes, along with many crawlers and mobile cranes, often mounted on barges.

The most striking piece of lifting equipment on the project was the I Lift NY barge crane (formerly, and formally, known as the Left Coast Lifter). The crane was built and installed in Shanghai, China, by ZPMC, on a barge built in Portland, Oregon. It was first used by an American Bridge/Fluor joint venture to lift prefabricated sections for the eastern span replacement of the San Francisco-Oakland Bay Bridge between 2010-2011.

In 2012, it was sold to to Tappan Zee Constructors (TZC) to work on the New NY bridge, and gained its new nickname. In late 2013 it set off for the East Coast, travelling via the Panama Canal.

On the Hudson, it is being used by TZC to lift sections of the new bridge weighing up to 1,100USt. The I Lift NY was joined on site by around 30 other cranes, almost half of which were Manitowocs.

These include a Manitowoc 11000-1 crawler crane loading and unloading supplies from barges; two Manitowoc 4600 Ringer cranes are doing pile driving work, driving sheets, setting concrete and casting forms, and performing form work; a Manitowoc 14000 cleaning piles and handling dig out chores; and a Manitowoc 999 using a clam bucket to handle clean out work for piles. 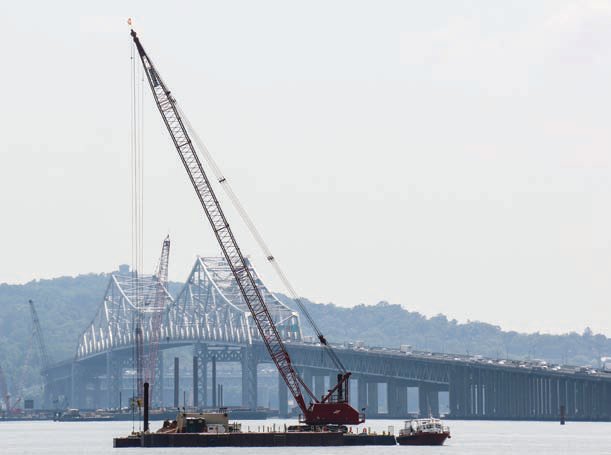 Here, and right: Manitowoc supplied 14 of the roughly 30 cranes on site 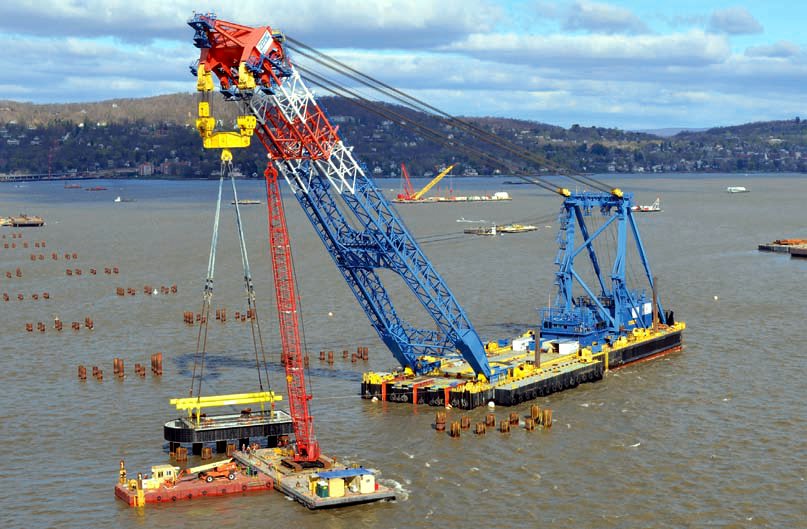 One of the largest approach span pile caps on the project is carefully placed onto a group of foundation piles by the I Lift NY super crane. 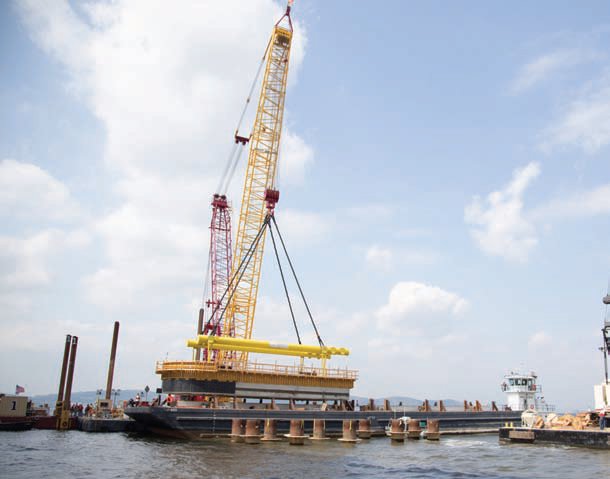 Installing a pile cap tub for the project‘s approach span.

I Lift NY passing underneath the Tappan Zee Bridge