Infrastructure funding: for the last few decades consecutive US presidents have talked about it but none have delivered… until now. With Biden’s Infrastructure Investment and Jobs Act being made law in November 2021, $1.3 trillion has now been pledged to multiple areas of America’s crumbling infrastructure.

Biden claims it will, “create millions of jobs, turn the climate crisis into an opportunity, and put us on a path to win the economic competition for the 21st Century.”

Covering all areas of US infrastructure, from roads and bridges to water and internet, the bill promises economic stimulus not seen since FDR’s New Deal spend after the Great Depression.

“We certainly support the bill on the economic stimulus front,” starts Chris Smith, VP Transportation at SC&RA. “More money for highway construction, for example, translates into more business and opportunities for our members.”

Before we delve into the details surrounding this money, though, we need to start by looking at the fundamentals of how infrastructure is funded in the USA to understand the opportunities, and challenges, arising from the infrastructure bill.

Federal funding in the States peaked in 1933 with FDK’s New Deal, which many economists claim led to the country then enjoying economic success over the following years.

There have been a few spikes in federal funding since then, the Interstate Highway era in the late 1950s being one such example. Since the 1980s, however, infrastructure spend has made up less and less of federal funding, leaving state and local governments struggling to cover more of the costs and maintenance themselves.

Today only a quarter of all public infrastructure spend comes from federal government, says the Center of Budget and Policy Priorities, and on a global level the USA is falling behind infrastructure investment levels compared to other countries.

When it comes to highways in particular, though, the implications of the bill become less straightforward as the importance of federal funding varies between states. “We have a federallyfunded but state-owned and stateoperated highway system where the states rely on federal money to fund the expansion, construction, expansion, maintenance and operation of not only the Interstate Highway system but the other highways they have built over the last 100 years,” outlines Smith. “The states have a lot of discretion on how to spend this money, plus that federal funding, depending on what state you're in, is either very important and a huge source of highway funding or a very small part of highway funding, as they otherwise rely on their own taxes and tolls. So across all 50 states you've got 50 different opinions on how that federal money should be spent.”

Another key point of the bill is to do with what Congress calls ‘authorization’. “This goes back to the core separation of power,” explains Smith. “Congress is authorising the executive branch, in this case the Department of Transportation (DoT), to spend certain amounts of money on certain things for certain amounts of time. Over the last 20-30 years the transportation bill has generally granted between a five-to six-year authorization to spend. This means at the end of that period either a new bill needs to be passed or an extension bill needs to go through. The reason it’s in place is because highways are both capital intensive and take time; you need security to plan a project out but it needs its limits, too.”

The down side is when the law runs out; Congress has to act to either renew the law or extend the law otherwise the DoT does not have the legal authority to give the states their money. And that's a big problem, too, because of what we call ‘government shut downs’.

Essentially this is where the law that allows the executive branch to spend runs out. Once this happens they can’t legally spend anything until Congress gives them the power to spend back to them.”

“We go through this process not only on highways but on all federally funded things. It’s particularly worrisome, however, for those states that rely heavily on federal money, as it undermines security; contractors aren’t going to want to work for you if you can't make good on that cash.”

From a policy perspective, too, the bill is set to fund some of the regulatory and grant programmes that affect specialised carriers.

“The trucking industry in the USA is federally regulated as it’s interstate commerce,” says Smith. “SC&RA members operating fleets in the States are subject to those federal rules, which are also tied up in the bill. At the SC&RA we have a good relationship with the Federal Motor Carrier Safety Administration ¬– the federal agency within the US DoT that regulates truck driving.

“We’ve worked together on hours of service rules to forge an exemption due to the specialised nature of what we do. We also support its new apprentice programme for truck drivers under the age of 21 which ties in with the apprentice schemes our members are doing to help address the driver shortage. And although these things didn’t necessarily come out of the bill, the bill has now helped make them official.

“Another point we agree with the Federal Motor Carrier Safety Administration on is to do with automated permitting. With the bill there are now grant programmes that states can now use above and beyond their core highway money. One of these is to encourage states to adopt innovations for truck safety, and federal government has said one such innovation you could use this money for would be an automated permitting system.

“That's great news for us because it’s one of the big dominoes to fall to get towards 50 state permit automation. And now that it’s a federal programme the states can’t say they don’t have the money to do it.”

Another area of interest for Smith and SC&RA members relates to weight rules between states. “We have a patchwork of states where the weight rules are different and it creates a nightmare for interstate commerce,” says Smith. “With the federal government usually only regulating the weight and size of trucks on the Interstates, some states have already allowed heavier trucks on their highways.

“In a few states, such as North Carolina and Mississippi, there are state highways which will be redefined as Interstates in a couple of years. The federal government is basically promoting a state highway to an Interstate. In doing so, however, they’ve realised that some state highways are already allowing heavier trucks already so if they made that highway an Interstate they’d be regressing on the weight rules.

“One of the things the bill enables is that heavier trucks will still be allowed to run on them even though they will officially be Interstates. The result of this could be really interesting as it could provide the trucking industry with hard data that Interstates really can handle heavier loads.”

With Biden’s development of infrastructure across the board there’s also focus on multimodal freight plans. This is an area Smith sees as a providing an opportunity for grass roots advocacy by SC&RA members. “Freight advisory committees are being formed to develop these plans; we say if you're planning for freight movement then let’s expand this to include planning for specialised freight movement. Give us a seat at the table and will help you make sure you don't make bad decisions. These committees provide a chance for SC&RA members to become involved and do some grassroots advocacy in their own states.”

So what happens next and when will the money be available to states and local agencies for construction work?

“Well, there’s one more winkle in the way American politics and processes work,” says Smith. “Remember how I said it was an authorization bill which granted the permission to spend? Well, the permission to spend is not the actual money itself. Authorization bills are only as good as the powers they have to spend. You need an appropriations bill each year to actually put the money in the account to make it happen. And the problem we're facing right now in Washington is that hasn't happened yet.”

The concern is, when faced with making hard decisions, Congress could revert to what Smith describes as “kicking the can down the road” by continuing to fund things at previous levels until there is agreement on how much to fund the higher levels.

“We're expecting all these construction opportunities but we need the money in the bank to make it happen,” Smith concludes. “Adding to this, it's a major congressional election here in the United States and that, in my experience, has meant that makes Congress even less likely to do things that are risky when they're running for re-election. One of the things you'll hear whispered around Washington is that things only get done on non-election years.”

So it seems it’s still more a case of ‘watch this space’ than ‘shovels in the soil’. In March, however, the White House reported that at around $100 billion has already been made available via a number of programmes so far. And with more money making its way through to states hopes for a spring time construction boom are high. 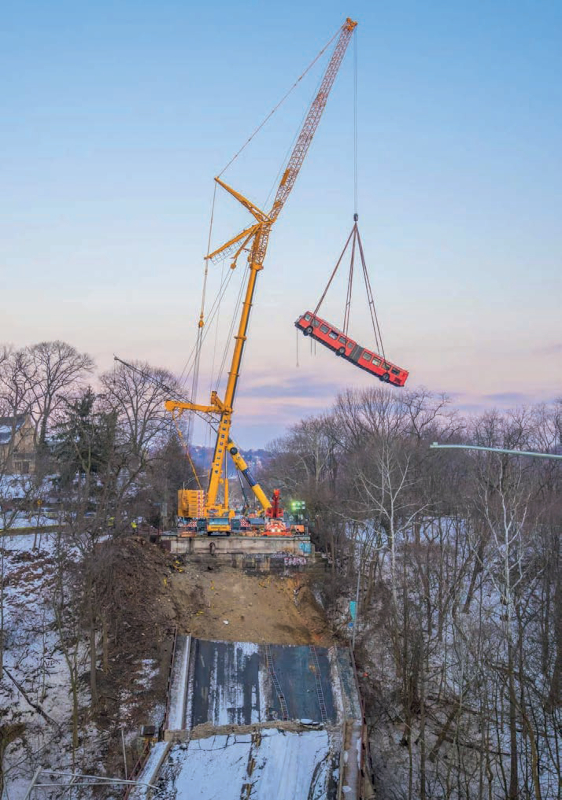 Biden was scheduled to visit Pittsburgh to speak about the infrastructure bill when, hours before his arrival, the nearby Fern Hollow Bridge collapsed, underscoring the urgency for infrastructure renewal. Pennsylvania-based crane rental firm Allegheny Crane and Rigging was involved with the recovery of a bus from the Fern Hollow Bridge Collapse in Pittsburgh, Pennsylvania. For the lift it used a Liebherr LTM 1350 with Y guides and 118’ of luffer. A Grove GMK275 Children’s Hospital crane was used as an auxiliary crane. The load weighed 44860lbs. For a video of the lift see the Cranes Today website: www. cranestodaymagazine.com/videos/ 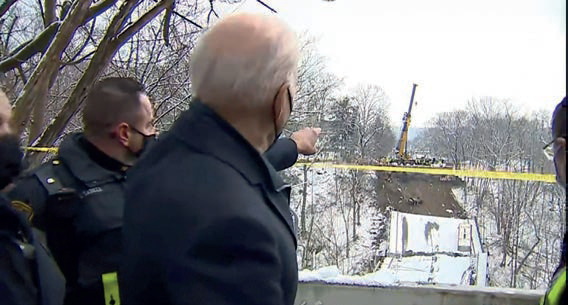