The passing of Biden’s infrastructure bill is already resulting in an upsurge in bridge building across the USA. Cranes Today reports.

In our March 2022 issue, when we last focussed on the North American continent, we ran a striking cover image of a Liebherr LTM 1350, owned by Pennsylvania-based crane rental firm Allegheny Crane and Rigging, recovering a bus from the collapsed Fern Hollow Bridge in Pittsburgh, USA. As part of the feature Chris Smith, VP of Transportation at the Specialized Carriers & Rigging Association (SC&RA), outlined some of the opportunities and challenges surrounding Biden’s $1.3 trillion infrastructure bill, which was on the verge of being passed…

The March issue was actually being printed when US president Joe Biden’s infrastructure bill was officially passed, meaning the single largest investment in America’s infrastructure in modern history was underway.

Although the infrastructure bill covers many different aspects of US infrastructure – everything from drinking water to high-speed internet – bridge building is high on the priority list, underscored by events such as the Fern Hollow Bridge collapse, plus the sheer number of bridges in poor condition across the USA.

According to the 2022 Bridge Report, conducted by the American Road and Transportation Builders Association, “36% of US bridges—nearly 224,000 spans—need repair work [and] 78,800 bridges should be replaced.” And as a result of Biden’s bill being passed the USA is now seeing the start of an uptick in bridge and overpass projects and high demand for heavy lifting equipment rental.

We start by returning to the Fern Hollow Bridge to see what progress has been made since March. Once the carnage of the collapsed bridge had been cleared, construction of a replacement began. 21 new pre-stressed concrete I-beams, 150 foot in length and 100 tons in weight, were made by Carlisle, Pennsylvania-based concrete specialist PennStress. They were then transported, on a journey taking five hours, from PennStress’s manufacturing base to Fern Hollow using TransMaster heavy haul trailers and dollies. Slingmax Twin- Path Roundslings were used to secure each end of the beams.

Road closures, a police escort, and the removal of route infrastructure were required for the transportation. According to the state Department of Transport the beams are the longest ever used in the area. The total length of the transportation, including the tractor, trailer and dolly, was 218 feet.

Towards the end of the route the oversized loads had to be driven in reverse along a section of the route. To do this an operator sat on the dolly and used a remote control to steer the load.

Once in position, US crane rental firm Maxim Crane Works lifted the beams into place. For this it used its new 770-ton capacity Manitowoc MLC650 VPC lattice boom crawler crane, controlled by operator Tony Chirico, plus the assistance of additional Maxim employees holding tie lines. According to Maxim, this was one of the first times the crane had been used in Western Pennsylvania.

The beams were lifted from the trailers and rotated 90 degrees before being lowered into position and secured with chains. Then smaller 380 ton capacity cranes, positioned on the valley floor placed the beams into their final position.

Once the first two sets of beams were placed Maxim disassembled the MLC650 VPC and reassembled it on the Point Breeze end of the bridge where the last seven beams are being placed.

“The speed of this thing, where it’s at, is amazing… in less than six months we’re setting beams on a structure that collapsed at the end of January,” commented Greg Gorman, president of PennStress.

A top official at Pennsylvania’s DoT, Cheryl Moon-Sirianni, said she hopes the project will be completed by the end of the year. “We are dealing with the same supply-chain issues as everybody else but we are super excited that the project is moving this fast.”

“Our unique offering of rapid bridge construction and demolition equipment on demand is bridging the gap during the bridge boom,” said Mike Beres, director of business equipment rental and sales at Engineered Rigging.

Engineered Rigging offers equipment rentals, engineering expertise, and design-build solutions which, it says, have contributed to the success of several recent bridge projects including the tallest bridge in Kentucky, the Wittpenn Bridge in New Jersey, the Texas trio of Panther Island Bridges, and the Cline Avenue Bridge in East Chicago.

The Kentucky bridge job (see JotM in the July 2022 isssue), conducted in partnership with Endicott, Kentucky-headquartered contractor Bush & Burchett, was of note for a number of reasons. Not only have the two companies constructed the tallest bridge in the state of Kentucky, and one of the tallest traffic bridges in the country, but the jobsite’s tough terrain and steep slopes meant they utilised an incremental bridge launching technique to construct it. This technique is more commonly seen in Europe and is typically used when a bridge is very high and access via traditional cranes is difficult. Indeed, Engineered Rigging says that this was the first time this technique had ever been used in Kentucky.

The steel bridge was therefore built on the embankment and the girders incrementally moved into position on eight sets of piers.

As construction of one section of girders was completed in the launch bay, the strand jack system was used to pull it onto the bridge pier, thus allowing the next section of the bridge to be constructed on the embankment.

In total, ten jacking evolutions were necessary to pull the entire bridge into position. The pulling weight for the first pull was approximately 16,000 lbs, and the bridge became heavier with each subsequent pull, the heaviest reaching 80,000 lbs. Pulling force is a function of how easily the bridge slides on the Hilman rollers and the dead weight of the steel span.

Accuracy was key, as there was a very small margin for tolerances – with only about half an inch gap on each pier. There were some issues with this on the eastbound launch – where any lateral movement of the girders or minimal inconsistencies in their fabrication led to rollers not lining up with the gap in the splice plates – but these problems were resolved on the westbound bridge with modification of the splice plates.

Engineered Rigging has also used its strand jacks to help prime contractor Johnson Bros. Corporation construct a new 745-foot-long bridge in Peoria, Illinois. The new McClugage Bridge was to replace the original steel cantilever bridge that had been built in 1939, carrying the US Route 150 highway over Upper Peoria Lake and Peoria Lake, part of the Illinois River. Weather, snow removal salt and use by more than 20,000 vehicles a day has taken its toll.

Construction started with the production of 22 new concrete piers designed to support the bridge over the waterway. Each pier is 11 feet thick and rises 30 to 40 feet in the air. Eight 200-ton Engineered Rigging strand jacks were used to support the pier foundations during the construction phase. Due to unforeseeable delays the strand jacks were needed on site for longer than anticipated but thanks to the size of Engineered Rigging’s heavy lifting rental fleet this was not a problem. “We were able to be flexible and accommodate Johnson Bros.’ needs,” Beres added.

Another heavy lift specialist carrying out bridge work in the USA is Mammoet USA which used its Mega Jack 300 cradle system for the first time on the Veranda Street Bridge in Portland, Maine. The 60-year-old bridge is one of the most heavily travelled in the state, carrying around 55,000 vehicles per day on the I-295. It was deemed structurally deficient back in 2017. Furthermore, the roadway configuration below the bridge was confusing for drivers which caused several intersection crashes and was classified as a high frequency accident location.

To increase safety and to minimise impact to highway traffic, an Accelerated Bridge Construction (ABC) plan was implemented for the project which allowed for a 60-hour highway closure. The method of ABC selected for this project by Cianbro Corporation, the lead contractor on the job, involved building the upper portion of the new bridge to the side of the existing one on temporary supports. Normally, this approach requires both lifting equipment and falsework to successfully set the bridge – however Mammoet says its Mega Jack 300 vastly reduced steel mobilisation and helped complete work two-and-a-half hours early.

The new spans were built on temporary abutments approximately 60 metres away from the permanent installation location. In the days leading up to the closure weekend Mammoet used the Mega Jack 300 SPMT cradle system to jack up each of the bridge spans to the required elevation, which was approximately 7.6 metres (25 ft) high.

Once lifted, each trailer configuration was fastened, relocated out of the way, and temporarily staged until the closure weekend. Raising the bridge sections to their required height prior to execution day provided greater insurance that the job would be completed during the short available time window, while the cost of this was small compared to mobilising steel falsework to site.

Once the demolition of the old bridge and subsequent clean up were complete, Mammoet successfully drove each 24m x 14m (78 ft x 45 ft) bridge section into location above pre-built permanent abutments and lowered it into position. The team was allotted 12 hours to move both the southbound and northbound spans into place and set them; however, this was accomplished in only 9.5 hours.

Mammoet’s Mega Jack 300 cradle system is integrated in that it allows the jacks to sit in cradles which are built inside the trailer. The system allows for building low to the ground which Mammoet says ensures a higher level of safety and more control. This also means far less metal needs to be mobilised to site to support bridges during construction.

Each 400t (800,000 lbs.) bridge span was jacked up 5.4 metres (18 ft) in total. The 14 cassettes in the modular jacking system raised the bottom of support girder approximately 6 metres (20 ft) off the ground, with the girder itself providing the remaining elevation. Each span was precisely moved on 24 axle-lines of SPMT in a 3 x 4 configuration before being set into position, aligned, and lowered. Mammoet employed a crew of six, plus three iron workers.

The project was executed ahead of schedule and without incident or injury. The new bridge is designed to last for the next 100 years. This was the first accelerated bridge construction (ABC) project ever completed in Maine. A video of the job can be seen here:

So it seems the US bridge building boom is also providing the opportunity for those companies involved to try out new technology and techniques. Whether it’s transporting the longest concrete beams ever seen in Pittsburgh in reverse to the jobsite, utilising incremental bridge launching for the first time in Kentucky to build the state’s tallest bridge, or the implementation of the ABC approach and first use of the Mega Jack 300 cradle system – the opportunity to build back better is being realised. 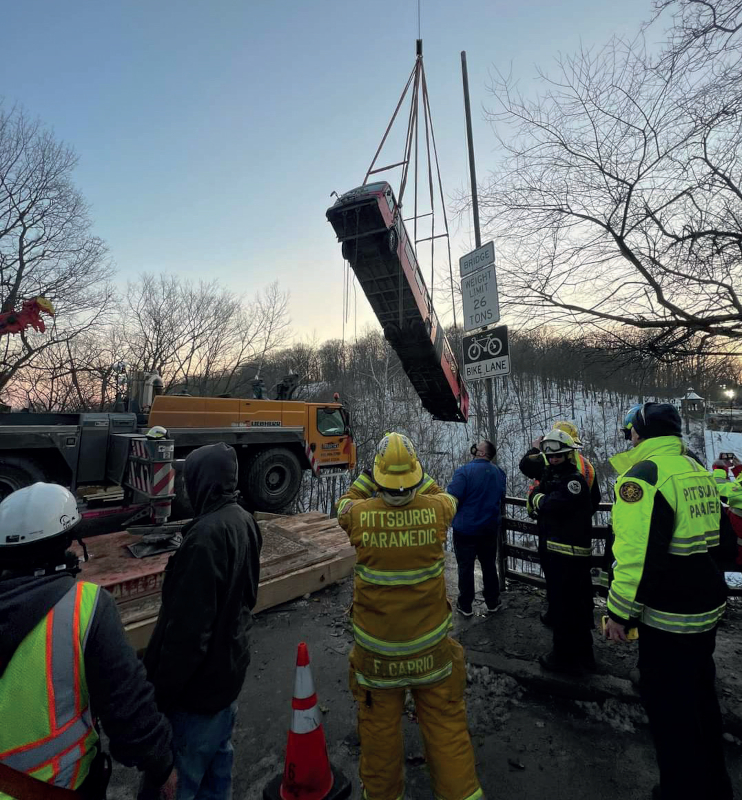 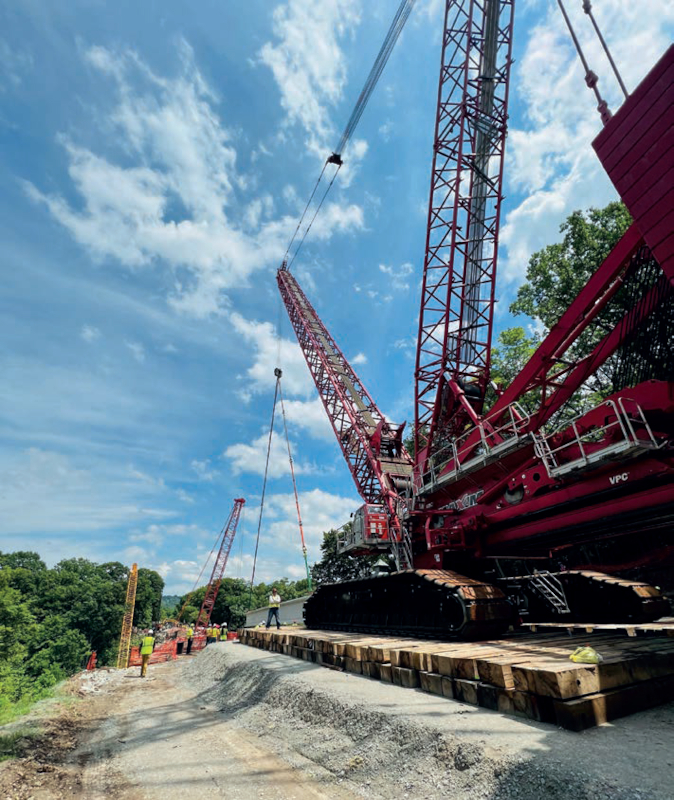 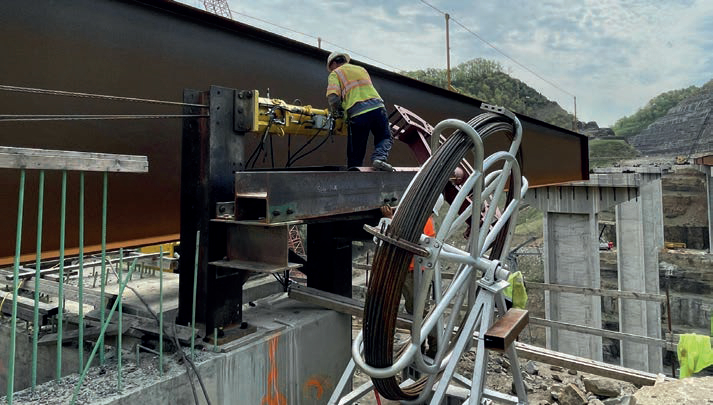 Engineered Rigging used incremental bridge launching technique to construct what is now the tallest bridge in Kentucky. This was the first time this technique had ever been used in the state. 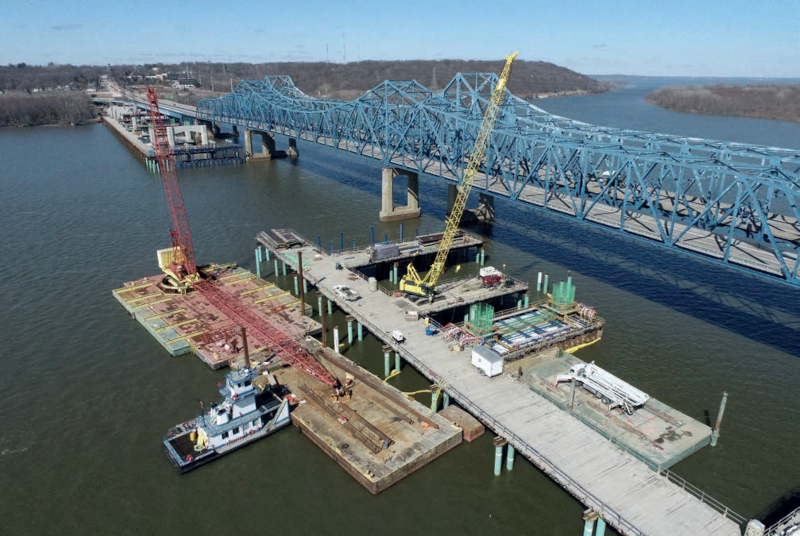 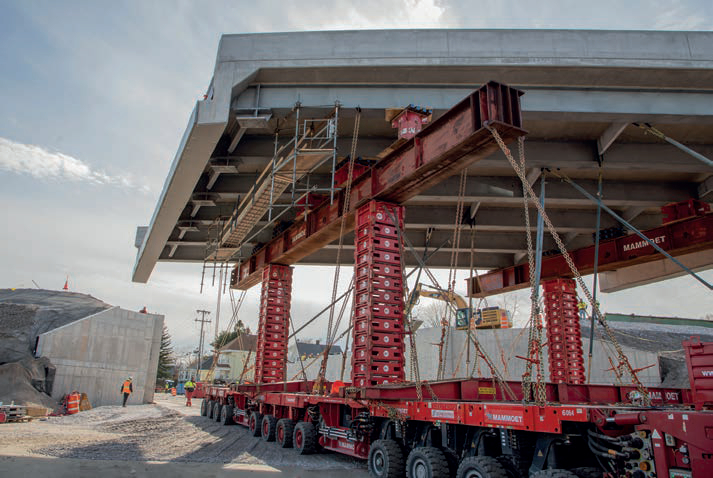