A snapshot of the current lifting and transportation industry in Germany. Christian Shelton reports

The outlook for the wider German construction market looks positive. In August statistics released by Germany’s Federal Statistical Office (Destatis) showed that turnover in the whole of the country’s construction industry in May 2021 was up 3.4 percent compared with a year previously.

Correspondingly, employment in the construction sector over the same period was up, too, showing a +2.2 percent rise compared to the previous year.

This positive trend is echoed by current market reports which highlight the continued growth of the residential sector, active government initiatives to develop the country's transport and energy infrastructures, plus prestige projects – such as the Fehmarn belt underwater tunnel between Germany and Denmark – as all underpinning growth. This growth is estimated to be around 2.3 percent between 2022 and 2025.

More specifically, within the lifting and specialist transportation sectors, German construction trade press reports further confirm this positivity. The excellent July/ August issue of Kran & Bühne magazine, for example, contains analysis of the top crane rental companies in the German, Swiss and Austrian markets and notes the expansion of most of the large German tower crane rental agencies over the last year, with minimal acquisitions or takeovers. This favourable perspective from the rental sector is underscored by manufacturer optimism, too. According to Liebherr, the German crawler crane market, which had been developing steadily prior to 2020, showed little change during the coronavirus crisis and has actually increased in 2021. “For our mobile and crawler cranes made in Ehingen we had a great first half year of 2021,” says Tobias Ilg, head of marketing mobile and crawler cranes. “Orders are high, especially in the larger crane segment (crawler cranes above 800 tonnes) and mobile cranes from LTM 1450-8.1 onwards.”

Ilg identifies the cumulative effect of federal investment programmes from several countries in the western world as driving demand in a cumulative way. “Lots of these billion-USD programmes contain large portions for things like renewable energy and electric cars,” Ilg explains. “This leads to a higher demand for energy, so more investments in the energy sector are made. This results in a higher demand for cranes, particularly with the wind market coming back so rapidly.

“More wind turbines have to be installed both on land and offshore to reach climate targets – and this leads to more cranes which are used for the erecting them on land and handling components in ports.

“Germany is one of the countries that now has a big federal budget to overcome the Corona crisis, with many investments in the infrastructure and energy markets being made. As a result we have about one LTM 1650-8.1 [eight-axle mobile crane] leaving the factory every week. The majority of these are being used in Germany and the surrounding countries.”

In Liebherr Biberach, where the company’s tower cranes are manufactured, tower cranes sales have also increased during 2021 despite shortages in material as well as human resources.

The company was commissioned by German oil refinery Bayernoil, which supplies oil to Bavaria and northern Austria, to transport two heavy reactors weighing 660 and 600 tonnes respectively.

With ancillary equipment, the total on-road weight for each reactor was 880 tonnes.

In successfully moving the reactors Schmidbauer proudly claims the record for the heaviest road transport in Germany. It also believes it carried out Germany's heaviest single lift when unloading them using its Demag CC 8800-1.

The reactors were transported 30 km from the port of Kelheim to Neustadt a. d. Donau in four stages. The number of stages was kept low in order to reduce traffic disruption, said Schmidbauer.

The size of the reactors added to the challenge; measuring 37 metres long, 8.2 metres high, and 6.6 metres wide they had to pass over bridges, through narrow streets, up steep inclines, and meet strict time windows so as not to cause further disruption.

The contract was awarded to Schmidbauer in December 2020, leaving the company just six months to prepare. This included carrying out advance feasibility studies, geotechnical reports, plus stability and structural analysis investigations.

Another time-related change came from the use of Schmidbauer’s Tadano Demag CC 8800-1 crawler crane which was used at both ends of the transportation route for loading/ unloading duties.

At the start it was lifted the reactors from the vessel they arrived on and set them onto two self-propelled modular transporters (SPMTs). The crane’s crew then had just a few days to dismantle it, transport it to the end of the route, and rebuild it in order to unload the reactors and set them in position.

The four transport stages took place back-to-back around the clock and were manned by driving personnel, project escorts, and security who were tasked with keeping onlookers from getting too close.

Despite Schmidbauer’s detailed planning, a further challenge out of its control came in the form of heavy rain at the start of the first stage. This caused only minor delays, though, said Schmidbauer. If the bad weather had continued onto the second stage it could have caused traction problems ascending eight degrees incline but fortunately the rain stopped before then, Schmidbauer added.

When the reactors arrived at their destination, the Demag CC 8800-1 carried out what Schmidbauer believes is Germany’s heaviest single lift, lifting 700 tonnes at a radius of 26 metres. A Demag CC 2800-1 was used a tracking crane.

"The fact that we managed to do all this and complete the high-performance transport so smoothly and quickly thrills the whole team,” said Stefan Schmidbauer, managing director of the Schmidbauer Group and project manager for this job. “We are very proud and hope to set an even bigger record soon. Thank you to everyone who helped with this extraordinary project!" 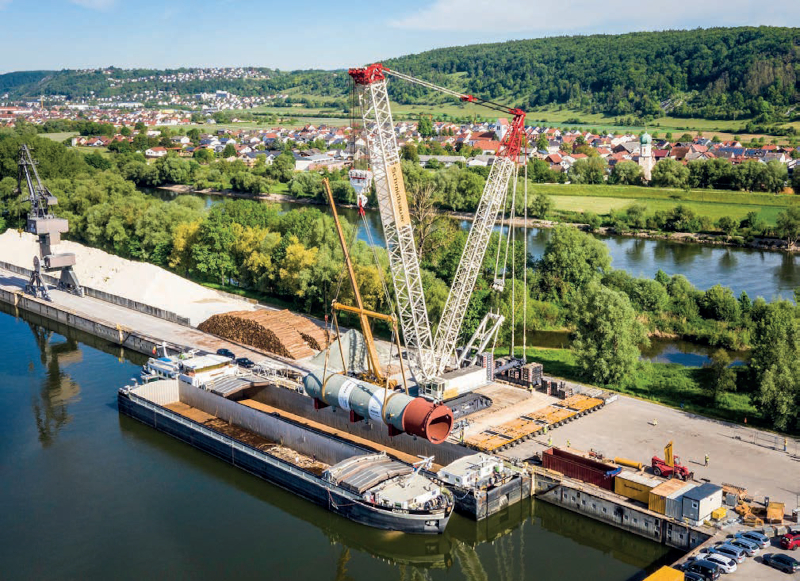 Schmidbauer setting reactors onto SPMT at the port of Kelheim. 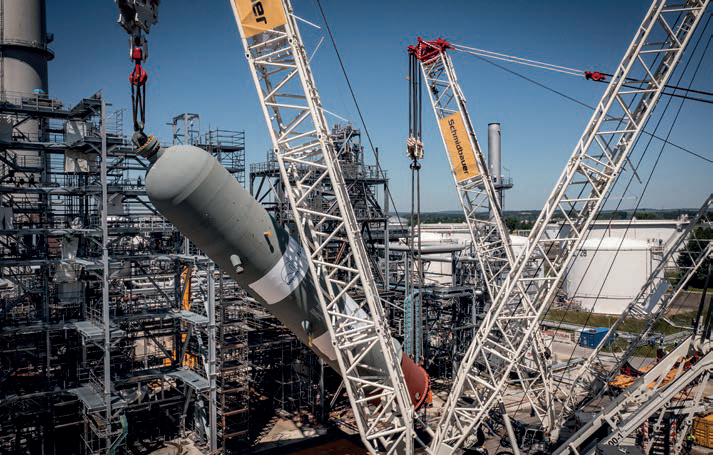 When setting the reactors at their destination, Schmidbauer used its Demag CC 8800-1 to carry out Germany’s heaviest single lift of 700 tonnes at a radius of 26 metres. 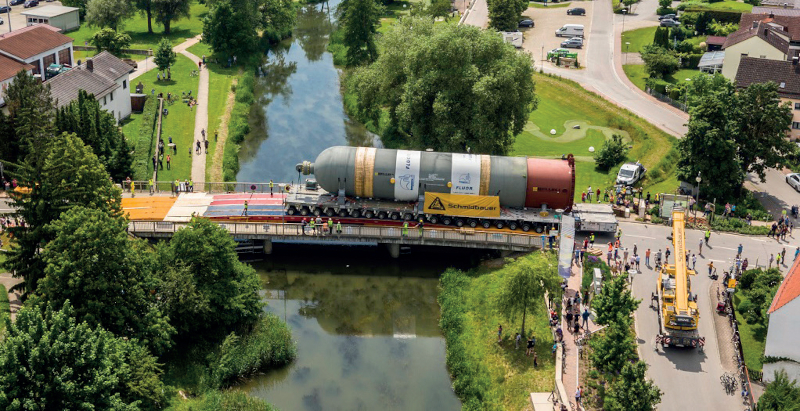 The total on-road weight for each reactor was 880 tonnes. 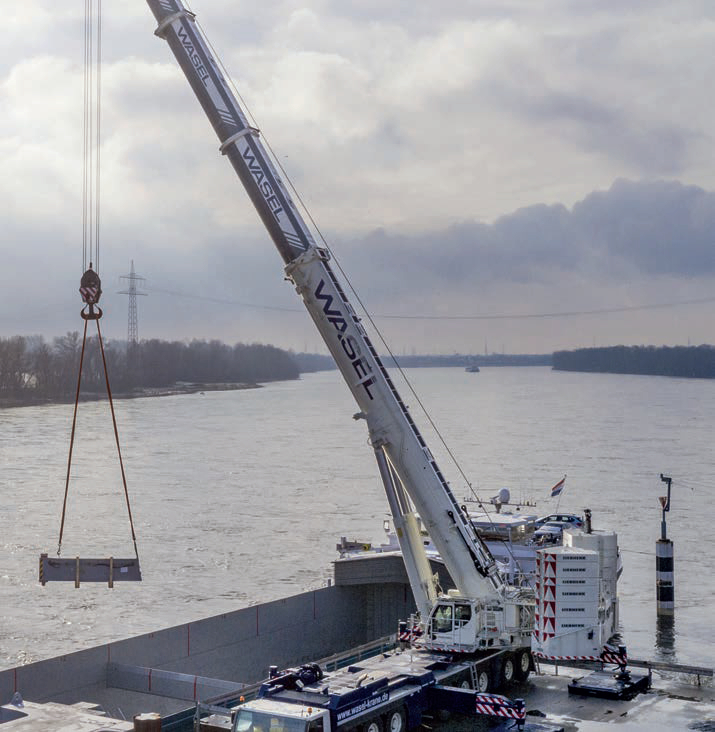