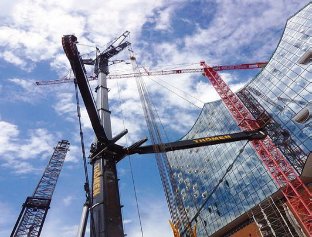 Making Music 28 January, 2016 For the first time since 2007, the Elbe Philharmonic Hall in Hamburg can been viewed unobstructed by lifting equipment. To achieve this, heavy haulage contractor Thömen employed a Liebherr LTM 1750- 9.1 mobile crane in the final part of this construction jigsaw. > read more

Energising for the future 18 September, 2014 What’s under the hood of a crane is always important, but as engine regulation has increased the critical details of the engine become even more crucial. Zak Garner-Purkis looks at one of the most affected markets, all terrain cranes.

One engine or two? 11 February, 2014 With new emissions regulations in many of the world’s most important markets increasing engine size, some manufacturers have dropped the upper engine on their cranes. At the same time, the regulations may pose problems for users working on oil and gas sites and those selling their cranes secondhand to the rest of the world. Will North spoke to three manufacturers about how they are designing all terrain cranes they have accommodated new engines, while retaining lifting capacity and roadability.

Liebherr's heavy hitters 09 July, 2012 Showing its giant LR 13000 crawler in public for the first time at a recent customer day, Liebherr surprised guests with an unexpected new all terrain, its second biggest yet. Cristina Brooks reports

Heavy knuckleboom hits the road 27 July, 2011 The revision of the knuckleboom standard EN12999, launched this year, recognises the increasing use of the cranes for lifting as well as loading, and the risks involved. One manufacturer, Turkey’s World Power, has been developing very heavy knucklebooms mounted on all terrain carriers, targeted at this sector. Kevin Walsh reports.