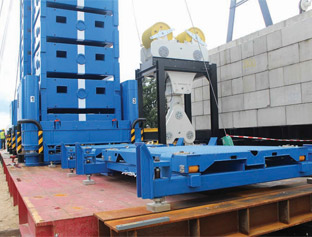 Modular power 10 May, 2016 Jack up systems and strand jacks offer a powerful way to lift huge loads, yet are often easier to deploy than large cranes. Rhian Owen looks at recent projects that demonstrate the flexibility of these systems, and considers their limits and potential. > read more

Fagioli saves Venice from the sea 09 December, 2013 Fagioli has installed a series of gates and caissons designed to protect Venice’s architectural treasures from the Adriatic.

Built for speed 23 February, 2012 Industrial cranes are made to travel a long way fast on a smooth floor, making them popular for maintenance and industrial pick and carry up to 30t. But their potential for construction remains unexplored, says Fabio Vercelli Galizia, president of the crane manufacturer Galizia, in Italy, tells Cristina Brooks.

Make it mini 23 February, 2012 Contractors are sizing up minicranes for saving time and money. Flexible, small fold-up lifters get inside buildings, up lifts, inside crannies, and helicopter to remote places to provide up to 6t of lifting power. Cristina Brooks reports.

Exploring all new terrain 20 October, 2011 As some manufacturers progressively modernise their all terrain product portfolios, filling every niche of the application spectrum from the lower capacities up, the scarcity of upper mid-range cranes is looking inviting to others. Kevin Walsh reports

On the job testing 28 July, 2011 Ansys, a firm in South Africa, is developing a Continuous Rope Monitoring System (CRMS) to increase the rope life on mining hoists by halting them before failures occur.

Building bridges 07 April, 2011 The derrick continues to be an efficient bridge building tool, despite the perception that it is outmoded. The beauty of the derrick’s simple tripod structure is that it is lightweight and easy to operate, but it must compete with larger capacity, heavier, more specialised equipment. Cristina Brooks reports

Power up 10 March, 2011 Power up Power generation, whether it is wind farms or nuclear plants, coal powered stations or transmission lines, seems to be one of the most resilient sectors for lifting. Kevin Walsh assesses how strong it really is

Compact class 25 January, 2011 The minicrane is a niche that is becoming mainstream. In many cases, its ability to get in close to where a load needs to be placed means it can rival bigger cranes. Phil Bishop reports the latest developments