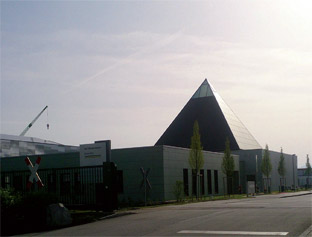 Under the Sennebogen pyramid 26 June, 2014 The German crane manufacturer Sennebogen has over 60 years worth of experience in the industry. Recently, it opened a new training facility in Staubing, Germany. Zak Garner-Purkis went to the launch of the new company’s new centre to hear about Sennebogen’s plans for the future. > read more

Crawling on the shoulders of giants 16 December, 2011 Last month, Stuart Anderson explained how alternative lifting devices built by heavy lift specialists have come to share more and more with crawler cranes. This month, he considers the troubled state of the mainstream crawler industry, the development of crawlers from 100t in 1947 to 3,200t today.

Crane builders rush onto the road to Oz 21 October, 2011 It is hard to think of a significant maker of mobile or crawler cranes not presently active in the Australian market. Viewed from Europe or America, Australia’s economy, stability and prosperity look pretty wonderful. Stuart Anderson reports

More power to you 20 September, 2011 As a boom in big energy projects increases the size of components passing through ports, users must decide between mobile harbour cranes, crawler cranes, and ancillary equipment to suit the lifts. Cristina Brooks considers the options

Built in Austria by robots 27 June, 2011 Liebherr-Werk Nenzing is the home of the Liebherr-MCCtec maritime division, but also handles the lion’s share of crawler crane production for the manufacturer.

Winds of change 16 November, 2010 Supply and demand is an ever-changing landscape in any sector. Kevin Walsh looks at the future for mid-range crawlers.

Nuclear renaissance 24 May, 2010 For many years, safety concerns hampered new nuclear plant construction. In the late 1990s and start of the new millennium, new political priorities came into play. In the second article of a two part special, Will North looks at the lifting challenges posed by new power plant designs, and the giant crawler and special lattice boom cranes that have been built to meet them

Improve your fleet’s leverage 20 May, 2010 The growth of crawler cranes to deal with increasingly larger jobs hasn’t been restricted to bigger superstructures, with attachments also on the rise. David Pittman reports