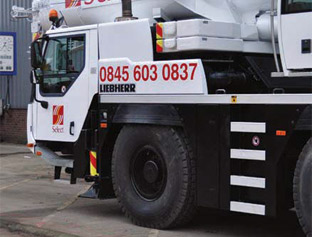 Testing times 20 August, 2018 Mobile cranes drive on public roads, but in the UK they have not been required to have roadworthiness tests. This is changing. Julian Champkin looks at the differing issues for truck mounted cranes, based on a standard lorry chassis, and for other mobile cranes including all-terrain cranes based on a bespoke chassis. > read more

With deadline looming, US faces crane showdown 15 April, 2017 With the expiration date for OSHA’s delayed implementation of its contentious rule on crane operator certification looming and no progress made on an amendment, National Commission for the Certification of Crane Operators (NCCCO) CEO Graham Brent has warned that the industry may face the imposition of a flawed regulation.

Weathering Heights 10 May, 2016 High winds pose a significant threat to all cranes. This month, Rhian Owen considers the risk to tower cranes, finds out how manufacturers design them to minimize risk, and asks what users should do to prepare for high winds. Next month, we look at the risks for crawler cranes.

What to expect when they’re inspecting 21 May, 2012 With a number of high profile accident investigations world-wide involving tower cranes now having come to a close, are we really any closer to ensuring it doesn’t happen again? Kevin Walsh reports

Watch your step 21 May, 2012 The death of a 61-year old man in Washington who hit his head as he tripped from a crane deck led the state’s department of labour and industries recommend the following ways to avoid falls from height.

When the wind blows… 27 February, 2012 In March, ESTA will bring together a group of crane and specialised transport industry experts in the field of wind turbine erection and transport to discuss safety. Kevin Walsh looks at the some of the issues to be covered in just one day.

Are you ready to rescue? 08 September, 2011 If a tower crane operator is taken ill or injured in his cab, his life may depend on a speedy rescue. Generally, it will be up to the contractor to ensure a rescue can be conducted safely. Cristina Brooks reports

Picking the right rope 28 July, 2011 MRE Matron Rope and Wire Rope Engineering, an Israeli firm, has developed a test to show how a specific crane might be fatiguing its rope with the aim of improving rope life.

Planning a successful lifting operation 10 March, 2011 When crane incidents occur, the cause can often be traced back to mistakes made in the planning of the lifting operation. Indeed, rather too frequently, the problem lies in the complete lack of any meaningful planning. Simple, routine lifting operations can be safely carried out without a written plan, provided the personnel involved are properly trained in their respective roles. They will have a mental checklist to automatically run through before they start and will keep it in mind during the operation. However, for a lift of any complexity, a written plan is essential. Derrick Bailes, chief executive of the LEEA, shares his expertise on writing an optimal lifting plan.