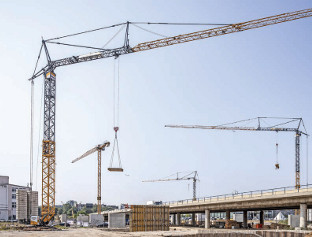 Looking at your self 08 August, 2019 As the market for self-erectors has been buoyant in recent years, manufacturers have invested in enhancing and updating their ranges. Sotiris Kanaris reports. > read more

The Real deal 28 January, 2016 Eight years is a long time in any walk of life. The construction of the Bridge of the 1812 Constitution in Spain is no different and as a result, efficient, effective and reliable crane equipment was essential. A duo of Linden Comansa 21LC400 tower cranes were present throughout the project, which opened to the public in September of last year.

A new luffer, better than the old luffer? 29 December, 2015 New York’s tightly packed and quickly built skyscrapers, busy streets, patchy electricity, and maze of subways combine to make lifting in city uniquely challenging and highly regulated. As the NYC Department of Buildings seeks to restrict the use of older cranes, the diesel luffers that dominate the city’s skyline face new competition. Will North reports.

A 34 storey roof extension 16 November, 2015 A Potain MR 415 crane has been erected on top of an existing building in Chicago to overcome space restrictions in the US city.

Tallest tower 16 November, 2015 Set up on the top of Germany’s tallest peak, the Zugspitze, a Liebherr 150 EC-B flat top will temporarily be the highest object in the country.

High power on a slim tower 16 November, 2015 Level 10 Construction is using a slim but powerful Wolff 700B on hire from Maxim to build one of San Francisco’s tallest buildings, 181 Fremont Street.

Towers on track 27 July, 2015 In the years running up to the global financial crisis, Arcomet’s family owners, the Theyskens, had built up an impressive fleet around the world. However, when the market dropped off, they found themselves struggling with debt. New investors took control of the company, restructured its debt, and brought in Philippe Cohet from Manitowoc, to get the business back on track. Will North spoke to Cohet during Intermat.

Vertical Vienna 30 November, 2011 Liebherr tower cranes advance on two major construction sites within Vienna, Austria, with the construction of the new University of Economics and Business, called “Campus WU”, and the Central Station.

Careful climbing 25 May, 2011 Climbing a tower crane to increase its height relies on meticulous planning, good communication and the skill and dedication of the erection team, if it is to be completed without mishap. The consequences of a collapse are often loss of life, delays to construction programs, criminal prosecutions, loss of reputation and massive costs for all involved. Cristina Brooks reports

On schedule in Sakhalin 24 February, 2011 Aker Solutions is using five Potain tower cranes to help it keep to tight deadlines as it builds a gravity base structure for Exxon Neftegas at Russia’s Sakhalin Island.

Wolffkran heads for Mecca 24 February, 2011 Wolffkran has supplied 44 cranes for the construction of 1,000,000 sq m of accommodation for pilgrims to the Islamic holy city of Mecca, Saudi Arabia.