Nicola Castenetto, business line director for self erecting cranes at Terex, tells Julian Champkin why he is so excited about the potential of the sector.

Nicola Castenetto is Terex’s newly-appointed business line director for self erecting cranes. He has been with the company for 15 years; his new position perhaps reflects a new regard for the type, within Terex and elsewhere: “We are really in a stage of growth with our self erecting cranes,” he says. “They are now a focus of thinking and expansion within the company, so this is obviously a nice place to be.” For an informed view on the self erector, therefore, he is an ideal source.

“We are moving our growth in self erecting cranes in three directions,” he says. “Commercially we are trying to strengthen the relationship with our existing partners and at the same time we are opening new markets, which means a nice opportunity to look at the countries where in the past we have not been so present.” More on that in a moment.

“Linked to that is the second very important thing: we are expanding our output here.” ‘Here’ is Fontafredda in northern Italy, between Venice and the Alps, historically a powerhouse of Italian engineering and Italian crane-making. “We are building a new factory. The work is progressing, it will be coming to reality, and it will be focussing on self erecting cranes. We will be getting the keys at the end of this year so production will begin at the start of 2023. We need this expansion to cope with the increasing demand that we see for our self erecting cranes.”

It is a big investment for Terex, in the multi-million-euro range. It is also a confirmation that the company believes in the product and is campaigning to grow it.

“And the third direction is growth in our range of the product. We are developing a new range, called the CSE.” The current CSE range has jib lengths of between 30 and 40 metres and capacities up to 4.4 tonnes (though a larger one is coming – again see later.) What is different about the CSE? “It is basically moving from electro-mechanical cranes to electrical cranes,” says Castenello. “One customer described it as like moving from a traditional phone to a smartphone, and I love the analogy. It describes it well: it is in fact a new technology. It will, of course, fit in with the new EU machinery regulations, which are coming into force at the end of this year but at the same time it is also bringing a lot of extra value features for our customers.”

Self-erecting cranes come in many different shapes. Some, like Terex’s CSE and other models, have telescopic masts; others, including offerings from Saez and Potain unfold themselves in the middle. Is this because they are a fairly new form of crane yet to evolve to a standardised best-adapted design?

“I don’t think you can properly call them new,” continues Castenello. “Terex has been producing thousands of self erecting cranes ever since we acquired the Gru Comedil company, which made them close by in Milan, and that was 20 years ago. I believe the different geometries cope with different requirements in the job site. What all self erectors have in common is that they can be taken anywhere, and can get there simply and easily. I remember a wonderful project in Cambodia where we had to take one through the forest to reach a very ancient temple that need to be restored. That was a special place. But in Europe, if I drive from here to central Germany, just along the motorway I might count 200 self-erecting cranes. So they are a big sector. And they are shaping the infrastructure, and especially the residential areas, of our cities, of our towns, of our villages up in the mountains in places where it's very difficult for any other crane to go.

“When I just look out of my office window I can see three of them at work; they are building a warehouse and some houses. And building houses is one thing they are really good at. They have the height and the reach, and the capacity, to cover almost any residential building up to say four storeys high, and to do it from a single point so they need not be moved around. If you think of their geometry – a vertical tower with a horizontal beam at the top – that is the right shape for a house and sets it apart from other products: it is a much more convenient, and closer, fit than the oblique angle boom-from- ground-level geometry of an all-terrain mobile crane or a lattice crawler.

“But they are not limited to residential projects or warehouses. You seem them also on bridges, on motorway jobs, on different infrastructure applications

“So they are eating into the market of most other types of cranes: all-terrains, other mobiles, crawlers and, of course, tower cranes. They are quick to erect, as well as needing no assist crane; and they are much cheaper than a standard tower crane, by perhaps an order of magnitude: a small construction company can easily afford to buy one and can tow it to the job site behind a standard builder’s truck. They need no ground preparation in the way of pouring concrete and waiting for it to set.

“That last point is another plus when you are talking of renovations of existing properties: they do not damage the landscape or garden around it. A homeowner having an extension built does not want all of his garden dug up!

“You can add also that they are electric-powered, and simple to operate. You can plug some of our models into a single-phase mains electricity. Here in Europe building your own home yourself is a romantic, perhaps even a passionate, dream that many people have; and self erectors are the ideal crane for self-constructors. It is not exaggerating too much to say that you can unplug your microwave oven and plug your self erecting crane into the socket! And that’s one of the things I like about self erectors: you might not be seeing them building big prestige projects, on dams or on the Shard in London, but you could call them a democratic crane. They do help people’s dreams come true...

“So I really think there is a potential for the self-erecting crane even to gain more space in the market compared to some other mobile cranes.

“Self erecting cranes have been very widespread in Europe for a long time. In Germany you buy a self-erecting crane like you buy bread. It is much the same in Belgium, France, Austria, and also when we come to Italy. They are in Scandinavia; in the UK, there are some but not too many: they are still a bit of a novelty but are now gaining acceptance. But the big new market for them is North America. They are even more of a novelty there, but they are gradually gaining a bit of space.

“I see that coming as a big potential market, and it is something that Terex is working on as a company. We have a few already in place there but obviously we want to enlarge our presence. We are developing the product, we are studying distribution channels. It is an area we are focussing on and pushing hard, and I don’t think we are alone in that.

“I mentioned our CSE range earlier. In that range we are working on a model with a 47 metre jib and that is one crane that we think will be ideally fitting the requirements in North America. Longer reaches, higher lifts, greater lifting capacities – those are what is wanted and what we can give them.

“Of course, the trend towards size is happening everywhere, not only in the US. Our maximum capacity self erector at the moment is 4.4 tonnes, but the 47m jib version will be able to lift in the 6 tonne range.

“We are seeing a big positive trend in demand for self erectors. Terex recognised it three or four years ago and decided to move in that direction. In the past self erectors may have been seen, not just by us but by many, as a sideline, a sort of compliment to big, ‘proper,’ cranes; that has changed. So we now have an organisation in place here in Fontafredda dedicated to them, and a big engineering team to go with it, and that is also why we are bringing the new factory on stream. Generally the self erector seems to be the crane that that is expanding more than any other type of crane, and it has still got plenty of the market share to take from tower cranes and from mobiles. The overall market for them also is growing, in a positive way, and here at Terex we are also hoping to increase our share of it.” 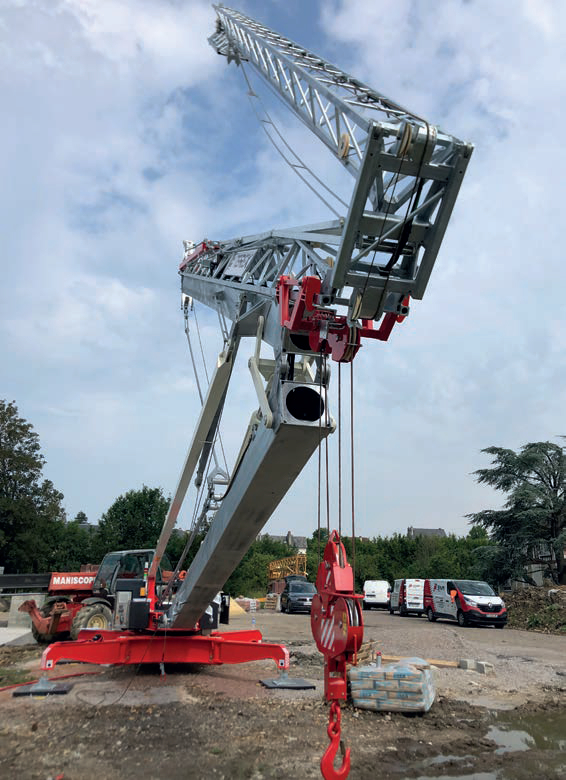 Terex is developing a CSE line for the North American market