Fossil-sourced diesel is no longer welcome at the party. It is noisy and polluting, and diesel-powered lifting is increasingly being banned from city centres. Julian Champkin finds that batteries may be the power of the future – and indeed of the present. It is here already...

The future is here, and it is electric. Not only that, it is battery. Small cranes, minis and spiders have been electric-powered – by cable or battery – for years now; they are silent, they are emissions-free, they don’t pump out noxious fumes or emit headache-inducing decibels so they can work indoors in enclosed spaces and close to the public - in a shopping mall, for example, even while it is being used by the public; why would anyone use internal combustion for such tasks? Think big cranes, though, lattice crawlers and the like, and you think diesel. It is time to change that way of thinking.

Back in 2020 Liebherr brought out their LR 1200.1 all-electric 220-tonne lattice crawler, which they called ‘unplugged.’ It could work by battery or while cable-connected to the mains. In March this year it annonced the LR R 1160.1 ‘unplugged’. Now they are no longer alone. Netherlands-based PV-E Crane B.V. have a range of lattice crawlers, which comes in versions of up to 160 tonnes capacity; and - which would seem to be a first - telecrawlers, which range up to 120 tonnes. They are all-electric, not hybrid; and their power is from batteries, not cable-from-grid.

Orlando de Jonge is their sales manager. “We started the company about three years ago; we worked with a transmissions supplier who already had 20 years’ experience in electric vehicles in the automotive and excavator industry, so they already had a proven track record but they had never done anything as big as this. It is the first crane of this capacity that is entirely battery-powered.

“We delivered our first model to a Dutch contractor who uses it for pre-cast building. Power is from two Lithium-ion batteries; the first ones were each of 130 KWh, but the suppliers have improved them so they now give 195KWh from the same size pack. We thought they would give eight hours of working on a charge, but we have found that they deliver more than that.”

The batteries deliver 650 volts, are guaranteed for three years or 1000 charge-cycles; charging at 44kWh for six hours from a typical 63amp supply will fully recharge them from empty to full. But recharging might not in future be the responsibility of the crane user.

“What is different about our crane is that it has a two-battery set-up” says de Jonge, “and that, unlike on the Liebherr, the batteries are removable. You can run the crane on both batteries for maximum power; or on one battery while you charge the other from the on-board charger; or if you run out of charge you can take the batteries out and replace them with fully-charged ones.

“That is the unique selling point of our cranes, and that I think is the step-changing transformation and the way that the future of electric lifting will go. All the equipment on a site will have rechargeable batteries, and they will be modular and interchangeable between machines. Crane operators will not want the extra complication of owning or maintaining the batteries, or ensuring that they are the latest, most efficient model, so battery rental companies will emerge that come to the site, slot in a fresh set of charged batteries whenever required, and take away the flat ones for re-charging. Probably the rental companies rather than the crane operators will actually own the batteries; for the operators it will be pay-as-you-go. That will save them a lot in capital investment, because batteries are expensive. It will be cheaper if they buy the crane without batteries which they rent as required.

“No single contractor can do this alone. It needs an infrastructure, and it needs an industry-wide mindset. Developers, manufacturers, contractors all have to be on board. Big hire companies will probably do it first, and then smaller ones will be able to follow. And that is happening now: already Select Plant Hire, one of the biggest in the UK, is using electric crawler cranes and driving that process.

“Today, buying our all-electric crawler costs about the same as buying a top-end diesel model of the same capacity; and the running costs are very much cheaper.”

Battery technology is advancing all the time. Lithium-ion is the current flavour of the month; but there is still plenty of life in the traditional lead-acid battery or variants upon it.

Most crane operators are well skilled in looking after a diesel engine; but when they swap to electric there are new skills to learn.

“The whole market is moving to electrification,” says Jacques Valckenaere of Belgium-based GemOne. “But what people forget is that the market is old-fashioned and diesel-thinking and is not nearly so mentally aware of how to look after batteries. So we offer sensors and software that constantly monitors the way the battery is working. Using just five parameters we have algorithms that predict the lifetime of your battery and tell you how to extend it. For a traditional lead-acid battery of course the acid level and the voltage and amperage matter; and temperature in the battery is very important - it will rise when you are charging the battery, and also when you are using it. If you use your battery immediately after a long charging you will damage it: it sounds incredible but a fully-charged battery should be rested a while before being used. So you need to monitor also the hours it has been charging and discharging.

“Most people know not to let lead-acid batteries discharge to a level less than 10% of their maximum charge, but you should not charge it to more than around 80% either. And battery life is limited by the number of charging cycles; on a lead-acid battery a small charge session, from say 50% to 60% has the same effect on battery life as a long charge from 10% to 80%; so you should do fewer, longer charges rather than many shorter ones.” (Lithium ion batteries are not subject to this.) “Our sensors and algorithm can process all this data and send it wirelessly to a screen on the crane or in the office.”

Dan Hunt is executive sales manager for Shield Batteries: their batteries power, among other things, the booms of tower cranes. “Lead-acid batteries of course are heavy; but that is actually an advantage in cranes because you can use it as counterweight; why carry lumps of concrete around when you can carry your power source instead? Lithium-ion at present costs around five times as much as a similar-capacity lead acid battery; so many people are content for now to stick to lead-acid.” And the technology has improved: these are not the acid-leaking things that start your car (or go flat on cold mornings and refuse to start it.) “These are AGM batteries, standing for Absorbed Glass Mat: the plates are separated by a glassfibre material that holds the sulphuric acid like a sponge, so there is no liquid sloshing around; they will not leak and you can lay these batteries on their sides and they will carry on working. Good maintenance will prolong their life: we have batteries that are six, seven or eight years old and that are still working well.”

If you still believe that batteries are low-power and go flat quickly, listen to Dan Ezzatvar, marketing and special products director for lifting specialists GGR. “We’ve been selling, renting and operating electric mini-cranes for twenty years, and our feed-back to the manufacturers has helped shaped their design. The three questions that every customer asks me are ‘ how long does the battery last?’; ‘how fast is it to charge?’; and ‘What is the power consumption and output?’ The fact is that we have battery technology that now enables those machines to work for ten hours continuously – and that is continuously, without stops for operators’ coffee-breaks. We have fast charging systems from three-phase supplies; and technology is delivering more power from batteries of the same physical size. So we have new batteries, from Faresin Industries S.p.a, that deliver 330Ah – which is 10% up from the previous model’s 300ah; 440Ah – again 10% up from the previous 400ah; and the massive 560Ah battery with run times of up to 20 hours, charge times of under four hours and 44.8 kw/h consumption. And they are powering our F6.26 telehandler which can lift 2.6 tonnes at a reach of 6 metres. Customers wanting to move away from diesel imagine that batteries can power small, low-capacity machines only, and that bigger lifts will need hydrogen or some other alternative power. But they are wrong: the cut-off transition point is a lot higher than they think. Battery-power for larger lifts is a mature technology. It is here on the market today.” 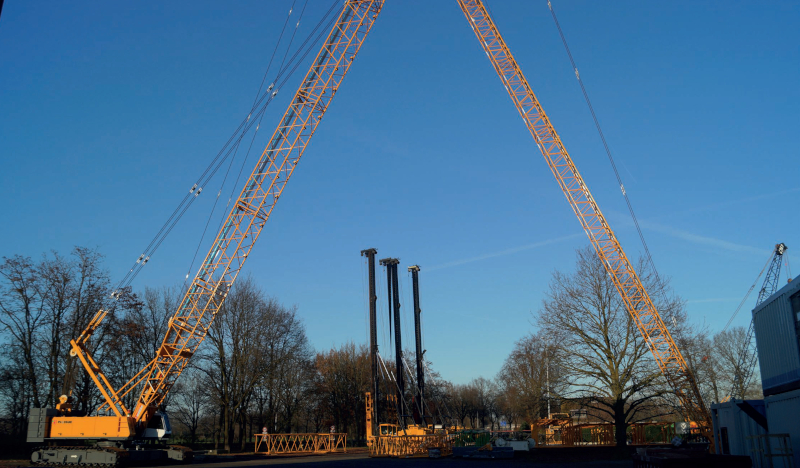 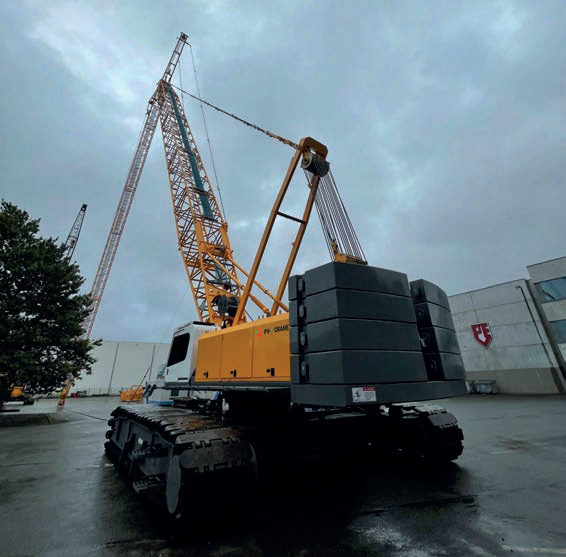