When a helicopter crashed into a tower crane in Central London, crane owners Brookfield Multiplex confounded pessimists by arranging the supply of one of the country's biggest mobile cranes from hirers Ainscough. Will North reports

It's rare that arriving late to operate a crane on a busy city centre job site is a good way to start your day: for Richard Moule and Nicki Biagoni it was probably one of the luckiest mornings of their lives. As they prepared to climb up to their Terex CTL-180 working on the St George Wharf tower that foggy morning, a helicopter crashed into the crane, ripping the end of the jib off and plummeting to the ground below.

While Moule and Biagoni escaped with their lives, experienced pilot Pete Barnes and pedestrian Matthew Wood were both killed, and 13 others were injured as the burning aircraft and parts of the crane were scattered over the busy transport interchange around Vauxhall bus station.

Beyond the loss of life and injuries caused by the helicopter crash, the accident posed a serious challenge to crane owner Brookfield Multiplex (BM). With the jib effectively destroyed, the climbing cage potentially out of commission, and limited space for set up of a mobile crane, how would they get back to work on the 180m building?

The accident brought part of the out-ofservice crane's jib to the ground, snapping the luffing cables, and leaving the remaining jib sections hanging just by their attachment to the pivot point.

The normal method for dismantling a crane of this height would be to climb the crane down, using the climbing cage, and then use a mobile crane to completely dismantle it once it is low enough to reach. Normally the jib would be used to lower mast sections as they are removed from the climbing cage.

With the jib destroyed, it looked like BM needed to come up with a specially built lifting apparatus, perhaps a hoist on the crane's machinery deck, or a derrick mounted on the tower. If the climbing cage had been badly damaged, it would not be able to climb the cage down. That would add even more complexity to what would, already, be a difficult job requiring considerable engineering expertise.

With the help of Britain's biggest mobile crane hire firm, Ainscough, BM were able to get their hands on a 600t Terex TC 2800-1 lattice boom truck crane.

The giant crane drove down from Leyland in Lancashire, with the carrier and support vehicles driving in a police convoy from Heston Services to the central London job site. By Saturday morning, just a couple of days after the accident, loose material had been collected from the surrounding streets and large components hanging from the crane secured in place. At the time of writing, on Wednesday 23 January, with work delayed by snow, the A-frame had been removed and the crane was on track to be removed by the following weekend. 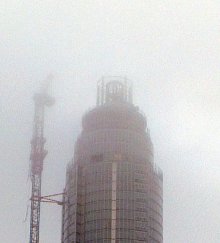 The foggy conditions on the morning of the crash;

Part of the extensive emergency services response to the accident 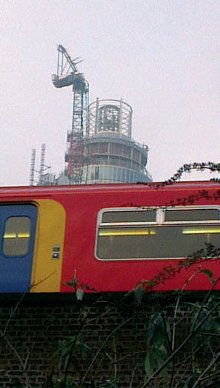 Setting up the Terex TC 2800-1 to remove the damaged crane. 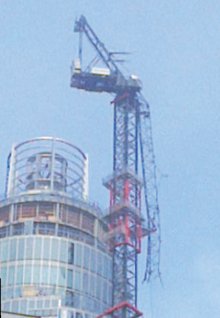 The damage to the jib