Wind power work continues to be a key driver of demand for special transport equipment and services; this is bolstered by more traditional power generation and other industries. Cranes Today reports.

With the wind industry booming (see our features in January and July, 2022) demand for specialist equipment to transport wind turbine components has skyrocketed. And this is forecast to increase. According to research from the International Renewable Energy Agency, to attain the 8,000 TWh required in 2030 under the Net Zero Emissions by 2050 climate change scenario renewable energy generation must increase by an average 18% each year from now until 2030. For this to happen it will be necessary to add 310 GW of capacity in onshore wind each year. So the stage is set for special transport users and manufacturers alike to develop their wind-related special transport portfolios…

According to Mammoet, this additional flexibility means that fewer modifications are necessary to verges, street furniture or bridges during onshore wind transport projects. It also allows new, larger designs of wind turbine generator to reach remote wind farm sites (where winds are strongest and most reliable) more efficiently.

As developers seek to make the most of wind farm locations, turbines have grown taller to reach stronger, uninterrupted winds. Consequently, the base tower sections of these turbines have widened, from around 4.5 metres just a few years ago to over six metres today. As a result, Mammoet says their centre of gravity during transport has risen higher from the ground; as much as 1.5m above earlier models. Beyond 4.5m, conventional trailers are considered not stable enough to perform transport of the largest tower models safely, the company says.

For these larger tower sections, the only alternative has been to transport them on top of a trailer with hydraulic suspension. However, this combination needs crane loading and unloading, is far less manoeuvrable, and has a ride height 1.2 higher than a clamp solution – which is within striking distance of bridges.

The new system Mammoet has bought is built by German special transport manufacturer Greiner. It is installed on turntables between a mixture of an air suspension jeep-dolly and conventional multiaxle hydraulic trailers in the rear forming a modular vehicle capable of completing narrow sequences of turns without leaving the road surface.

Another company that has expanded its wind fleet is UK transportation specialist Collett & Sons which acquired the entire wind energy fleet of Bristol-based Plant Speed at the start of this year. This added Nooteboom super wing carriers, quadruple extendable blade trailers and lift adapters, alongside several specialist adapters including gyrostat tables, loading beds and tower hooks to Collett’s fleet.

The transportation of wind farm components, however, does not always mean turbines and blades; other heavy items more traditionally associated with the power industry, such as reactors and transformers, also require transportation as part of the infrastructure of windfarms. Collett is active in this area, too.

Another element of wind (and solar) farms that requires special transportation is the cabling. Getting the electricity generated from photovoltaic or wind turbines to where it’s needed requires very long cables.

With a team of over 100 specialists, German company Energieanlagen Ramonat plans, installs, maintains and disposes cable routes all over the world. Depending on the cable design and length, which can be up to two kilometres, the weights of the cable drums range from 55 tonnes at present to around 100 tonnes in the future.

In addition to the high load weight, the voluminous drum dimensions also need to be taken into account – both during transport to the construction site and during subsequent manoeuvring on different construction site topographies, during uncoiling for example.

“If the width of the cable reels is still moving between 4 m and 5 m today, soon it will be between 8 m and 12 m,” says Energieanlagen Ramonat managing director Stefan Ramonat. To transport these kinds of loads quickly and safely Energieanlagen Ramonat mainly uses Goldhofer THP/SL-L heavy-duty modules with vessel bridges. Goldhofer says they offer an optimal dead weight-to-payload ratio and numerous combinations, plus high torsional stiffness and good off-road capability. In addition, the use of self-propelled units (»ADDRIVE«) is possible, increasing operational flexibility at lower investment costs.

To cope with the increasingly high-volume cable loads of the future, Goldhofer is currently developing an optimised vessel bridge to accommodate an unwinding device for drums weighing up to 100 t. Parallel to this, concepts are being developed for motors with synchronised drives for jerk-free cable unwinding at the installation site.

“The combination of the THP/ SL-L modules with the vessel bridges, which are only 450, 500 or 650 mm high and up to 13 m long, is the optimum heavy transport solution for our cable drums,” says Ramonat. “It is flexible to use, highly available, and has already saved us many timeconsuming detours.”

Flexibility is also cited as a key attribute of Goldhofer’s new Highway Trailer P12 Plus which is being used by USA-based heavy haul trucking and crane service provider Hall Trucking. Hall Trucking was one of the very first companies to buy the P12 Plus trailer, in 2021, and has been using it in the Mohave Desert, California, to transport a variety of loads including crawler crane superstructures, mobile cranes, and nacelles for the Sky River Wind Project.

Available with one or two intermediate bogies, the semitrailer is capable of being combined up to 12 axle lines and offers a longer loading deck and a flexible payload. It is designed for flexible configurations to handle a wide range of loads. It is a flexible trailer design that combines a semi-trailer, trailer and steerable dolly for long load combinations in one solution, claims Goldhofer. As a result, oversized loads of all types, construction components, vehicles and equipment can be transported more economical than before, it says. “The P12 PLUS was the optimal purchase we could make,” adds Jeff Hall, owner of Hall Trucking. “With this trailer we are extremely flexible and can cover all transport tasks in the energy industry.”

At the forthcoming Bauma 2022 trade show in Munich, Germany, the TII Group, will outline its belief on the importance of special transport to the energy transition. A speech from scientist Prof. Franz-Josef Radermacher at the company’s stand will show how the TII Group’s special transport vehicles for the energy industry are contributing to the success of the necessary energy transition.

As part of this TII will be displaying products for the wind industry from its Scheuerle brand. This will include the K25 L modular platform trailer and the WT70 wind tower adapter.

The K25 L was designed specifically for the wind industry to handle oversized loads that generate high point loads and, at the same time, have a high load centre of gravity.

The wind tower adapter actually comprises two WT70s – for a front and rear bogie combination. Depending on payload requirements, the axle lines of the front and rear bogies can be combined in such a way that the payload-length ratio of the transport is ideally realised. As a result, TII Scheuerle says it has opened up the payload segment to accommodate up to 140 tonnes.

Scheuerle wind equipment has been used by German crane rental and heavy transport specialist Steil Kranarbeiten to transport rotor blades, measuring up to 79 metres, 6km from a loading area to the Flöthe wind farm in Germany. To do this Steil used its G4 rotor blade adapter from TII Scheuerle, plus an InterCombi self-propelled vehicle combination consisting of two sets of six axle lines.

There were multiple obstacles along the route including narrow streets, overhanging trees, low hanging high voltage lines, and a number of sharp bends. “The rotor blade adapter G4 made a significant contribution to accomplishing the task," reports engineer Sebastian Sehl, company secretary at Steil Kranarbeiten and responsible for project management.

The high load moment and the high setup angle of the system were important as the G4 enabled Steil to swing the load over houses and other obstacles such as road dividers and to drive through the limited clearance profiles of the avenues. “We had to erect the rotor blade, which weighs more than 20 tonnes, by up to 45 degrees in order to shorten the transport," explains Sehl. According to Sehl, this angle required a load moment of 650 metre tonnes. “A high set-up angle is required in avenues and wooded areas. As a result, fewer branch cuts and tree-fellings were necessary,” he says.

In Vienna, Austria, lifting and logistics specialist Prangl has extended its capabilities to move wind turbine rotor blades of up to 70 metres in length with the purchase of three new WingMax flatbeds from trailer manufacturer Faymonville.

According to Faymonville, the trailers simplify the handling of long wind turbine blades due to their large gooseneck stroke, a long loading platform with four-fold extension, and strong 19.5-inch pendle-axles.

A slidable load support for the blade tipping frame enables the flatbed to be shortened even under load. “This refinement is a genuine help in passing through winding road sections with more ease,” says Faymonville sales representative Mario Balter.

Faymonville adds it has cooperated closely with Prangl for a number of years regarding vehicle technology for special and heavy duty transport. Prangl is a full-range supplier when it comes to wind power assignments covering everything from the transport of system components to the assembly of the wind turbines.

Since 2019, for example, it has completed the transportation and installation of 45 HRSG modules, three HP drums, three IP drums and three LP drums for a powerplant in Hamriyah, over three phases, on the northern perimeter of the UAE. For the transportation of these components, Al Faris used PST/SL-E multi axle hydraulic trailers, from Goldhofer, with 270 customised stools, which were fabricated in-house for storing the modules on-site. All surveys, planning, technical support documentation, execution plans and schedules were prepared in-house prior to job execution, said Al Faris. This, it said, helped organise all activities smoothly with minimum delays.

Traditional industry also remains an important source of work for Italian lift and move specialist Fagioli, illustrated by the company’s multiple award wins at the 2022 ESTA awards which took place in the Netherlands on March 17. These included: Transport Job of the Year, under 120 tonnes gross weight for moving a 29 tonne transformer from its factory in Northern Italy to a power station in the mountains; Innovation - End User for the transport, tilt-up erection and installation of a 458 tonne reactor vessel in Italy using a 600 tonne crawler crane, 36 lines of SPMT, a skidding system, plus tailing and support frames; and Transport Job of the Year, over 120 tonnes gross weight category, where Fagioli delivery a 334-tonne gas turbine from Genoa to Turbigo power station in Italy, using a heavy lift ship as road transport was not feasible.

So we can see it’s not that traditional power generation and other industries are using less special transport, rather the renewable energy sector is providing particularly fruitful for transport providers and, in turn, manufacturers. It will be interesting to see much of the equipment mentioned at the forthcoming Bauma tradeshow where sustainability will likely be a key motivator for both buyers and sellers. 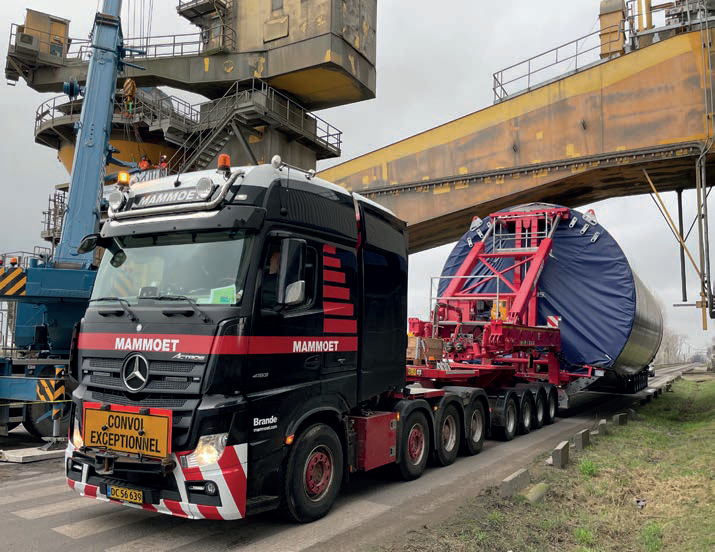 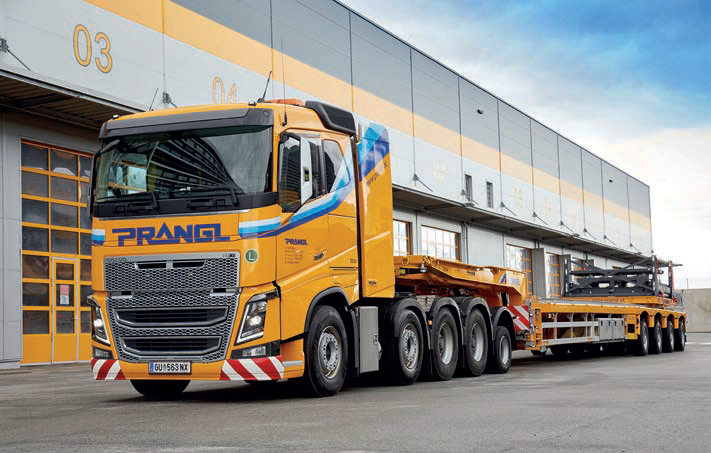 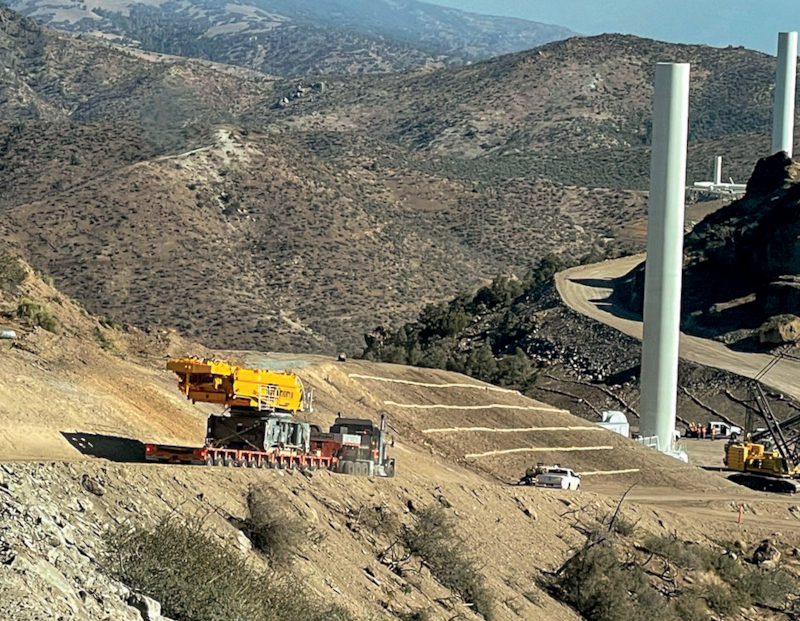 Hall Trucking is using its Goldhofer P12 Plus trailer for the Sky River Wind Project in the Mohave Desert, California