Europe Project round up

This month we review projects from Guernsey, France, Sweden and Germany.

Alderney, Guernsey
A Sennebogen 680 HMC mobile harbour crane is working as the only harbour crane in the British Channel Island of Alderney. Since mid-2013 the crane has been working at Braye harbour in St. Anne to ensure the island's population are supplied with consumer goods, which are delivered in containers.

The machine, which has a 26m reach, is used to load and unload incoming ships and for other lifting tasks on the entire harbour facility, such as lowering smaller boats into the water. Sennebogen say that this is made possible by the cranes mobile undercarriage with allwheel drive.

The harbour and island administration decided to purchase the 680 HMC in 2012 due to an increased flow of goods and greater use of containers. The decision was a significant one as the cost amounted to approximately 40% of the state's annual budget. In the summer of 2013, Sennebogen's sales and service partner, E. H. Hassells & Sons, officially transferred the machine.

For harbour use the crane received a special paint coating designed to withstand the harshest weather.

Paris, France
Liebherr has supplied two 380 EC-B 16 Litronic flat-top cranes and one 280 EC-H 12 Litronic for development works on the Canopée des Halles redevelopment project in Paris 1st arrondisement. The site, at the centre of Paris's daily life, includes an underground shopping mall, Europe's busiest underground station with 750,000 passengers every day, various cultural and leisure facilities, as well as a pedestrianised area, with 300,000 pedestrians every day. The entire structure of the site is being developed, with a new three storey high, 100m wide glass canopy, and five basement levels reaching 22m down.

Space around the city centre site is at a premium, making tower crane assembly difficult. The assembly weight of the EC-B header can be reduced by using the easily divided modules. This allows for the use of small mobile cranes for assembly and saves costs during assembly and disassembly. Quick-action connections are used to assemble these cranes quickly and safely.

Both 380 EC-B 16 Litronic flat-top cranes are being used for concrete work and the assembly of structural steel works. One of the two cranes was assembled on the roof of the underground line. In order to distribute the forces on a large scale, a special steel construction was assembled under the new 6m x 6m cross base.

Uddevalla, Sweden
Uddevalla Special Transporter AB purchased a VarioMax trailer from Faymonville, especially for transports in the wind power sector, such as generators and especially tower elements. The company had landed a lucrative contract in wind power, which demanded an increased transport capacity for the coming years.

The vehicle will be used primarily to transport tower elements (up to a length of 27m), but it can also be used multifunctionally. The carriers can be used not only as a low-loader, but also, with a simple conversion in the middle, as an excavator platform. Uddevalla Special Transporter also purchased special carriers for transporting transformers.

A WT 200 e.tronic with 110 m height under hook was erected first. The crane was connected to the building at the beginning of the works. During the deconstruction it will be climbed down to a height of only 79m.

Only very limited space was available. The solution was to use a cross frame element with an assembly and supporting surface of 10x10 m. The height of the tower could be reached by using the flexible Wilbert tower system with its variable tower elements. The capacity of the WT 200 e.tronic is 8t maximum load and 5.6t at 40m radius.

With the help of a skid loader, the upper inward looking floors were pulled down; the tower crane lowered around 150t of scree material per day for truck removal.

There was no space to assemble the second crane, also a WT 200 e.tronic, until the former foyer was demolished. This was erected on a cross frame element, with a freestanding height under hook of 94m. 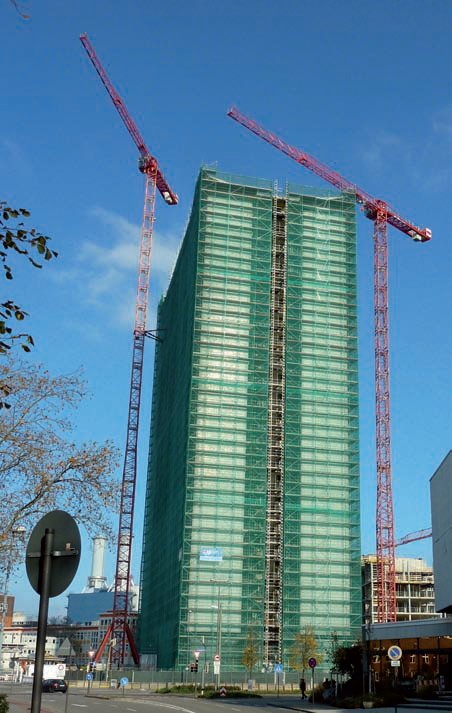 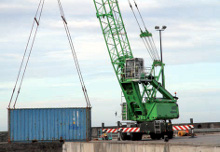 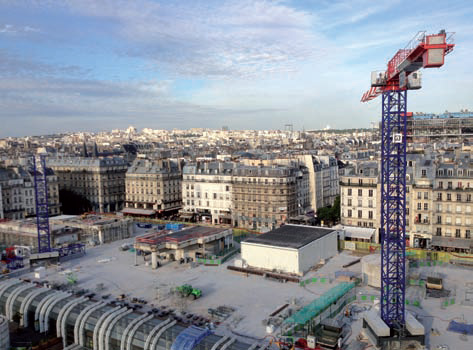 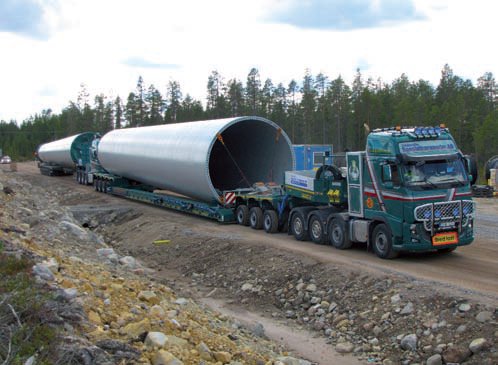 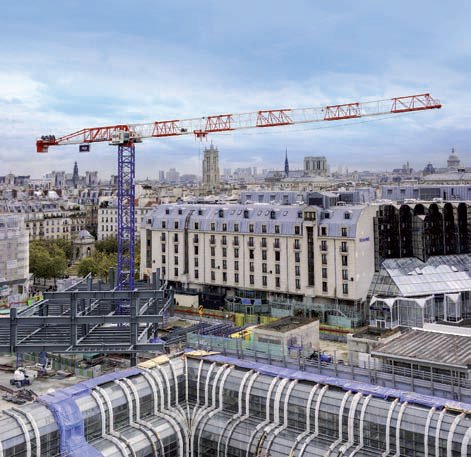