71 gravity based structures for a windfarm, each weighing almost 5000 tonnes, are being lifted, moved and loaded-out by Sarens in a port in France.

Sarens was commissioned by the consortium BSB (Bouygues Travaux Publics, Saipem and Boskalis) to work in the port of Le Havre, France, on the lifting, onshore transport, and load-out operations of 71 gravity based structures (GBS). The structures will be used as foundations for wind power turbines on the Fécamp offshore wind farm.

Sarens’s scope of work incorporated lifting, transporting and loading-out the 71 GBS onto transportation barges. The GBS weigh approximately 4,800 tonnes each.

From their manufacturing site in Le Havre they will be transported to the windfarm located approximately between 13 and 22 km off the Normandy coast. Once complete the windfarm will generate enough energy to provide sustainable electricity for more than 770,000 inhabitants.

Each GBS has a diameter of 31 metres at the base and a height of between 48 and 54 metres. To lift each GBS a gantry system was specifically created. It comprised two different units which moved around the site on SPMT axle lines.

After being positioned around each GBS, the load is secured by four lugs, and the two parts of the gantry system are interconnected by data cables so that they can operate as one. After lifting the GBS, it is positioned on 180 axle lines of SPMT for transport to the cargo barges at the quayside.

To ensure the success of the operation, Sarens has installed on each of the three Cargo barges a sounding system capable of measuring the amount of water in the ballast tank, and a series of interconnected pumps for de-ballasting to be used during loading operations. It took more than 120 trucks and nearly three months of transport to the port of Le Havre for the Sarens technical team to have all the equipment necessary to carry out the entire operation.

To ensure that the marine spread used for the installation offshore of the GBSs does not suffer downtime Sarens is using a 24-hour loading process for the barges. Three foundation bases are loaded on each barge, in a continuous operation of maximum 38 hours per barge. This process must be repeated 24 times, which will require the participation of a large number of highly specialized personnel, not only for the loading manoeuvre itself, but also for all the operations related to the handling of the winches, the preparation of the gantry system in each operation or the reconfiguration of the SPMTs prior to the arrival and loading of each barge.

Sarens says it has extensive international experience in the assembly and maintenance of wind farms. It is participating in installations in France such as Saint Nazaire, Provence Grand Large or more recently, in the lifting and transport work for the foundation bases of the new offshore wind farm in Saint Brieuc, off the Brittany coast, where it has been able to transport loads of more than 1,150 tonnes. 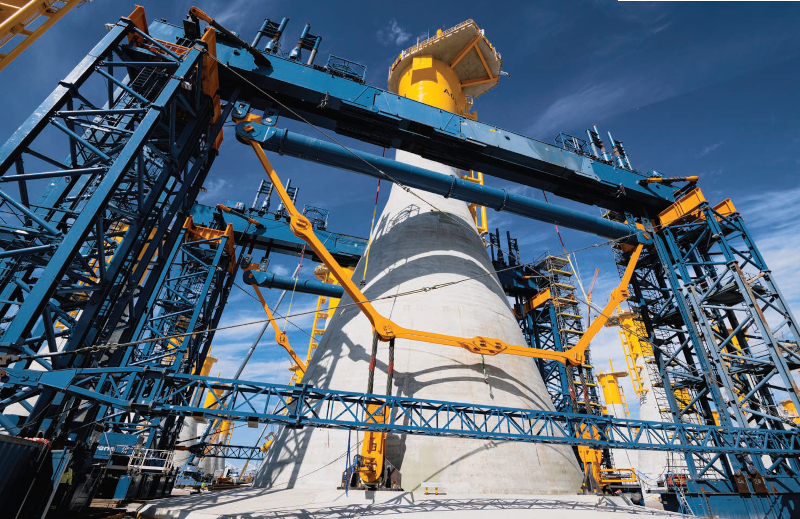 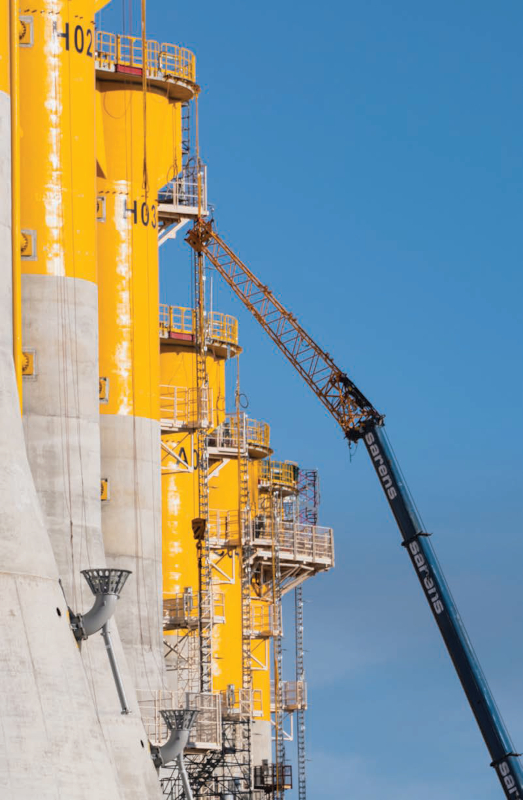 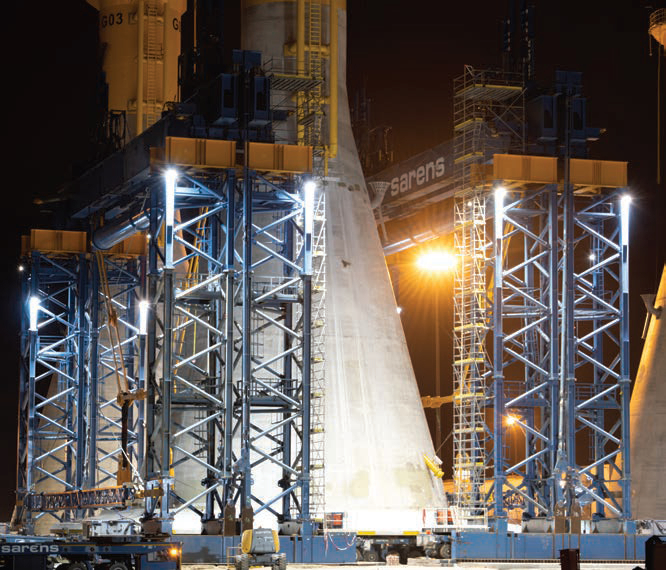 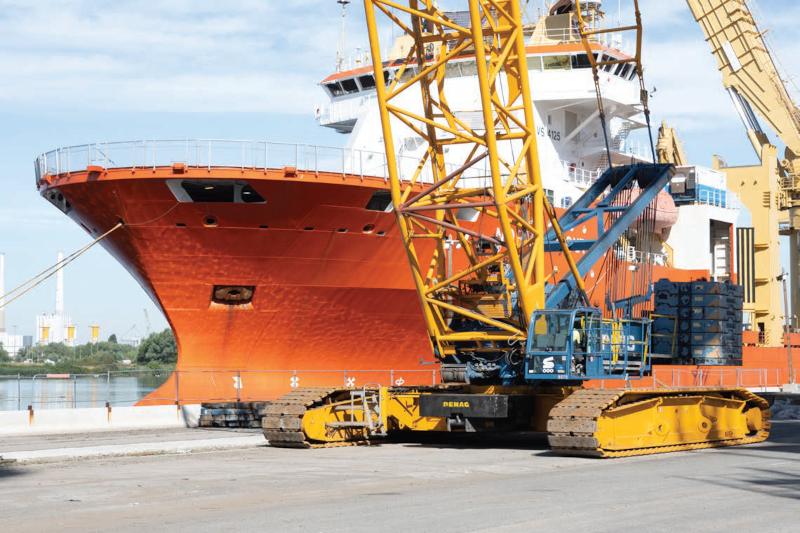 One of Sarens' Demag CC2500 crawlers on duty 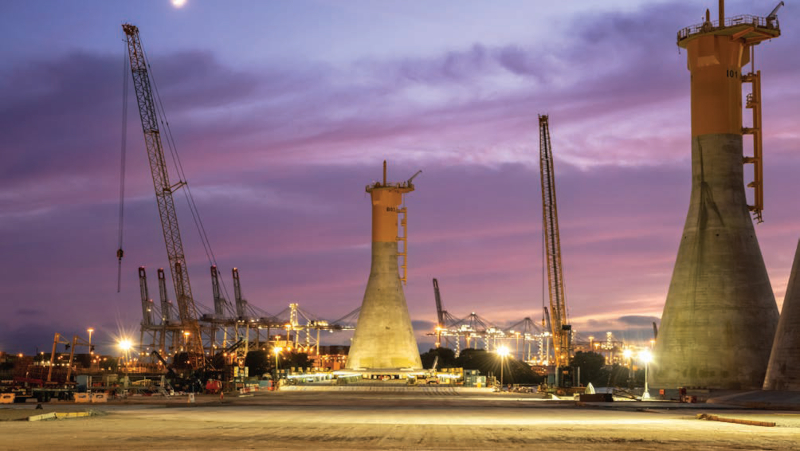 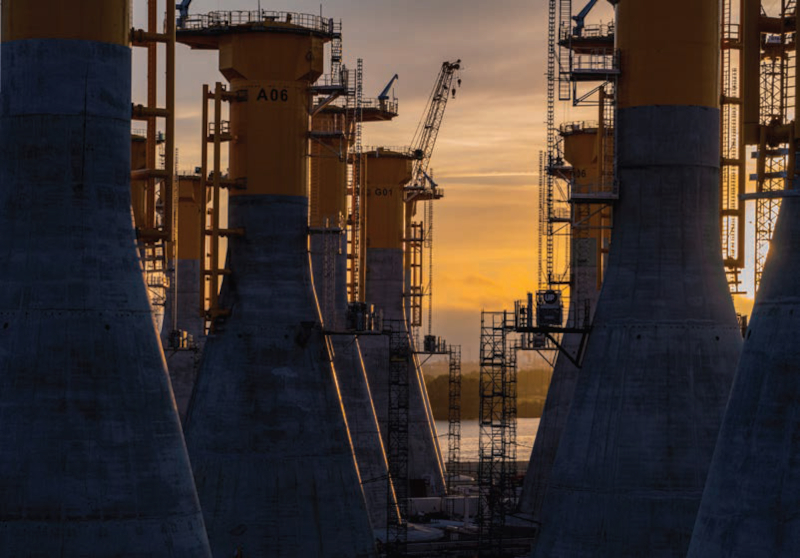