With COP28 due to take place in Dubai in under a year sustainability is in the spotlight. Elsewhere oil and gas, plus prestige mixed use builds, continue to generate demand for lifting and moving services. Christian Shelton reports.

Post-covid there is a feeling of positivity being projected by many crane rental agencies in the United Arab Emirates. According to Martin Kirby, managing director of Dubai-based crane rental agency Johnson Arabia, the region is seeing the positive effect of the government’s policies and reforms post-Covid designed to keep it a hub for business. “These include the transformation of the Dubai Expo2020 site to a new city called District 2020 and re-strategizing projects that were on hold to complete them,” he says. “To enhance our services we have retired some of our older equipment and are bringing in new cranes.”

With regards to this new equipment the company is focussing on acquiring environmentally-friendly machinery in order to work on projects that are looking to gain LEED accreditation – a globally recognised symbol of sustainability.

Johnson Arabia’s recent investments included a Liebherr LTM 1450-8.1, two MAN tractors, and multiple electric booms. “As market leaders we constantly evaluate what our clients are hiring on a larger scale from us and what will have long term benefit to our fleet and that is why we have decided to invest in so many new machines,” Kirby continues.

The purchase of the Liebherr LTM 1450-8.1, which was facilitated by Dutch crane sales and rental house P. van Adrighem, was due to the efficiency gains the crane provided, plus its 85 metre main boom. “We are pleased with our 450 tone Liebherr which has ECOmode so that the mobile crane’s fuel consumption is reduced by up to 10%, in addition to its massive lifting capabilities,” says Mohammad Fareed, crane executive manager at Johnson Arabia. “The crane was acquired with a longstanding partnership through Adrighem because they are pioneers in large crane supply and hold a vast equipment inventory that they manage from their headquarters in The Netherlands. With the new terminal in Vlaardingen [Rotterdam] they are strategically located for global maritime shipping as well as storage so they can work on acquiring and shipping equipment easily.”

The two MAN tractors that were added to the fleet of existing trucks will also allow for Johnson Arabia to have more control over the logistics and transportation of their equipment. It says it will have full control over equipment delivery times to help service clients better with no external delays.

It comes as no surprise that environmental credentials and sustainability are a key focus for the region’s construction firms and crane owners alike. COP27 has just finished in Egypt, while COP28 conference is scheduled to take place at the Expo City Dubai venue in November 2023.

According to the Expo Dubai Group, who are behind the transformation of the Expo 2020 site, Expo City Dubai will retain 80 per cent of Expo 2020’s built infrastructure, including 123 LEED-certified buildings and eight infrastructure projects rated ‘excellent’ under CEEQUAL – the international evidence-based sustainability assessment, rating and awards scheme for civil engineering, infrastructure, landscaping and works in public spaces.

Part of this retained infrastructure, through which world leaders will likely pass as they enter Expo City Dubai for COP28, includes the site’s carbon large carbon fibre gates. These measure 21m x 30m and Johnson Arabia was commissioned to conduct a necessary modification to them. This involved a complex tandem lift using a 300-tonne capacity Grove GMK6300L, with a 52 metre boom, and a 100 tonne capacity Demag AC100-4L all terrain, with a 50.4 metre boom.

The gates are installed on top of a bridge connecting the expo site to the access roads. The lift involved the two cranes working in tandem to execute a tailing lift from roads ten metres below either side of the bridge on which the gate was erected.

Sreethu Thulassdharan, lead engineer for the project, explains how Johnson Arabia’s team of engineers addressed the jobsite challenges: “The gates, weighing 1.95 tonnes and 3.9 tonnes, needed to be lifted over the bridge without full operator visibility, so each crane was positioned and operated carefully on either side below the bridge and our riggers and operator relied on radio communication for both lifting accuracy and avoiding damage to the carbon fibre structure.

An initial risk assessment of the jobsite revealed that the roads were not wide enough for the crane outriggers so we made provisions to spread the outrigger load on curb stones. We applied a safety margin of 25% for the tandem and tailing lifts and we used two spreader bars to stabilise the loads. There were no risks for offloading as we had enough open space below the bridge.

“This project was a milestone for Johnson Arabia because not only did it require careful planning but it also required great communication, skill and coordination for the entire team to be able to lift all the three carbon fibre gates.”

One of the world’s largest waste to energy plants has been built at Al Warsan 2 at a cost of AED 2 billion. On completion it will process 1.9 million tonnes of waste per year to generate 200 MW of sustainable electricity. It initially opened in the second quarter of 2020, although development is ongoing, and other waste to energy plants are being built around the country proving a fruitful source of work for crane rental companies.

In 2022, at the Al Warsan 2 site, UAE-based crane rental firm Al Faris was commissioned to set a 207 tonne generator and a 115t HP turbine on its foundations. To do this Al Faris used its 1000 tonne capacity Liebherr LR 11000 lattice boom crawler crane with a SDWB2 configuration and a 66m main boom and a 48m luffing jib.

Also at the Al Warsan 2 plant NFT Group worked with Yongmao to provide four custom luffing jib tower cranes. The technical and time requirements for the required tower crane were too high for any available local manufacturer, so cranes and construction specialist NFT Group contacted Yongmao Holdings and the two companies worked closely to make the required customised tower cranes in the short period of time available.

Manufacture took around six months including shipping. The cranes arrived on site in March 2022. The programme was to install the tower cranes in 25 days but NFT group managed to reduce that by 50% to complete the installation in record time. The STL 2400 was meant to be installed in 18 days but NFT completed installation in just a week. The larger STL 4200 was expected to take 25 days to install but the NFT Group managed to reduce that to 12 days. To achieve this, two fully-dedicated teams supported by a supervisor from the OEM, worked 12 hours a day. While one team off-loaded and assembled, the other team erected the assembled parts. Three mobile cranes were on site to cater to these simultaneous activities.

NFT Group also provided the site with monthly preventive maintenance and a dedicated technician on site 24 hours in case of emergency.

At another new waste to energy plant in Dubai Al Faris was commissioned to install a steam box. The installation was done at a height of 2.8m using the company’s in-house modular towers and other skidding equipment.

A key challenge was that the clearance while skidding was only 30mm. This meant a high level of precision had to be achieved for all measurements and markings during the operation.

Also the COG of the top part of the steam box was away from both the lifting points during the lifting of the load from the trailer. This could have caused the load to slide.

To avoid this, Al Faris made a temporary packing arrangement of stools at the corner of the steam box. All technical support documentation, execution plans and HSE protocols were prepared in-house and discussed with the client prior to project execution and the operation went smoothly.

With the world’s focus on the Middle East region at present, and for the foreseeable future, first for COP27, then the World Cup, followed by COP28, further news of progressive sustainability infrastructure projects are sure to follow. Keep reading Cranes Today for future updates. 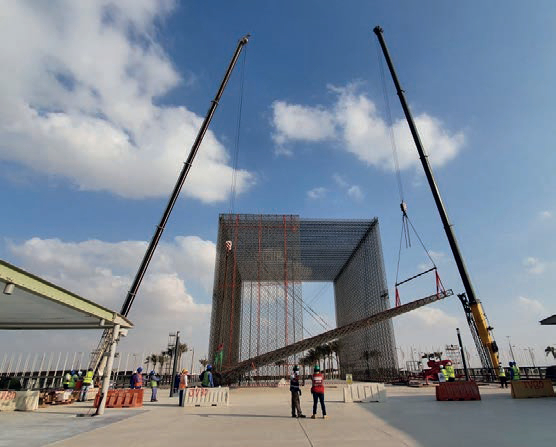 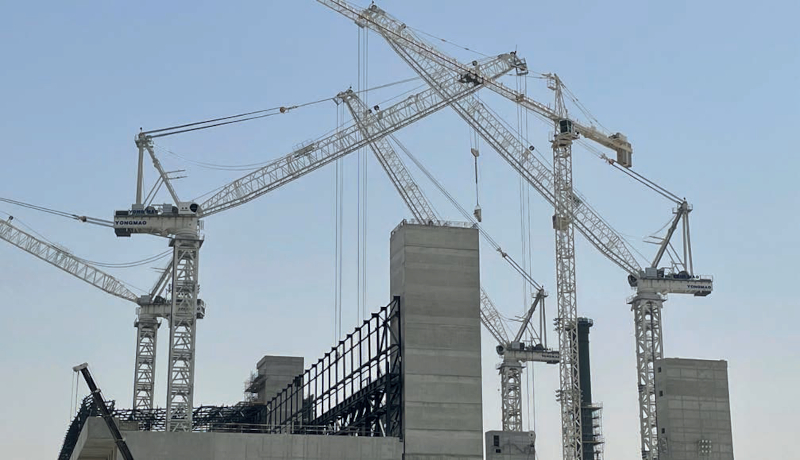 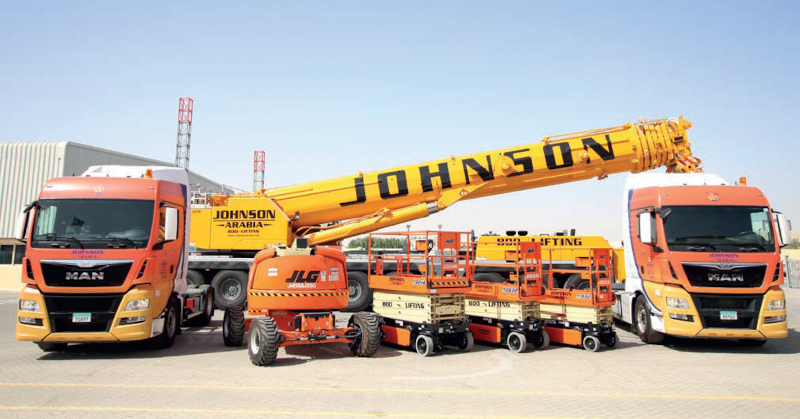 Johnson Arabia has been investing in new equipment, especially with an eco focus 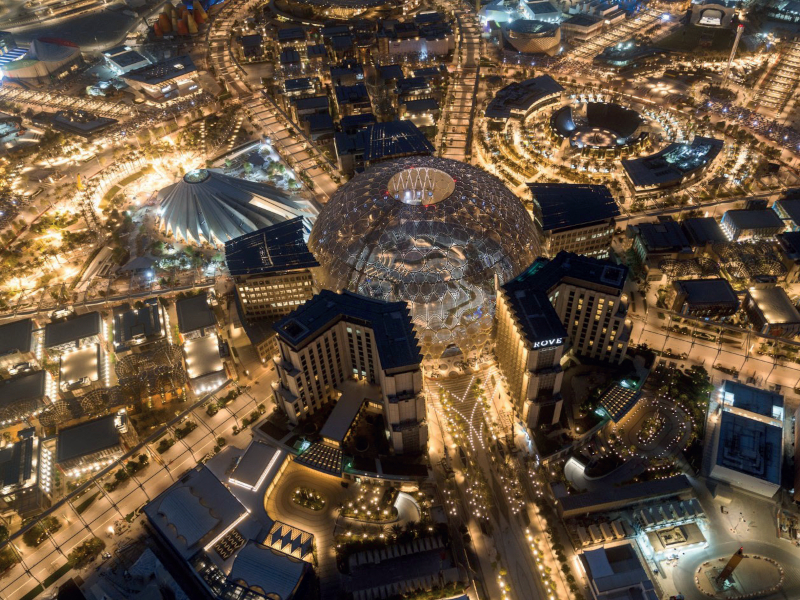