Tight curves and hairpins; steep and narrow roads; the High Alps are demanding for any vehicle. Driving those roads with a car needs undivided focus and attention. Doing the same with a five-axle crane is a one-of-akind scenario that comes with extreme challenges for both operator and machine.

The Zervreila dam stands at 1,862m in the Swiss Alps, near Vals in the canton of the Grisons. Swiss family-owned crane company Fager Kran AG was tasked with lowering materials to maintain and repair it. Getting there was the first problem. 3,000m peaks surround the dam and its reservoir. “That’s why we decided to use our Demag AC 160-5 for this job. With its extremely compact design and outstanding maneuverability, it was perfectly suited for the mission – both in terms of getting to the dam and of taking care of the work once it got there,” reports Fanger Head of Cranes & Transport Josef Waser. In addition, the crane had the power required to carry out the lifts, or rather the lowers, at the site.

Before setting out the AC 160-5 had to be prepared for the multi-hour trip to the work site. The counterweight base plate had to be removed in order to reduce the weight to less than 60 tonnes, which was necessary given the mountain roads that would be involved. The plate was loaded, together with the required counterweight and other accessories, onto two trucks that undertook the trying journey together with the crane – and it was a journey that came with challenges. The route was not only peppered with tight-radius curves, but also with tunnels that demanded absolute precision. “Sometimes we only had a few centimeters between the crane and the tunnel walls, meaning that our operator was threading the machine through the eye of the needle, so to speak” says Waser. And even though the team at Fanger is used to navigating this type of difficult route they decided to use a signalperson to make sure everything went smoothly.

The crane and trucks reached the concrete dam safely and on time, after which the team quickly set up the AC 160-5 despite the extremely tight space conditions – a mere six metres between the guardrails, to be precise – and in theory only: “We couldn’t extend the outriggers all the way to the edge of the dam due to safety reasons, so we were limited to an actual width of 5.4 meters after consulting with the responsible engineer,” Waser reports. However, these conditions allowed the Demag AC 160-5 to show its worth: the IC 1 Plus control system and a small outrigger spread of 5.3 meters meant that choosing it for the job had been the right decision. The loads - suction excavator components, a pontoon, pipes, and other material – weighed up to 7.8t and needed to be lowered 130 metres down. The hoisting gear with a direct line pull of up to 9.9t was well up to the task, and the maximum wire rope length of 330 meters meant that the crane had more than adequate reserves for the job.

The crane was equipped with a 32.9-metre main boom and 46 tonnes of counterweight. “Due to the dam’s convex contour, we had to work with a radius of up to 27.5 meters. However, that wasn’t a problem whatsoever for our Demag AC 160-5,” reports Waser, who is happy with the Demag crane’s performance. Everything went smoothly with the job, so that the crane operator was able to complete all the lifts in a single day. 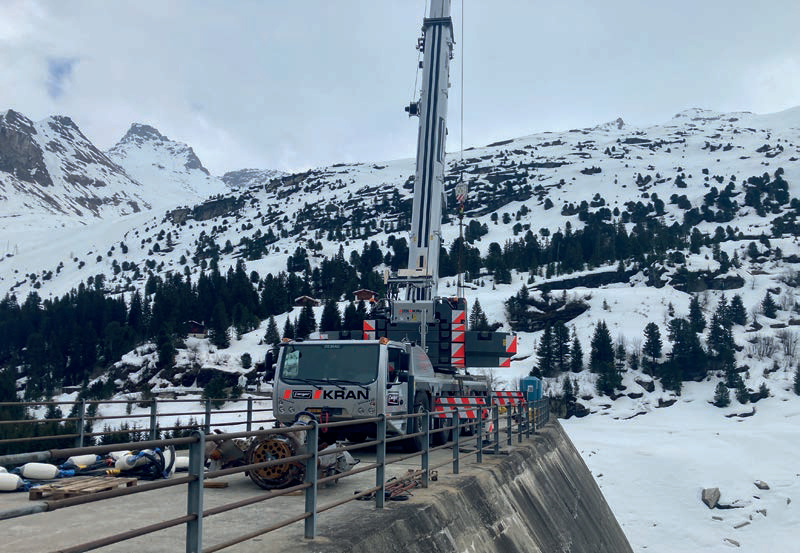