The pandemic was supposed to spell the end of the office building. Why waste an hour or more every day on a tedious and tiring commute to a crowded city and a desk-space in a building whose commercial rent was costing your company a sky-high sum when the internet now enables you to do your job from home? Pre-Covid, workers would arrive at the office already jaded and sweaty having spent far too long crushed armpit-to- armpit in a crowded train. Working from home offered an end to all of that with the added bonus that, unless there was a video conference, you didn’t even need to get out of your pyjamas until past midday.

That vision has faded. With health restrictions easing, managers are keen, for reasons we need not go into here, to get us back into the office. Offices are full again and construction of new offices is booming. So, too, is construction of new retail space, arts spaces, hospitals, schools and all the applications that can usefully be described as ‘commercial’ – by which we mean not primarily residential.

Even that definition is loose since many, indeed most, large prestige developments now are mixed-use with retail and leisure on the ground floors, offices above them, and high-end residential apartments rising skywards above that. The plain dull office block is having a make-over to make it more attractive to the post-pandemic worker.

We can be talking large, sometimes very large, projects here, that can transform a whole area of a city. Canary Wharf, begun in the 1980s, created a whole new business quarter out of derelict London dockyards and has become iconic. Hudson Wharf in New York has similar, or larger, ambitions. Building on two ten-acre sites, on piles and bridging beams over existing and functioning rail tracks, its 6.2 million square feet include: public plazas with high-end retail spaces and a kindergarten on the lower levels; multiple stories of office space above that; then residential apartments taking up the rest of its 103-storey high-rise height of 387 metres. Then there’s the public viewing platform known as The Edge, sticking out as a triangle cantilevered above empty space 100 stories up. It is the highest open viewing platform in the western hemisphere offering views over central New York and the Hudson. That is Phase One of the project, which competed in 2019. Phase Two, on an adjoining ten acres, also over rail tracks, appears to be on hold.

Such projects, of course, are complex. (Hudson Yard has had to include fans, of a type normally found on jet engines, set in the space between the rail tracks and the plaza gardens above them to get rid of the locomotive-generated heat in order not to roast the roots of the trees in the plaza above.) Consequently, they require many different types of crane. They are also long-term in their construction. Hudson Yard broke ground in 2018 and is only half-completed. Some of the cranes used, therefore, may have to remain on site for several years.

One such current, and high-profile, development in London is 40 Leadenhall Street, in the square mile that is the heart of the City. The building, in a prime location, is one of the biggest schemes to ever receive planning permission in the City of London and is destined to become a landmark. It’s developers also hope that it will tempt labourers in the financial and insurance industries back into the office-based lifestyle.

Its stepped-back design, ranging from seven to 34 stories, resembles classic North American skyscrapers of the early 20th century. This neo-gothic style of architecture also influenced the DC Comics illustrations for Batman and the visual style of the more recent Batman films, for which reason the Leadenhall project has acquired the nickname 'Gotham City'. When it is complete it will have 82,700 m2 of office space and 1,900 m2 of retail.

On a very tight construction site prefabrication is being extensively used, with elements being brought in from outside, barcoded, and placed according to 3-D BIM modelling from Autodesk’s 360 software. The greater weight of prefabricated units requires heavier capacity lifts for the cranes. Mace, the developer, has been using six Wolffkran tower cranes on the site. These are 100 B, 180 B and 355 B luffing jib models. The procedure is to erect them to free-standing heights and then climb them to their maximum working heights, which are up to 163m. The project will require 14 climbs across five of the six cranes, using the Wolff external climbing system. Construction started in May 2020 and completion is due in 2023.

Major projects of this kind are a hallmark of the Middle East. In Dubai, for example, no fewer than 14 Terex luffing jib tower cranes are at work on the ‘Jewel of the Creek’, a massive one million m2 mixed use development in the Port Saeed area on the north shore of Dubai Creek. The complex rises partially on land and partially on a man-made island with an inner creek; it will include a waterfront promenade and a marina on the Creekside. 17 high-rise buildings will house apartments, hotels and offices, a large space for leisure with event halls, a sports and recreation centre, plus the longest swimming pool in Dubai. The idea is to transform the location to a major urban centre and a prominent landmark in the heart of Dubai.

A complicating issue has been the jobsite location itself. As well as the heat – up to 51 degrees – constructing the basement areas has been problematic. Confined space has made difficult to move the cranes around the site as the project moved forward.

“All the cranes are of luffing jib type, from 10t capacity CTL 140-10 to the 18t CTL 260- 18,” said Emam Al Sayed, head of the mechanical department at construction company GCE. “They can be assembled in a small area, which was necessary on this site with such cramped areas of operation. Their components are quite light so you can use a small crane for installation, and the short counterjib helps with manoeuvrability.

To manage the activity of so many cranes in a restricted area we have the AMCS anti-collision system installed on the cranes. The cranes are mainly free standing, with tower heights up to 110m or with in-shaft installation and at least a 50m jib.”

The scope and scale of the project required a large and comprehensive range of different lifting solutions and a lifting company with considerable resources to provide them. In this case Maxim Crane, nationwide but headquartered in Pennsylvania, provided 11 tower cranes, two conventional crawler cranes, eight all terrain cranes, five hydraulic truck cranes, nine rough terrain cranes – and a carry deck crane as well, to bring the total to 36 cranes. Maxim also provided project planning and engineering and industry leading safety practices for the duration of the project. The tallest tower reached 650 feet and the cranes were on site for just over two years.

These are all large, not to say mega-scale projects. Of course, not all commercial construction is on that scale; a simple prefabricated steel-framed warehouse may need no more than a medium-sized all-terrain to erect. As well as construction there is maintenance and repair in the commercial sector, and that can call for an even wider variety of lifting gear.

Thus UK plant movement projects and contract lifting specialist Mechanical Movements, based in Gravesend, have used on commercial projects over the past few months: a 26-tonne Bocker truck-mounted crane to lift three panes of glass from a lorry bed to the roof of a retail/ leisure client in London’s Camden; a 300-tonne crane with a 60m luffing jib to place chillers and air handling units on the roof of an office building in New Gate Street; a Telehandler 2506 to replace ventilation equipment in an underground car-park for a client in Northamptonshire; an onsite tower crane to install air conditioning equipment on new civic offices in Crawley; a 60 tonne mobile crane to lift and manoeuvre four air handling units into a steel frame at Akzo-Nobel offices in Berkshire; a Spierings AT6 mobile tower crane for a contract lift of a generator onto the roof of a 34m high commercial building in Islington; a Liebherr LT1045 mobile crane to lift two chillers onto the roof of a two-storey hospital in Chertsey; and, at the other end of the scale, a truck-mounted Hiab knuckleboom to move eight large potted trees from outside a London University building in order to make room for scaffolding.

Lifting in the commercial sector is clearly as varied as in any other. Be prepared to lift a potted plant as well as the cladding of a skyscraper. 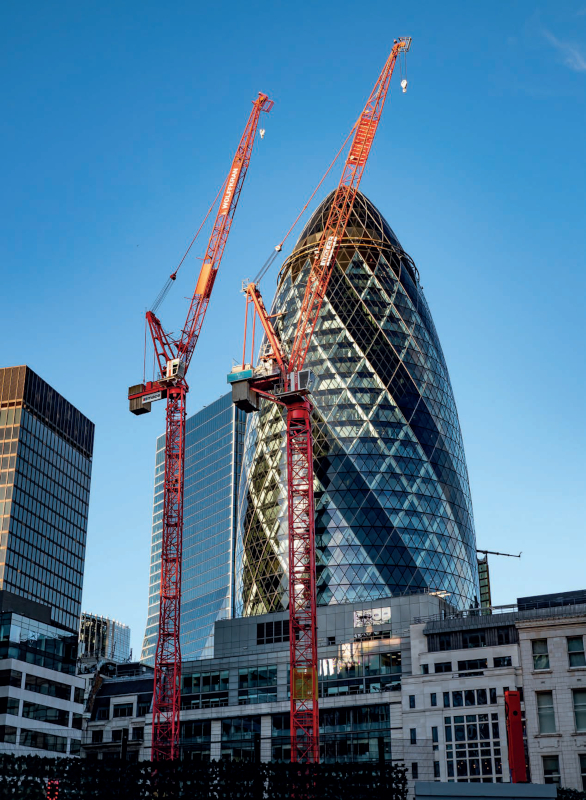 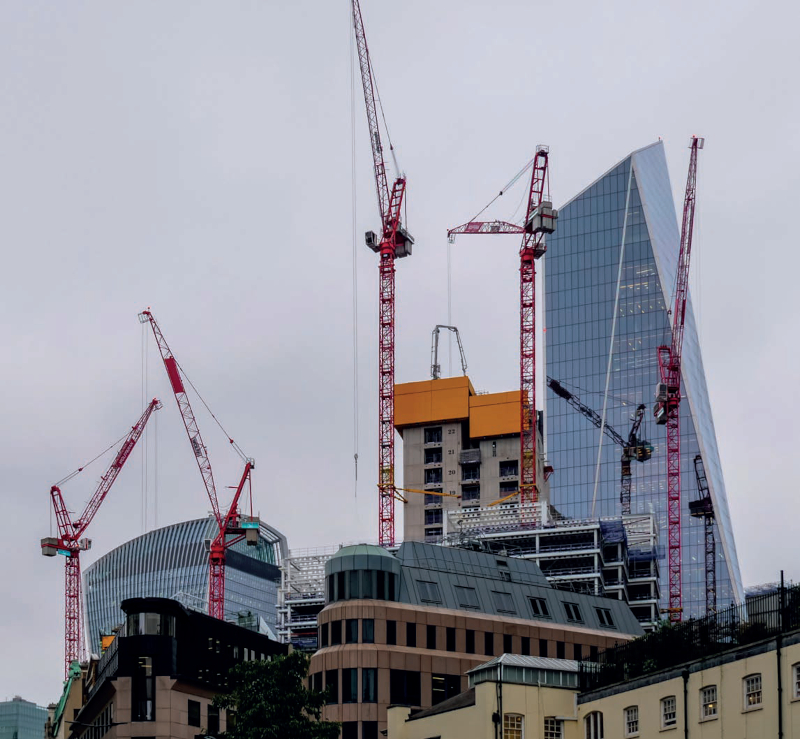 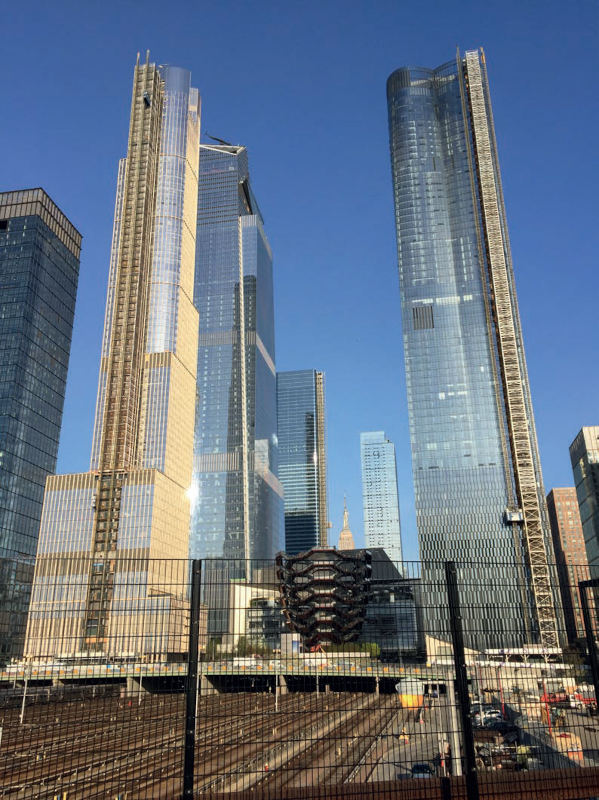 Phase One of Hudson Yards with the rail tracks over which Phase Two is to be built. Credit: Wikimedia Commons, Anthony-22 New York 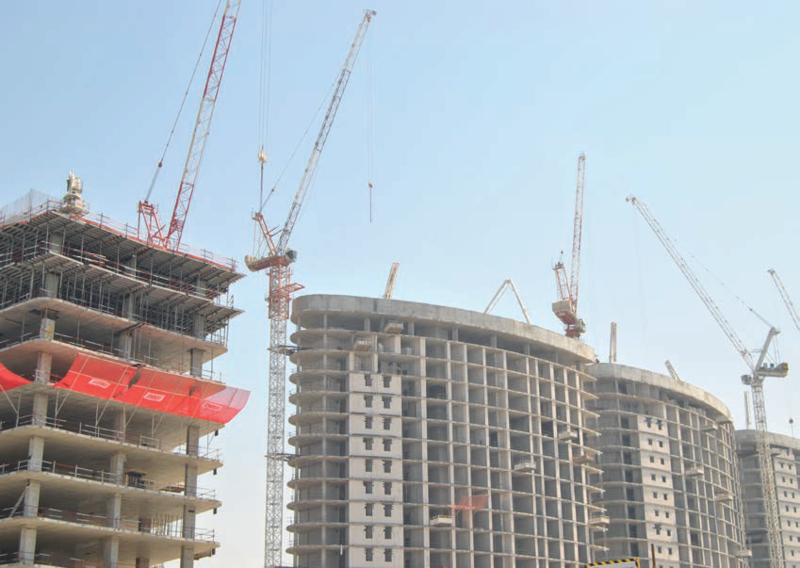 Terex cranes on the Jewel of the Creek jobsite in Dubai