Barnhart has removed and replaced two feedwater heaters at the Westar Energy power plant in the state of Kansas, USA.

“This job involved the use of precise engineering and a number of applications that resulted in minimal downtime for the customer and saving of nearly three weeks in setup time over the next best alternative,” said John Merkle, project manager at Barnhart Crane and Rigging’s Oklahoma City office.

As the structure around the vessels could not be removed, there was only minimal clearance to manoeuver the vessels onto the turbine deck.

The two-feedwater heaters were stacked on two floors surrounded by a structure that was not within reach of the overhead cranes. Both vessels had to be slid out onto the turbine deck floor to get to the hook.

Following a feasibility study to establish whether an engineering solution could be implemented to remove the components safely and efficiently, Westar Energy instructed its onsite maintenance company, Day & Zimmermann, to hire Barnhart to remove and replace the two-feedwater heaters during a planned outage.

Barnhart’s engineers determined that the upper vessel would have to be slid out, suspended, and lowered through a hole in the floor to be set to the slide track prior to being rolled out to the turbine deck floor.

Another challenge presented itself in the limited capacity of the turbine deck floor that required a cribbing under a heavy slide system to be located directly over support beams in the floor.

Light slide gantries were also needed to slide and lower the upper feedwater heater because the limited headroom caused freedom of movement issues for the overhead crane.

Merkle said: “We had to support the upper feedwater heater on the south side with only a narrow structure beam to use, and all throughout we dealt with headroom, clearance and load bearing issues.

We put a lot of time on the front end with site visits and engineering to address all these challenges long before the actual work began.”

A light slide system was utilised to slide the lower feedwater heater forward. It was then jacked up with pull up jacks, and heavy slide track was laid underneath in order to roll it out with power saddle rollers to the awaiting overhead crane.

The overhead crane had complete freedom of movement over the turbine deck floor because Barnhart was able to use the light sliding gantries to minimize the overall width of required equipment. 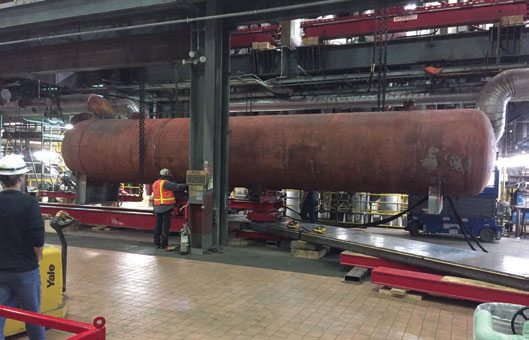 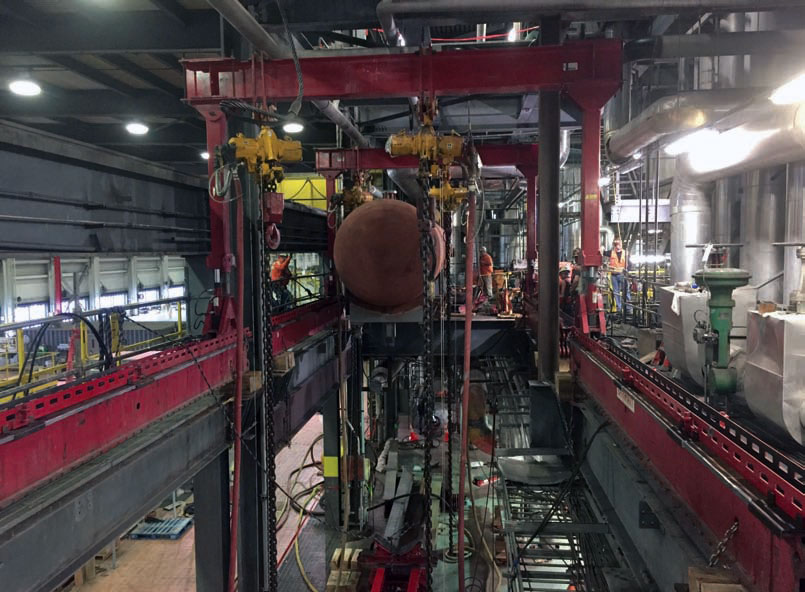