Caracas, Venezuela
Venezuelan state owned petroleum company PDVSA has ordered 76 flat top cranes from Terex, for use on a project to build 50,000 new homes a year. Half of the order is for CTT 161A-6TS cranes (the model shown here) and half are for CTT 91-5 TS12 cranes, all of them manufactured at Terex's tower crane plant in Fontanafredda, Italy. The cranes will be delivered through 2012. Terex says this is one of the biggest orders of cranes for Latin America. "This order proves our brand strength and our commitment to Latin America," says Ivens Encarnação, general manager, Terex Cranes Latin America. "The order with PDVSA positions us at a new league in Latin America, and increases significantly the presence of Terex Cranes in the local crane market," adds Ivens.

The 5t, 50m reach, 71 EC-B 5 is being supplied on a 15-month rental basis by Liebherr's exclusive distributor for Colombia, MCS Colgruas.

"We mounted the crane at the front of the building, and at first we had it on the standard height of 37m.

"As the blocks grew in height, simultaneously, we moved the height of the crane upwards to its final level of 50m."

Makro installed 91 1.5MW turbines. Each turbine tower was made up of three steel sections, reaching a hub height of 80m. Makro needed to transport and lift 91 hubs and nacelles, and 273 blades and tower sections.

Brasilia, Brazil
In the Brazilian capital, 12 Potain tower cranes from Brazilian dealer Locabens have been used to upgrade the country's national stadium ahead of the 2014 World Cup. The stadium will host seven matches during the football world championship. Work on upgrading the venue was 63% by the middle of July 2012. On site, 12 Potain tower cranes and 13 mobile cranes are in constant use, supporting approximately 3,000 workers, who operate on two shifts a day, six days a week. The Potains are set up to provide lifting coverage across 92% of the job site. Around the outside of the stadium, eight Potains are being used. Locabens suppled MC115Bs, MC125s, MC175Bs and MC205Bs for this part of the job. The cranes were set up with 2m x 2m tower sections, allowing them to exceed heights of 50m without anchors. Inside the stadium, four Potain MC310K12 cranes were set up with 50m to 60m jibs. 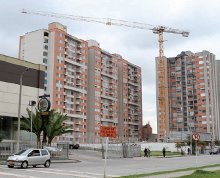