Showing off jobs around the region.

Hardangerfjord, Norway
Danish dealer Ajos supplied MT Hojgaard with two Potain MDT 128 topless cranes to place cables on the Hardanger suspension bridge in Norway, working from the bridge's pylons where working heights exceed 200m. The exposed site means the cranes have no protection from the harsh Scandinavian weather, where temperatures fall as low as -40°C and wind speeds can reach up to 217km/h. Work is continues 24 hours a day, as conditions permit, meaning highly durable equipment is required. The cranes have been fitted with Potain's powerful 50 LVF GH Optima winch, with four falls of wire rope. This configuration allows the cranes to lift their maximum capacity, and allows both high-speed hook operation and more precise movements when placing loads in their final position. The cranes are currently configured with 35m jibs.

Tilbury, UK
Abnormal Load Services transported a Herrenknecht tunnel boring machine from Germany to the UK for electricity transmission company National Grid's London Cable Tunnelling Project. The 110t EPB4000 TBM measured 4.72m across. ALS arranged for the transportation of five breakbulk components plus 17 standard trailer loads by road from Herrenknecht's manufacturing site in Schwanau. The project involved crane lifting from trucks to barge in Germany and from barge to trucks at ferry port, before onward transport by ro-ro ferry and road to the job site.

Comprehensive surveys were required in the UK to secure a suitable route, which avoided multiple bridge weight and height restrictions in East and North London.

It took six days for delivery of the main components (using a combination of road transport, barge, and ro-ro ferry) from Schwanau through to the London N4 jobsite where the TBM being is now being used for National Grid's new mains power cabling project throughout North London.

Kaunisvaara, Sweden
Lambertsson supplied six Potain top-slewing and self-erecting tower cranes to work on a mine project in the Swedish Arctic. The cranes are working more than 10 hours a day in temperatures as low as -25°C to keep the €560m Kaunisvaara mine project on schedule.

They are working directly for main contractor Peab. Four of the cranes are located at the main mine site where they lift general building materials and equipment weighing up to 20t. The other two cranes are 300km away building a new port terminal in northern Norway, which will be the main transport hub for the new mine.

The top-slewing cranes working at the mine are an MD 365 B with a 75m jib, which is located at the crushing station, and an MD 560 B with an 80m jib, which is working between two stock piles. The two self-erecting cranes, an Igo 36 and an Igo 50, bring flexibility to the project and are moved around the site wherever necessary.

The project is being developed by Northland Resources, an international mining company. It will create a complete iron ore processing plant over what is regarded as Europe's last big iron ore reserve in the north-eastern tip of Sweden, near Sahavaara.

Jelling, Denmark
The historic Jelling rune stones were originally raised around the years 955 and 975 and are on UNESCO's world heritage list. They mark Denmark's transition from paganism to Christianity. The first stone was put up by pagan King Gorm the Old, in memory of his wife. The second, erected by his son Harald Bluetooth, memorialises his parents, and proclaims Harald's conversion to Christianity.
Geologists recommended moving the stones under cover, to protect them from the elements. Hertz Material used a Maeda 405 minicrane to erect covers for the stones. The heaviest section weighed 1t. The project was overseen by Poul Clemmensen from Hertz Materiel. 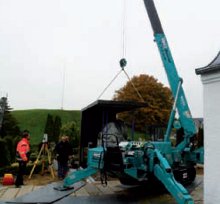 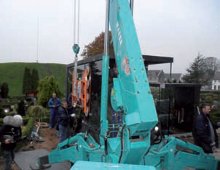 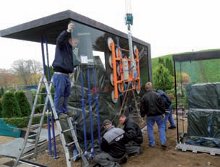 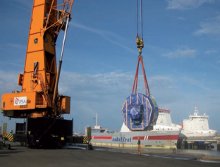 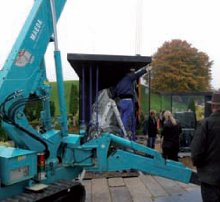