Latin America Project round up

This month we review projects from Mexico, Colombia and Brazil.

Mexico City, Mexico
Ingenieros Civiles Asociados SA (ICA) has used two Terex AC 500-2 all terrain cranes on the building of an elevated highway in Mexico City. The cranes worked individually and in tandem to lift prefabricated concrete columns weighing between 10t and 220t. The AC 500-2's lifted at an average height of about 20m at a radius of 10m and 15m.

Once lifted and positioned the elements were welded and secured. Then the next piece was delivered and the process repeated. When the cranes needed to move, they removed their own counterweight onto a low-loader and were transported to the next jobsite.

ICA said that logistics were important to ensure construction was kept to the 14- month schedule with three to four sections being installed each night. Because of the size of the main elements, they were erected one at a time although smaller elements can be erected simultaneously. The support columns feature an integrated shoe and head design. This makes the erection process much quicker although precise positioning of the columns is needed to locate each unit into deep foundations prepared in advance.

The first section of the 11.3km long Autopista Urbana Sur (Urban Highway South) has been designed to alleviate the congestion to the south side of the City cutting journey times by half.

The cranes are working, alone or in pairs, on the road's bridges a section at a time; as each section is completed, they are dismantled and then re-erected at the next section.

The six Linden Comansa tower cranes are being used in the construction of bridges as part of the country's 1,071km Route of the Sun, built to reduce travel time between the country's major cities. An 18t 21LC400, two 18t 21LC210s, a 5t LC5211, an 8t 10LC140, and another crane of the same model will build a total of seven bridges in section 1 of the road. The cranes are operated by Gigacon the Spanish manufacturer's official distributor in Colombia.

The cranes are working on the bridges consecutively: once they have completed one bridge they are disassembled, transported and erected at the next jobsite. Due to the demanding work schedule some of the cranes work in double shifts.

Chibatao, Brazil
Tomiasi Logistica Pesada helped expand at a pier at the port of Chibatao, near Manaus. "Tomiasi is located not far away, on the Amazon river, so to ship the cranes, we just put them on a barge, fully loaded," says Jander Roque, sales analyst, Tomiasi.

"The difficulty is that we had to perform a triple lift with cranes on barges. The load of each section was between 320t and 360t.

When more mobility and versatility was required local Manaus based lifting and rental company Entec Longhi provided Terex AC 200-1 and AC 350/6 all terrain cranes. Also used on the project was an RT 280 rough terrain crane and a TC 780 truck crane.

The all-terrain and truck cranes were used for multiple kinds of lifting, from loading heavy steel components to placing pre cast components in difficult and hard to reach places. The cranes were on site for 6 months and carried out over 90 lifts,some of them at 25m height, 24 m radius and lifting 28t.

São Paulo, Brazil
Cunzolo Cranes and Platforms worked on the Raposo Tavares highway the road stretches between Sorocaba and Itapetininga, São Paulo, Brazil. Most of the work involved the displacement, hoisting and installation of lifting beams and bridges. The equipment used involved cranes of 220t , 80t and 100t trucks and dollys.

The projects second phase included the building of 18 viaducts and bridges. Investments totalled BRL16.4m, according to the concessionaire that manages the highway. The works of doubling Raposo Tavares should benefit 191 thousand inhabitants of the four municipalities of the region, where 10,800 vehicles pass daily.

Airton Rirochi Fukumoto operational manager Cunzolo, said: "This is a job that requires special attention, because we work with the rafters above rivers and very close to the track, with great flow of cars, but everything went very well" 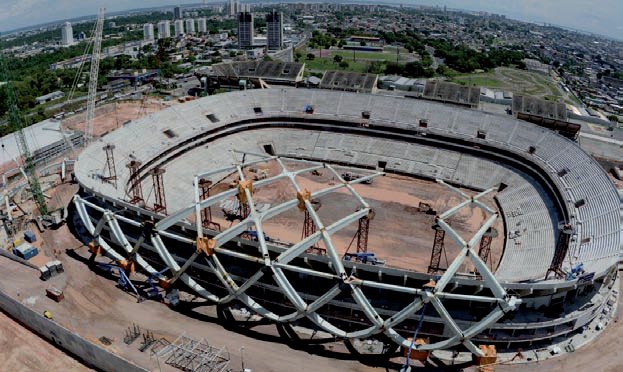 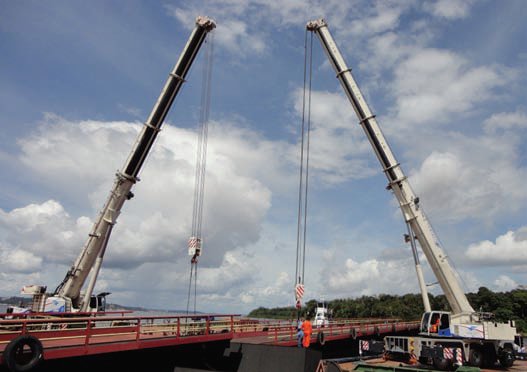 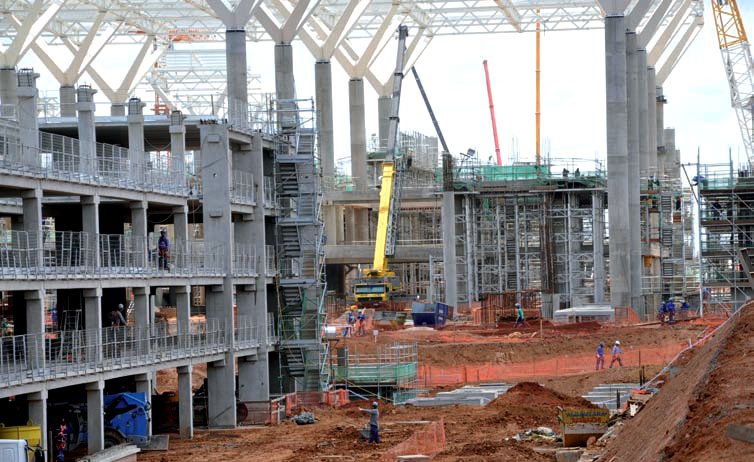