Delivering goods into inner cities by truck-mounted crane brings diesel emissions, unwanted and soon to be strictly controlled. Hiab have worked with a builders’ merchants Lawsons to produce a green solution. Julian Champkin attended the opening of the new Hiab London facility, and saw the crane.

The crane delivers building supplies—bricks, cement and the like—to sites all around the city. The truck is powered by CNG, compressed natural gas. That makes it emissions-friendly for working in central London. The crane that is mounted on the back of the truck is powered not from the truck’s engine but by electricity from a bank of batteries mounted under the truck’s flatbed. That makes it, too, emissions-friendly—and virtually silent as well.

Conventionally, the hydraulic power for a truck-mounted crane is supplied from the truck’s diesel engine—which therefore runs while the crane is at work. This is frequently in residential areas, where the supplies on the truck are unloaded; both noise and fumes are emitted.

Hiab’s new ePTO—it stands for electric power take-off system— avoids that. The batteries drive an electric pump that supplies the hydraulic power. The truck’s engine is switched off while the crane is at work, so there is no continuous thump of diesel or smell of exhaust to annoy the neighbourhood. ePTO is already in use on Hiab truck cranes in urban environments, but hitherto it has been mounted only on diesel-powered trucks. The combination of zero-emissions crane on low-emissions truck is, so far, unique.

That combination is the brainchild of Lawsons, who are the largest independent builders’ merchants in London and the South-East, working jointly with Hiab, who supplied the crane; the truck is an Iveco 26-tonner. “It was a collaboration,” says Mike Kelly, of Lawson’s group transport department. “We have been three years talking to Hiab and exploring different vehicles and options.”

The idea of course is for a truck-mounted crane for working in London’s new ultra-low emissions zone, the ULEZ, which will cover most of the city and comes in early next year. But as more and more cities worldwide introduce air quality controls it is an idea whose time would seem to have come. Low-emission buses for cities are becoming almost commonplace; low-emission cranes may not be far behind.

“In operation, the batteries for the crane are charged up overnight by a conventional plug and socket into the mains power supply,” says Kelly. “First thing in the morning the operator unplugs, uses the crane to load up, and drives to the destinatio— where he can switch off his engine and unload the vehicle using the batteries; the electric motors are practically silent.”

The crane is a Hiab 142, with 8.2m reach and a capacity of 1.5t. “A standard load of bricks comes in well under that,” says Kelly. The batteries have an 8 hour life on full charge, “but in practice the crane is most unlikely to be working an 8-hour day,” he says. “Each of our trucks average three or four deliveries a day. When the truck is on the road, driving to the next site or back to the depot to re-load, the crane of course is not being used.” And if the batteries should by mischance go flat the option to operate the crane conventionally, from the truck’s engine, is still there.

“We want to be green,” he says. ‘We are conscious of the importance of emissions. We have been looking at alternative fuels for our fleet of trucks for four years now.” Electric trucks were considered and rejected, as forcing too great a loss of payload. Lawsons have 17 branches in and around London, 14 of them within the M25 orbital motorway.

“Our biggest is in Camden, which happily has a CNG filling station just half a mile away from it. The infrastructure for CNG is bound to increase of course, but that was a consideration.”

The gas is stored in eight cylinders of 80l each, located under the chassis just behind the stainless steel box that houses the batteries. “It is all so new that we don’t yet know what mileage per litre we are going to get; we are hoping for 180 to 200 miles per fill in the city.”

The gas vehicle emits 70% less NOx, 99% less particulate matter, and up to 95% less CO2 if it uses biomethane. On the road the vehicle is up to 50% quieter than traditional diesel trucks. Hiab claims that the ePTO system delivers 60–70% lower fuel consumption for the crane, as well as 70% lower operating costs, while the lifting capacity is unaffected.

When the crane is not in use the ePTO automatically switches off to save energy and battery capacity. Buying a bespoke and new combination from Iveco and Hiab instead of an off-the-peg truck and crane has had its costs of course, in time and effort and money.

Kelly is not repentant. “We have a brilliant boss who lets us do new and exciting things. Being pioneers does cost more; but we expect to break even over the seven-year lifecycle of our trucks, and we are willing to pay to be the pioneers.”

But there is some sort of justice in this world. That willingness to pay more to be green may have brought its financial rewards. The previous mayor of London, Boris Johnson, had suggested the ULEZ would begin in 2020; his successor Sadiq Khan has brought the date forward to April 2019. From then, heavy vehicles that fail to meet Euro VI emission standards will have to pay £100 a day to drive within the zone. “So we are ahead of the game on this one,” says Kelly.

“Bringing ULEZ forward by a year must be playing economic havoc with an awful lot of companies.”

Buses in London and many other cities are already low emission, by battery or gas or hybrid. This is the first time a truck-mounted crane is similarly low emission.

“But diesel is getting such a bad press that we have to do something. There is talk of a Euro VII emission standard for diesel, but I doubt if that will happen.” Their fleet is of 70 large conventional diesels and 25 3.5t trucks. “We are sticking our toe in the water with this one,” says Kelly.

“We will try it for six months; if it works, as our fleet goes through its life cycle we shall get more.”

Feeling justifiably proud of their efforts, Lawsons have bought registration number-plate ECO2 LAW for the vehicle; and they have also bought registration plates ECO3 LAW through to ECO5 LAW—which is an indication that they hope it will not be a one-off. As more and more cities introduce emissions control, it may be the first of very many such truck-mounted cranes.

“Is it the shape of things to come?” says Kelly. “We hope so. We keep pushing boundaries.” 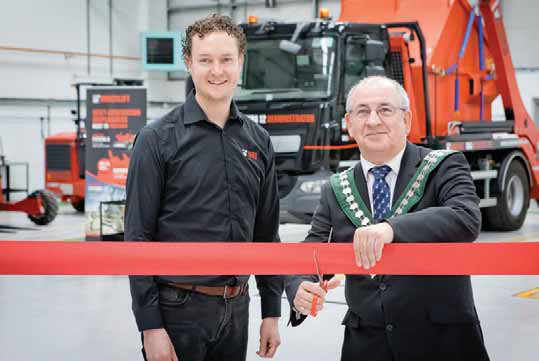 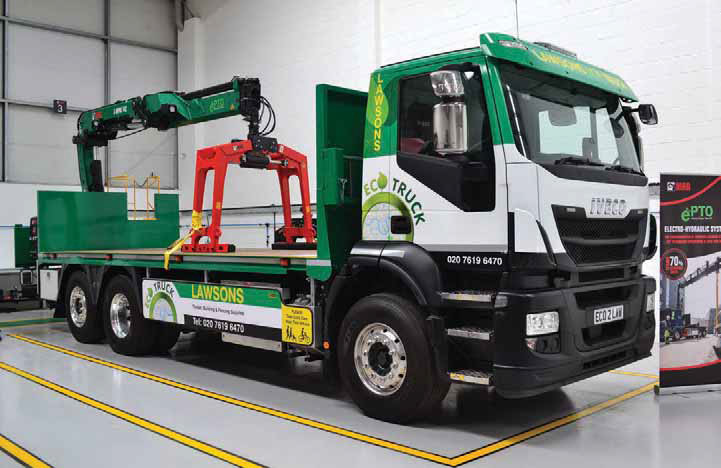