In the Philippines a cable-stayed bridge is being built to join the islands of Cebu and Mactan.

Once completed the bridge will span approximately 650 metres and be supported by two of 150 metre towers. To help build the bridge two Comansa 21LC660 flat-top tower cranes (36-tonne versions) are being used.

Due to the location of the jobsite there were a number of logistical challenges in setting up the cranes. As the bridge’s towers are not accessible by land the first Comansa tower crane had to be erected using a crawler crane mounted on a boat. The second tower crane was erected from a temporary island that first had to be built. According to Comansa the tower cranes’ modular system, with its compact pieces, were key in enabling them to be erected in such difficult circumstances.

The tower cranes are being used for a wide range of tasks. First, utilising 80 m booms, they helped build an accessible perimeter area around the bridge’s towers. They have also been lifting heavy equipment, including mobile cranes, boom trucks and concrete pumps weighing up to 32 tonnes, concrete buckets and pylon formwork and cables. The ability to automatically change reeving, combined with the Power Lift system, has enabled the cranes to adapt to the wide variety of loading jobs, said Comansa.

As the Philippines are affected by typhoons during the rainy season, the tower cranes are designed to support winds of up to 250 km/h. Plus, due to their height and the proximity to Mactan- Cebu Airport, both cranes and their booms have been fitted with safety lights in compliance with civil aviation regulations.

Both tower cranes were struck by lightning during the construction work but, due to their lightning protection, the operators were unharmed and the cranes continued working after undergoing mechanical and electrical checks (assisted by the Comansa technical team via its online support).

Completion of the Cebu- Cordova Link Expressway bridge is due in the first quarter of 2022. The construction work is being carried out by Cebu Link Joint Venture (CLJV), a joint venture between ACCIONA, First Balfour and DMCI. It was awarded to CLJV by CCLEC (Cebu Cordova Link Expressway Corporation), a subsidiary of MPTC (Metro Pacific Tollways Corporation) and represents a major construction project for the region. 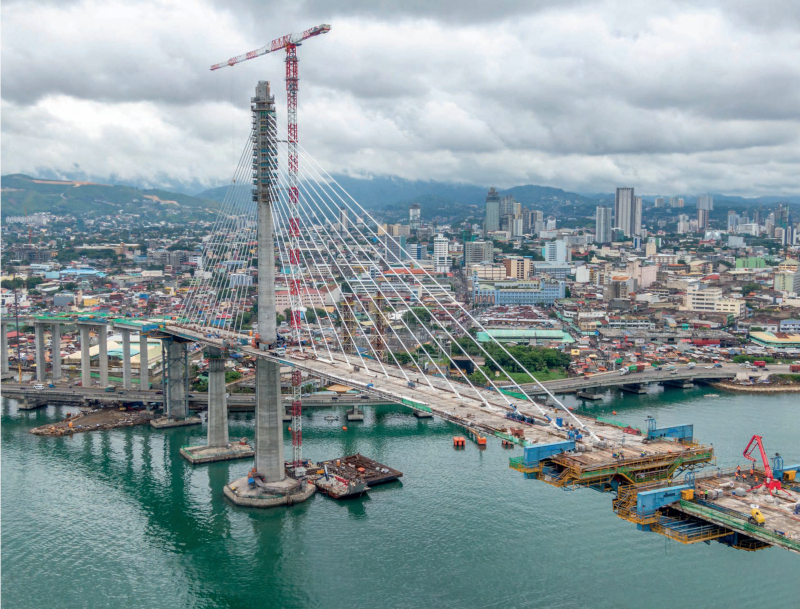