The crawler crane is king, ubiquitous on almost every infrastructure job site. The reason is simple: they rule at what they do. Julian Champkin reports.

There are rough-terrain cranes; there are all-terrain cranes; but for heavy lifting and moving on rough ground for large infrastructure projects and the like, the crawler has been and remains the king. The reason for its dominance is simple: tracks are better than tyres at moving around off-road. They spread the load. Nor do they need outriggers, and the 360 degree travel of the slew gives easier pick-up with less manoeuvring. The size of a crawler is almost infinitely scalable, from small mini-cranes and glazing robots on rubber tracks controlled by an operator walking beside them to the very largest of heavy-lift cranes with hook heights of 200m and more and capacities in the thousands of tonnes. A pedant might say that a rubber-tracked machine is not a crawler. I could dispute that - it certainly does not run on pneumatic tyres so what else would you call it? – but for the purposes of this article I will let the pedant have his way and limit the term ‘crawler’ to something that is mounted on metal caterpillar tracks rather than rubber ones.

The boom of a crawler can be lattice or telescopic. As a technology the lattice crawler has been around for a long time, with geometries and basic shapes that have stayed recognisably similar. The tele-crawler is not so old: crane historian Stuart Anderson, a frequent contributor and advisor to this magazine, tells us that the first manufacturer to put a telescopic boom onto a crawler undercarriage was Grove in 1967 with its 25USt (22.7t) 225-T; UK company Coles Cranes followed a year later. Other types of lifting gear can also be set on top of a crawler chassis: Liebherr for example has its R-series of fast-erector cranes on just such a mounting.

For all its near-standardised outlines crawlers are, like all other cranes, developing. Digital control and safety systems are becoming standard. Liebherr, for example has its Gradient Travel Aid for the safe negotiation of slopes and inclines. The crane’s control system automatically calculates the centre of gravity and warns the operator before the crane leaves the safe area. While travelling, the operator receives information about the permissible and actual gradient and the crane's overall centre of gravity at all times. The system is available for all the company's crawlers.

But the big technological advance in crawlers just now is electric power. Liebherr’s 200t capacity LR1200.1 ‘Unplugged’ lattice crawler, introduced in 2021 has been well covered in this magazine. There is also an LR 1250 version, and to these Liebherr has this year added the LR 1130.1 and LR 1160.1 to cover the 100-200t capacity range. These are not impractical experimental models just for show: Select Plant Hire, the crane hire division of Laing O’Rourke, for example, has its fleet of Liebherr electric crawlers currently at work on sites for HS2, the UK’s huge and important rail infrastructure project.

Visitors to this year’s Bauma will find Liebherr’s lattice electric crawlers being joined by a teleboom offering from Sennebogen, in the form of their 653E Electro Battery. It is a 50 tonne machine equipped with a 210 kWh battery pack.

It can work fully electrically on any type of construction site and for an unlimited period of time. This is because, like Sennebogen’s battery-powered material handler 817 Electro Battery already on the market, the crane can be operated both in battery-only mode and while charging from the mains. As soon as the machine is connected to the mains, the mains power is used for lifting activities and any excess power fed into the system simultaneously recharges the batteries. It is therefore zero-emission and fossil-fuel free (assuming your electricity source is sustainable).

The machine not only helps save the planet, it is also quieter than its diesel-powered counterparts and operates with less vibration. Electric motors have the added benefit of greatly reducing service requirements: maintenance procedures such as engine oil changes are completely eliminated.

Also on show at Bauma will be a smaller electric crawler, of 6t capacity, the CC 1485 from Maeda. It is powered by an electric drive made by Deutz; Maeda have produced electric spider-cranes before now, but this is their first cooperation with Deutz. The German company is a pioneer of carbon-neutral drive systems for off-highway applications and is steadily expanding its range. The CC 1485 is a small teleboom pick-and- carry with a 360-volt drive powered by a 40 kW lithium-ion battery. Full production is expected to begin in 2023.

Tadano produces both teleboom and lattice boom crawler cranes, in several different capacities. Over the years the nomenclature and model numbers of these has become somewhat idiosyncratic; units produced in the US bore names different to those of identical units produced elsewhere. Last autumn (2021) Tadano moved to rectify this for its latticeboom crawlers; this summer it has announced similar harmonisation for its telebooms. Models sold on the American market will keep their existing names and numbering; those sold elsewhere will change to the US nomenclature. Thus the Tadano GTC-350EX will be called the GTC-350; the GTC-500EX becomes the GTC-500, and the GTC-600EX will become GTC- 700. The changes will come into effect later this year, though the company’s newest model, the 156 tonne capacity GTC-1800EX telescopic boom crawler, which was introduced in November 2020 and is built in Zweibrücken gets its new name with immediate effect. It is now, officially, the GTC-2000.

Tadano explain this exception as based on an upgrading of the crane to the 200-tonne class: “Customers kept telling us that their experience in the field showed that in several configurations, the GTC-1800EX had a performance potential that far exceeded its [180t] class,” said product manager Vincent Stenger. “Therefore, we are renaming the model to the GTC-2000 for all markets to better align the name with the crane’s lifting capacities.”

For existing GTC-1800EX models in the field, Tadano will offer customers a kit to upgrade these cranes to the GTC-2000. The upgrade does not require any structural changes, but it does require a software change, with new load charts for a fixed position with no slew, and one for up to 180 degrees slew. It also includes new crane documentation, manuals, decals and nameplate. Tadano plans to exhibit the GTC-2000 telescopic boom crawler crane at Bauma 2022 this October.

One frequent application for the GTC-1800EX, or the GTC- 2000, (or even the Demag TTC 160 as the machine was actually originally named back in 2019 when it was first designed and produced by Demag before that company merged with Tadano), is on windfarms. Crawlers generally are in high demand for this ever-growing application. The reasons are not hard to find. High capacity and high boom and under-the-hook heights comes near the top of the list, with manoeverability not far behind.

For example, wind power is an application that Sany suggest for its largest telecrawler, the SCC1300TB. Introduced in June 2020, the 130t-capacity machine has a 60 metre boom in six sections with an 18.1 metre fixed jib; its maximum load moment is 4,800 kN-m. Pick and carry capability, says Sany, is 50 per cent higher than comparable lattice boom crawlers.

Dwarfing machines such as that, but still mounted on crawler tracks, is Liebherr’s new 2,500t capacity LR 12500-1.0 lattice crawler. Positioned between its 1,350 tonne LR 11350 and the LR 13000, which has a lifting capacity of 3,000 tonnes, it was introduced in April of this year (2022) with the slogan ‘Game Changer for tomorrow’s energy’ – which fairly clearly states its intended applications.

The first example has been delivered to Sarens, and the primary use for the machine will be, as Liebherr expected and designed for, on wind farms, though in this case handling transport and shipment of offshore components for them. Offshore turbines and towers of course are larger and heavier than their on-shore cousins.

Liebherr and its customers believe there is a great is a deal of potential in this class and a growing market for these larger crawler cranes. “Handling enormous components for offshore wind turbines at ports, in particular, has become an important area of work for large crawler cranes,” says Liebherr, “and part weights are increasing all the time.”

Such large capacities call for specialised design – in which respect the LR 12500-1.0 is a new departure. The key to high lifting capacities are wide lattice booms, Liebherr adds.

Solutions to date have been a double boom like the PowerBoom or the widespread SX systems. However, the Liebherr designers chose a completely different path for the LR 12500-1.0: The wide, powerful HighPerformanceBoom is introduced into the turntable in an optimised way, Liebherr explains. This is made possible by a special superstructure front section, which is transported on a low-bed trailer at a width of four metres.

The slewing platform is supplemented by a 3.5 metre wide rear section. Two Liebherr six-cylinder in-line engines deliver a total of 800 kW. They have a redundant design to increase the crane's availability.

The intermediate sections of the HighPerfomanceBoom each measure 10 metres in length and are reduced to an economical transport size by a special integrated mechanism. The chain is removed and placed in containers for transporting the crawler carriers, each of which weigh around 150 tonnes. The remaining chain girder is divided and moved on two low loaders.

The LR 12500-1.0 is designed for a transport width of 3.5 metres. Only two components of the new 2,500 tonne crane have a transport width of four metres. A 100 metre main boom and a 108 metre luffing jib give it a maximum hook height of around 200 metres. “The new 2,500 tonne crawler crane has also been designed to cover future requirements,” says Liebherr. “Interest in it is correspondingly high.”

Which Sarens confirms. “The high lifting capacity of the LR 12500-1.0 is the outstanding feature for us,” said managing director Carl Sarens. “We are particularly focussing on jobs in renewables for it. Handling offshore wind turbines at ports is also becoming a much more important business segment and the weights of components continues to rise.”

Lattice crawlers do not have a monopoly on windfarm work: telescopic crawlers are there as well, sometimes as assists. Wilkerson Crane Rental of Kansas City, Kansas purchased three Link- Belt telescopic crawler cranes, a 250-ton (235-tonne) TCC-2500, and two 140-ton (127-tonne) TCC-1400s for a 69-turbine wind project near Joplin, Missouri, and then obtained two more of the 1400s.

“The TCCs can walk down a dirt road on tracks, or across rough fields and suck in the boom for easy travel," said Larry Smith, Wilkersons sales and estimating manager. “They can get around so well while they are picking and carrying. They are so agile, almost perfect for the work they’re doing out here. You couldn’t ask for a better crane, really. All three Link-Belt telecrawlers are nimble enough to assemble larger 715- ton lattice crawlers onsite, and to unload turbine components off transport trucks for eventual assembly. The TCC crane operators are usually working in a 35 to 40 ft. (10.6 – 12.1 m) radius, although working up to a 100 ft. (30.4 m) radius is common. Crane boom configuration can be from 85 – 105 ft. (25.9 – 32 m) out or more; the boom angle varies with the space available and placement with changing load weights.”

Of course, windfarms are far from the sole application of crawlers. Almost any infrastructure project sees them at work. We have mentioned HS2; Florida’s Howard Franklin Bridge – see box – is another example of massed crawlers at work. As long as civil engineering happens, there will be a place for the king crawler. 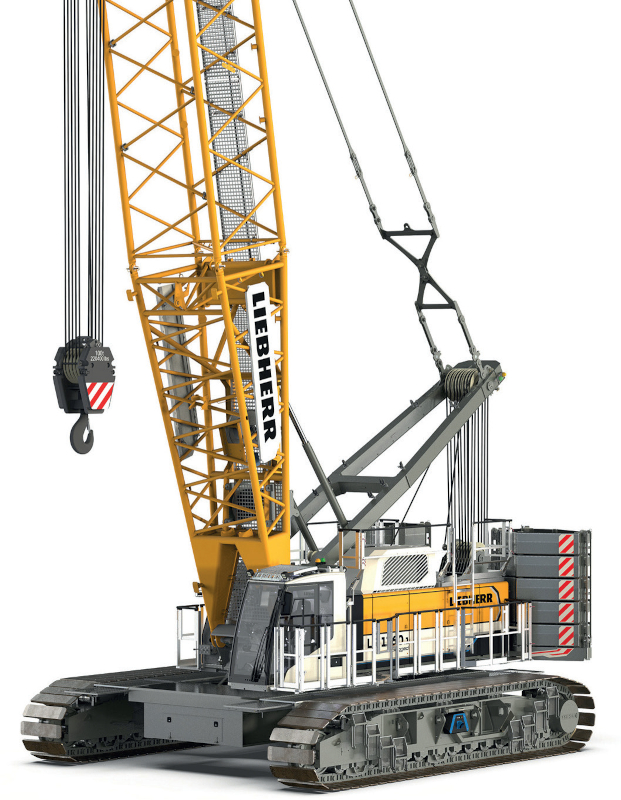 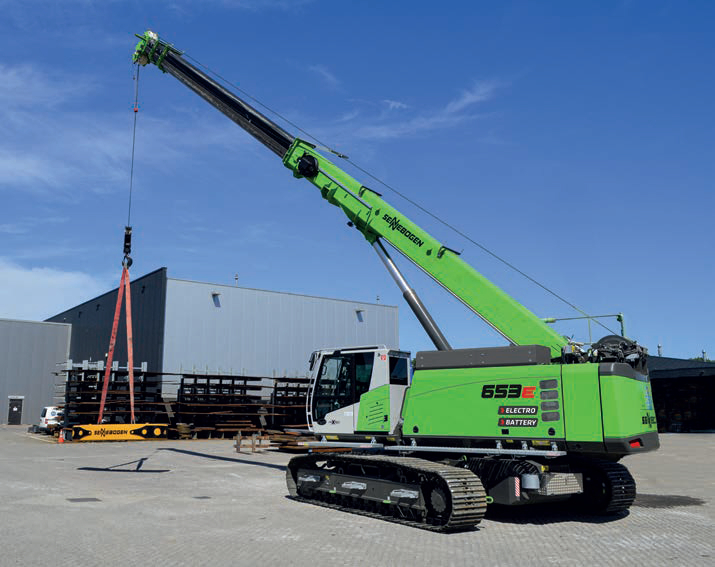 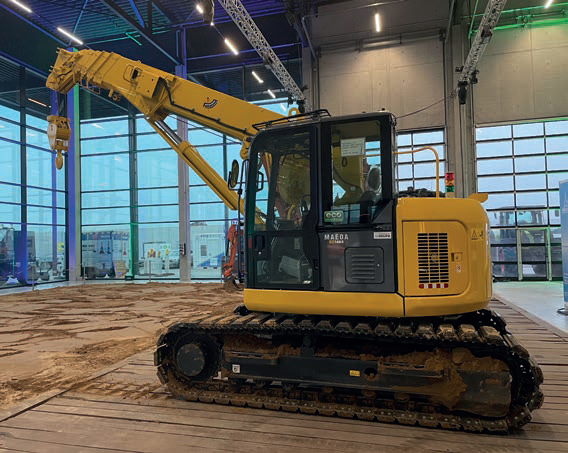 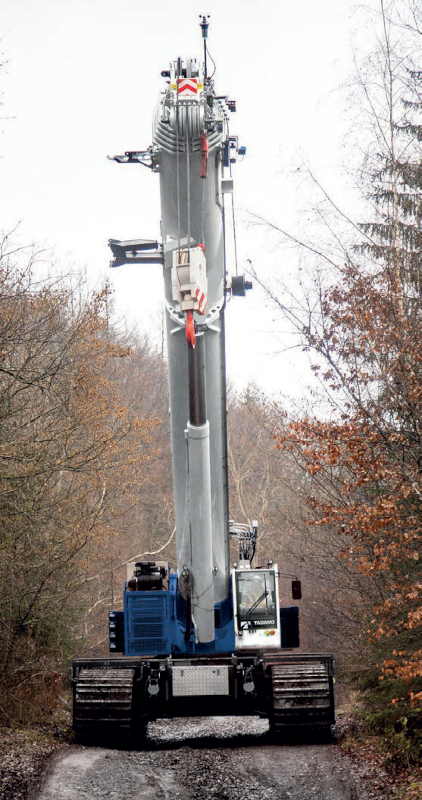 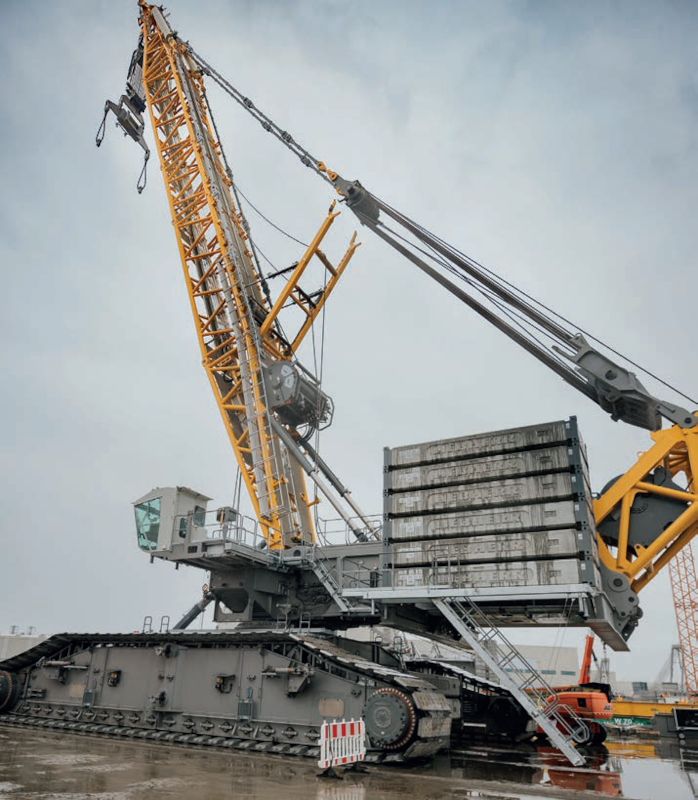 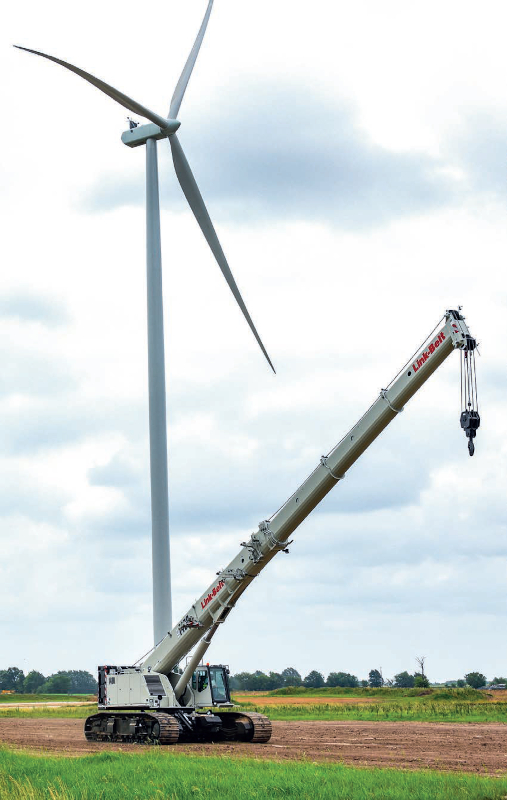 Linkbelt’s TTC 1400 on a Kansas windfarm