Demand for cranes and lifting in the Middle East is growing. Malcolm Kirby is managing director of Johnson Arabia, based in UAE. “The construction equipment market in the GCC will be valued at $US 3722.2 million and reach a volume of 99,829 units by 2027, according to a study from ResearchAndMarkets.com,” he says. “They estimate a compound annual growth rate of 7.34% by volume between 2021-2027. So basically, the projection is that demand will increase.

“That is especially the case now that the Middle Eastern countries are diversifying their economy from relying solely on oil; sectors they are promoting and investing in range from tourism to real estate. For example, Saudi is working on hotels and infrastructure to bring tourism to the pre-Islamic ancient walled city of A’Ula, which has the potential to become one of the most important archaeological tourist destinations in the world.” An international airport has opened to serve it, hotels are being built, and local people are being trained as guides. “They have NEOM as well.” NEOM is a new $500bn city on the Gulf of Aqaba which is intended to be the first ‘cognitive and smart’ (i.e served and operated by digital technologies) city in the region and to be powered solely by renewable wind and solar resources.

“The UAE is not far behind,” says Kirby, “with massive projects like the Abrahamic centre, which is intended to promote understanding between the Abrahamic religions of Islam, Christianity and Judaism and which will make UAE inviting for more visitors as being actively inclusive of all cultures. Another huge UAE project is the clean energy initiative to reduce its energy footprint by 70% by 2050. All existing plants and energy sources will need to be overhauled and new green (i.e non-fossil-fuel sourced) hydrogen and solar plants will need to be set up. All these will create a greater demand for lifting. Our presence will be seen in all these regions.”

Are different countries recovering from the economic effects of the pandemic at similar speeds? “Saudi Arabia, Oman, Qatar and UAE have bounced back quickly,” says Kirby. “The smaller neighbouring countries are also working on this with very positive outlooks. The type of lifting gear being hired is more or less the same throughout the Gulf states. Type of project is what drives it, so for a few months we may see more utilisation of cranes and then perhaps more aerial work platforms in use. It depends on the projects we are hired out to do.”

And, at the edge of the region, Egypt has just announced that it is bidding to host the 2036 Olympic games. The IOC [International Olympic Committee] is thought to be favouring an African or Arab-world venue, and a successful bid would be a massive boost for the construction industry. As demonstrated by Qatar, where tens of billions of dollars were spent on infrastructure in preparation for the 2022 World Cup.

As well as a first for Africa, an Egyptian Olympics would be a first for the Arab world and the broader Middle East.

“Construction in Egypt is already booming. It was the best-performing market for contract awards across the Middle East and North Africa in 2021, according to GlobalData’s MEED (Middle East business intelligence) Projects. “We recorded $14 billion of construction and transport contract awards last year, up from $10 billion the previous year says Colin Foreman, deputy editor at MEED. (Disclosure: data and analytics company GlobalData also owns this magazine.)

Tony Nuyts is Middle East Business Unit Manager of Aertssen Machinery Services (AMS). “The Covid-19 pandemic hindered the growth of the construction machinery and equipment market across the GCC region, putting many projects on hold and cancelling others,” he says. “On the other hand there are numerous projects to be awarded which have already been announced, especially in the UAE; some economic activities have resumed, and the demand for renting construction machinery is likely to pick up due to the diversification of the region: transportation infrastructure, rail routes, highways, hotels, buildings, stadiums are all part of this.

“Demand for cranes is increasing for infrastructural projects related to road and highway networks, especially in Saudi Arabia’s and UAE’s upgrading transportation system – Etihad Rail for instance. These two important countries have made significant steps in general construction projects since their governments’ focus on Saudi Vision 2030, UAE Vision 2021 and Dubai Expo 2021.”

The huge and prestige projects for which the region is known are continuing. Some in which AMS has been involved include: The Louvre Museum Abu Dhabi – in contributing to erect the unique dome – where Aertssen’s crawler cranes were used in complex configurations working at high radii; Ain Dubai, also known as the Dubai Eye, which is the world’s tallest panoramic wheel; and the beautification of Corniche, Qatar, where AMS contributed to the construction and renovation of several stadiums as part of the infrastructure renovation for the 2022 World Cup.

“And we have been part of the construction of the new Muscat Airport by lifting heavy trusses in complex dual lifts,” added Nuyts.

A major strategic investment for the Sultanate of Oman is the Port of Duqm development. This is part of the ambitious SEZAD (Special Economic Zone of Authority at Duqm) project, which will be Oman’s next industrial centre. SEZAD also includes a refinery to process 230,000 barrels a day, and the expansion of what was until recently a small fishing village to become a city of 250,000 by 2040. The new deep-water port facing the Arabian Sea and the Indian Ocean is intended to become one of the largest ports in the region handling the world’s largest container vessels. Liebherr, Aertssen, Hareket and Mammoet are just some of the lifting companies involved in the project. In November 2021 Liebherr won a contract to supply it with four ship-to-shore container cranes and 12 rubber tyre gantry cranes. The cabinless cranes will be operated by automation and remote control. A high speed near-zero-latency mesh network will give remote control of the diesel-powered gantry cranes.

A new fishing harbour has been constructed, for which Aertssen placed concrete blocks for the 3.4km breakwaters. The work was completed in October 2021. At the Duqm refinery, Turkish lifting company Hareket has been given the heavy-lift contract for the offsite and utility packages. In April they installed 13 flare stack modules for the project, the heaviest of them weighing 220 tonnes and measuring 30m x 26m x 21m. Hareket used a 1,250t capacity Demag CC6800 and an 80t capacity CC280-1 crawler for the lifts.

Mammoet also has contracts crucial to the Duqm refinery, for receiving and transport of bullet tanks and reactors. Each of nine 780 t bullet tanks, fabricated at a local facility in Sohar and measuring 72m long by 11m high by 8m wide, was loaded-out by 44 axle lines of SPMT onto a barge in Sohar. On arrival at the Port of Duqm the bullets were loaded-in, staged, and transported 25km to the refinery site, where they were positioned onto their foundations by 1,600t and 1,250t capacity crawler cranes working in tandem.

Mammoet also handled a 1,130t reactor, 33m long, 8.7m wide and 7.3m high, which was the heaviest cargo ever loaded-in at the Port of Duqm. This was delivered using 54 axle lines of SPMT. Mammoet also has ten hydraulic cranes and three crawler cranes at the refinery to support other subcontractors on site.

The future, then, looks busy and anything but stagnant. To cope with the increasing workload, crane companies throughout the region have been acquiring equipment. Johnson Arabia, for example, has recently expanded its fleet, buying a 150 tonne capacity Grove GMK 5150L crane and two 100 tonne Grove GRT 8100 Js. “They are already on site on the oil fields,” says Kirby. “They are perfect for those conditions and size-wise they are also good for the area.”

And, to show that not all lifting in the region is high-capacity, they have used two of their six Maeda mini-cranes, acquired in 2020, to install windows in Dubai’s Four Seasons Hotel.

In November 2021 Aertssen UAE ordered eleven Tadano rough-terrain cranes, seven of them type GR-145-EX units and the remaining four GR-500EXL. The GR-500EXL cranes have already been handed over. The GR-1450EX units will be delivered later this year.

High lifting capacities with compact dimensions designed for economical transport were given to be the main criteria behind the purchase.

Crane and services specialists Sparrows also recently announced significant investment in its Middle East facilities; it has increased both its footprint and its headcount in Abu Dhabi. Stewart Mitchell, CEO at Sparrows, described it as “a significantly larger operational base.” The decision to expand was in part due to a clear demand and uptick of drilling activity in the region; around 20% of the company’s ongoing work is drilling related. The company has been operating in Abu Dhabi for over 20 years and employs approximately 400 people in-country. It also has facilities in Saudi Arabia and Qatar.

Sparrows is pleased that its Abu Dhabi facility has just been awarded, in January (2022) ,the American Petroleum Institute Q2 stamp of industry approval.

The quality assurance certificate is the leading standard for drilling service providers in the offshore energy sector. Sparrows is the first international company to receive the second edition certification.

Turkish lifting specialists Hareket has also opened a new office in the region, in Oman. It is dedicated to managing its lifting work on the Duqm project – see box – and to widening its range of activities in engineered heavy lift and transportation, and crane rental services.

The large – rather, huge – prestige projects that have been emblematic of the region show little sign of slowing. “In 2020 and 2021 we were involved in the Expo 2020 and now that this is coming to an end we are very excited to see how this will be developed further into a district of its own and how we will be a part of it,” says Johnson Arabia’s Kirby.

“There have already been some major projects like hospitals and residential developments that we have been a part of.”

Some other major projects are described in the boxes. Diversification from oil is a hopeful sign, globally and regionally; and the world centre of the fossil-fuel economy is showing some indication at least of being aware of renewables, such as hydrogen and solar, as an energy source.

Crane companies have noted these things and are currently planning accordingly. 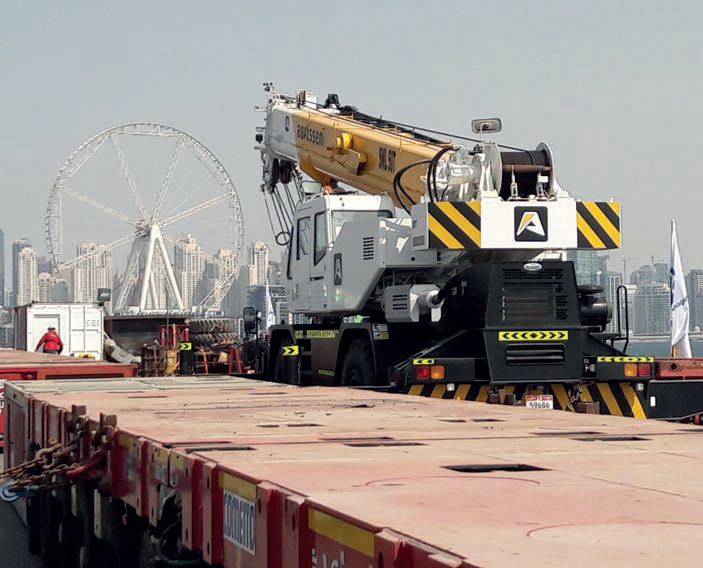 ... And Aertssen works in front of the Dubai Eye 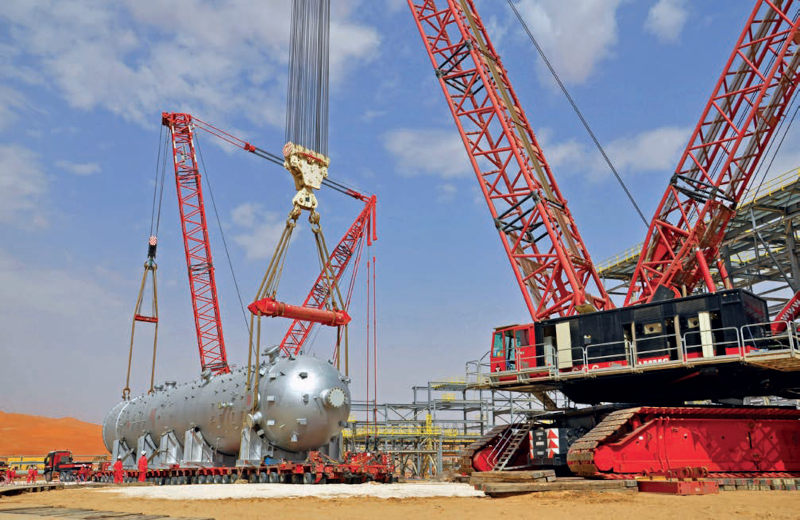 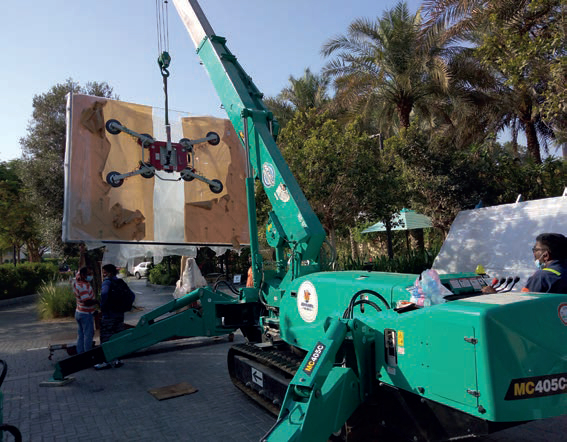 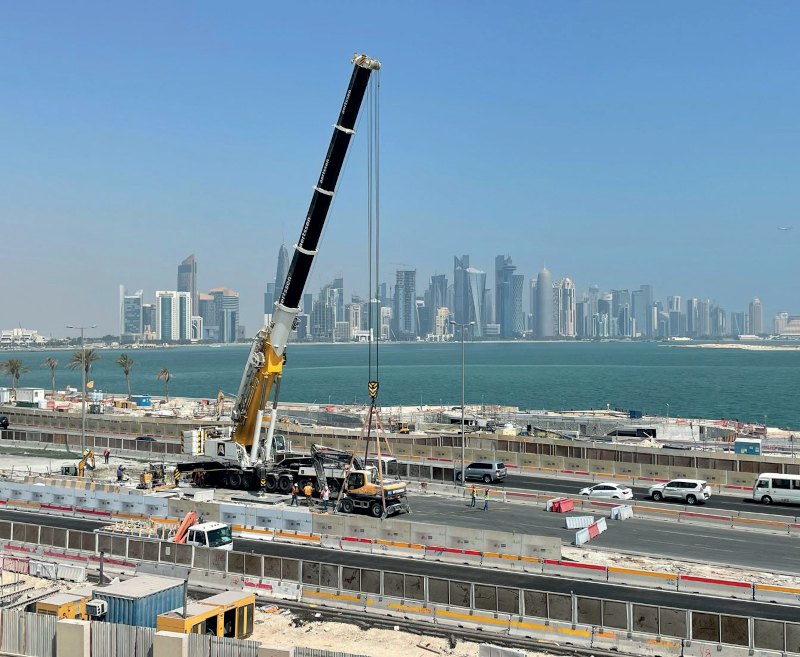 Aertssen works on the Qatar waterfront...