The specialised nature of mini-cranes means they are increasingly being used in place of other, larger crane types. Julian Champkin reports.

Mini-cranes are getting simpler. They are also getting more complicated. The simpler part is outside: they are easier than ever to operate, even by a compete beginner. The complicated part is generally inside and does not show. It is there to make the outside and everything else simpler for that operator, whether experienced or complete beginner.

Consider the new SPX 328 from Jekko. “It is very easy to use it,” says Alberto Franceschini, Jekko’s sales & marketing director, speaking at the Bauma trade show in October where the crane was on show. “That makes it good for rental, good for a small building concern, good for everything in fact.” We can go further: “But behind that there is something more philosophical,” he says.

“Mini-cranes are still a small market, almost a niche market, compared to say all-terrain cranes or other types. We are simply doing what other industries have done in the early days of their adoption.

“I don't know if you like computers, but I do; and when those were new on the market, not so long ago really, if you wanted to use a computer you have to write your own code. You had to know a programming language like C++. Right now, of course, you don’t need to know any of that to use a computer: you just switch on your laptop and Word appears and you can start typing. Very few users know what goes on inside their laptop or tablet; they don’t need to know and they don’t want to know. And that’s how we want it to be with our mini-cranes. We just want to make them absolutely intuitive to use. Press ‘up’ and the hook goes up; press ‘down’ and the hook goes down.”

To make that happen you need high technology within the crane. “This is absolutely our most complicated crane design,” he says of the SPX328, “and the high technology is there in order to make the crane simple to use.”

Simplicity meets the user at the touchscreen, and Jekko is really very proud of it.

“It guides the operator step by step to set the parameters of his experience; it is the quintessence of the user-friendly concept,” Franceschini says.

Physically, it is a 10” interactive touchscreen which has an IP67 Protection Rating for operation in any yard and in any weather conditions under the sun, from low to high temperatures and even in snow; the operator can use it wearing work gloves.

The software is Jekko’s own. It requires minimum training; it guides the operator through the different working phases, streamlining the processes and turning even the most difficult operation into something easy to perform. From stabilization to operation, the craneman is easily steered throughout his work.

“Turn it on and it gives you an overview of the crane. You can see if it's unbalanced; it tells you if the remote control is operating or is disconnected; you have all the data. And then you get the live flow chart. It is updated in real time, shows you the angles of your jib and boom, the metres on your jib, the capacity you have and what is the maximum capacity that you can lift in that orientation. If you overload the system it tells you and will stop the crane, but it will always let you move the load back to a safe area. The control levers on the remote are proportional, like the gas pedal on your car: if you push more it goes faster, if you push less it slows down – but it accelerates and slows smoothly, with no jerking. So everything is intuitive and self-explanatory.

“This is the major element of the SPX328: it is designed and developed for both entry-level operators and skilled users,” says Franceschini. “It is a trend in the market, and Jekko simply anticipated that trend. And this basic philosophy is going to be extended to all the other cranes in our range. That is our market projection for the next five years.” And after that? “Seeing five years into the future is all we can claim to do...”

There are other aspects of the SPX328 that would normally have got mentions earlier. Its capacity is 2800kg. While some other makers of mini-cranes have gone for larger capacities and so larger cranes Jekko is keeping dimensions small: at 73cm wide it can still fit through a standard doorway. Jekko claim it as the first mini-crane in the world to be equipped with an electric jib; the normal hydraulic cylinders have been replaced by electric actuators powered by a lithium battery housed on the main boom. One advantage is reduced weight. The crane is battery driven, but can still be operated while on mains cable charge.

Jekko is based in Treviso, about 60 km north of Venice. Northern Italy has long been a powerhouse for small cranes. Galizia has been building mini pick and carry cranes at its plant near Asti in Piedmont for more than 30 years, priding itself on innovation: back in 2007 on its GF200 it introduced a front drive system with a separate independent motor powering each of the front wheels, giving extreme manoeuvrability with full radio remote control.

It followed it in 2016 with the four-wheel rear axle and two fifth-wheel system of the GF600 to improve ground pressure distribution and side stability. The GF420, one of its latest models, is a 42t battery powered pick-and-carry with a four-section main boom, 180-degree rear steer, and a chassis that can extend by a metre to give greater moment to the counterweight. The boom nose can pivot from plus 90° to minus 30° degrees for lifting in low head room environments.

Not far away, and also at the foot of the Alps, JMG has just completed a brand-new production plant at Sarmato in Emilio- Romagna, ‘an area’ as they put it, ‘where the new citadel of electric cranes is taking shape.’

The very first machine rolled off the line there on October 1st. It was an MC100S, a radio-controlled walk-beside 10t crane on four rubber tyres; the front wheels have counter-rotation designed to give extreme manoeuvrability.

Moving north and out of Italy, Hoeflon, based in Barnveld in The Netherlands, have electrified one of its strongest mini-cranes, which in its original diesel incarnation is known as the C10.

It lifts up to four tonnes, despite the fact that its own self-weight is just five tonnes, and it, too, at 80 cm wide, is slim enough to fit through a standard single door.

Radio-controlled, mounted on non-marking adjustable rubber tracks, the telescopic boom gives an outreach of 19.8m and lifting height of 22m; the electric-powered version is known as the C10e and means that the entire Hoeflon range, from the 600kg C1e to the nine-tonne C30e, is now lithium-battery powered.

Electricity, of course, is the coming thing – or now the arrived thing – for cranes both large and small. Andy Crane, UK sales director of Kranlyft, was exhibiting a new model in Maeda’s eco range at Bauma this October. It is called the MK3O53-C.

“It is available in three options,” he says: “diesel, diesel-electric or battery. It is on crawlers, with extendable tracks just for extra stability for when you drive it around .

“It has fully stepless outriggers, all hydraulically powered: they fold out and they extend and lock via the remote control. There is no manual pinning of outriggers or anything on the machine: everything locks itself.”

A key selling point is its reach: “Reach and height are what many customers want these days, and the MK3O53-C has a lifting high of just under 70 metres, 16.95 metres to be exact. That is a lot for the size of the machine, which is only 780cm wide when it's folded. And that long reach fills what has been a gap in our range. We can really supply now the whole range of mini-crane reach requirements from smallest to biggest. That's going to give people so many more options on the smaller machines.”

Andy Crane is proud of the machine’s robustness. “Our cranes have always being known for their build quality and reliability. When you look at the size of the boom sections, the boom on our fly-jib is really substantial; it is about the size of the main boom sections of some of our competitors’. And that, of course, increases capacity as well as ruggedness. I don’t think we get beaten on any of the important parameters.”

The model on show at Bauma was a prototype. “Even so there has been huge interest. Everyone stops to look. We have sold five at the show, even though the release date is July 2023, and we have many more potential sales that will be finalised soon.

“The first advance order was placed by Hird, and once they saw the final specification they increased their order to two. The next order was placed by a Leicester-based company and there are a couple of others from regular customers confirmed as well.”

One reason for the interest is the expanding inroads minis are making into sectors more usually thought of as the preserve of other, bigger, types such as tower cranes.

Dan Ezzatvar of GGR – gave us his views: “I wouldn’t pick on tower cranes alone” he says. “Mini-cranes can operate in a way that is a lot more specialised than some of the big-crane people realise. Not so long ago there were many hard-to-reach areas on a construction site. You might have men taking the roof off a building, or needing a load lifted into a building or completely over a building to a courtyard. Minicranes can get into those hard-to-reach areas.

“And rather than bring out a 60t crane to do a small lift, with a mini-crane you’ve got the option of going over a building or through a door. The market has become more aware and more educated as to the capability of these machines.

“At Bauma I had guys from the Middle East say to me ‘Look, the customers are more savvy now. They don't want to pay for an expensive extra crane just for one or two exceptional lifts on a site.’ We have to find a compromise to run alongside traditional cranes to give customers a solution. GGR has built a business around the mini crawler crane for restricted access, environments that are enclosed or up steps or hard to reach. And that takes us into sectors where once you would have needed a much bigger specialist crane like a tower or an all-terrain.”

“The mini market generally is booming,” says Kanlyft’s Andy Crane. “People are getting to grips in realising how useful these machines are. One application is general building sites; and obviously with the fully battery-operated eco-machines mini-cranes can work indoors, on things like glazing. We have just hired one of our Maeda 285 mini spider cranes to a company who is erecting Christmas trees all over the place. With this machine they can now be doing bigger Christmas trees...” 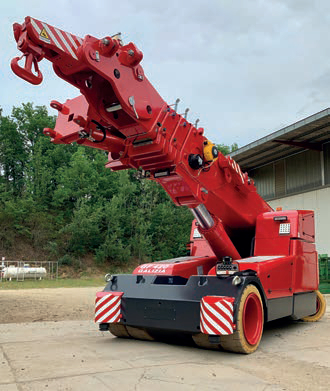 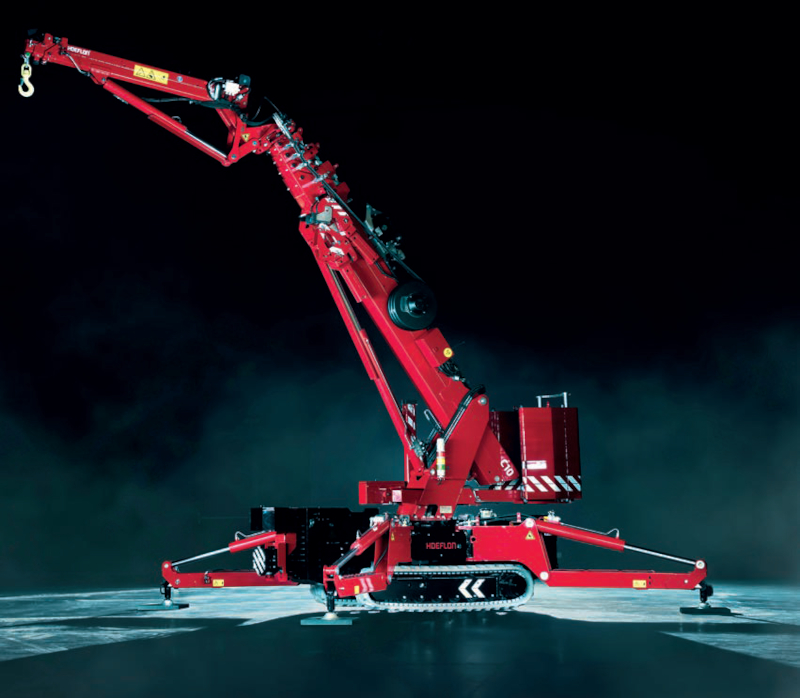 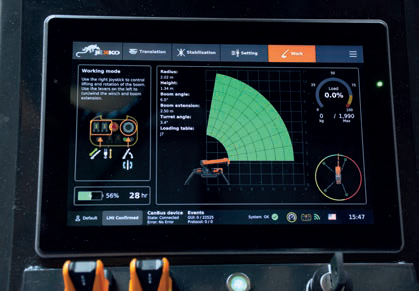 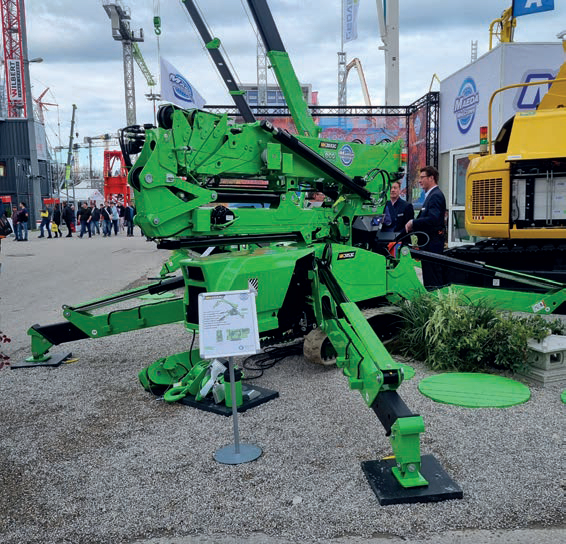 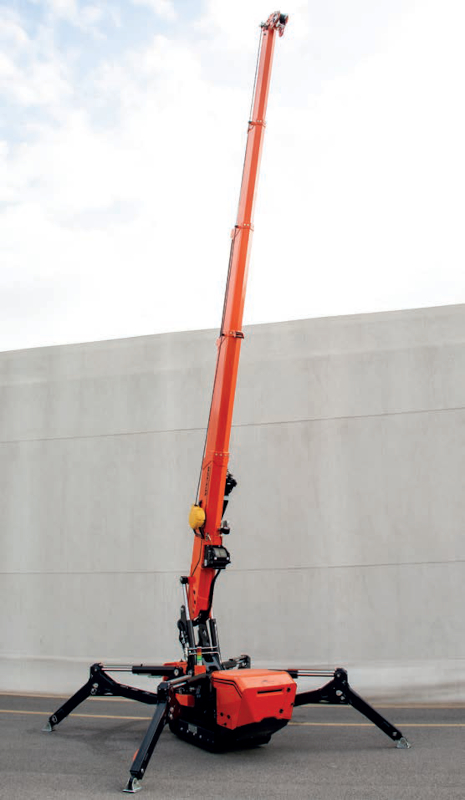