Jack up systems and strand jacks offer a powerful way to lift huge loads, yet are often easier to deploy than large cranes. Rhian Owen looks at recent projects that demonstrate the flexibility of these systems, and considers their limits and potential.

High capacity lifting systems are being developed to jack up ever increasing loads. Five years ago, ALE launched its Mega Jack, which was developed to meet the increasing demand in the offshore industry to jack up larger and heavier oil and gas platform modules and other large structures. Three years later, the company announced its new 'innovation' series brand with the launch of the Mega Jack 800, designed to provide jacking solutions for a range of industry sectors including civil, mining, power generation and offshore.

The Mega Jack 800 is made up of jacking towers, each with a capacity of 800t. It is containerised, can be built at ground level and utilises a low assembly height for installation. Multiple towers can be combined with a starter beam to create 1600t and 2400t capacity per jacking point.

Enerpac's jack up systems works in a similar way: four legs are positioned under each corner of a load.

A load is lifted in increments as boxes are slid into the system, lifted, and stacked; forming 'lifting towers'. A four unit setup has a lifting capacity of 2,000t (500t per unit).

"So far we have lifted up to 5,000t, but I can see that we can go higher and lower than what we have currently made and offered," says Jeroen Naalden, global director of Enerpac Integrated Solutions. "We are currently working on different models with 100t per leg, so 400t combined, and that's approximately how low we would go, and then we can go higher. However, then the question becomes about square meter pressure - are you able to do that with four legs or are you going to use six legs, or eight legs, of a single system? That all depends on the parameter and the width that our customers are working with."

"The challenges are mainly with the control system," says Naalden. "With JS500 we have the power pack on the outside of the legs, what we've now done [with EP5000] is developed it with self contained hydraulics, which means that all the hydraulics are included in the base frame. Generally it is a challenge to do that, but it giving a lot of safety and efficiency features in terms of mobilisation to our customers.

Hoses aren't needed here, so there will be no hoses flying around the workplace. You have one power cable from the control system to the legs and that's all you have lying around."

One of the key benefits of a jack up system is the ability to work from the ground up. "The biggest benefit of a jacking system is that structures can typically be built up near ground level. So actual working hours spent at height are minimised.

Also time of workers climbing up and down is reduced greatly. Another benefit is that smaller cranes can be applied for the job as well.

When finished, the structure can be brought to its final height. Depending on the size, ALE has a solution," says Harrie Smetsers, research and development manager, ALE. Late last year, ALE used its Mega Jack 800 to jack up a 2,000t living quarters module in Norway.

The contract was awarded to ALE by Apply Leirvik. The first 1,000t module was jacked up in July 2015 and also involved using 72 axle lines of self propelled modular transporter (SPMT).

The living quarter module was for the Gina Krog topside, a minor gas discovery just north of Sleipne, which has been considered for development on a number of occasions since it was discovered in 1974. It was the second module jacked up by ALE. The living quarter was jacked to a height of approximately 12m to allow for the integration of the lower transport grillage.

"The main design goals were that it should fit under very low structures, so we have a minimum build height, " says Smetsers. "What's more, the installation time with the Mega Jack 800 should be minimised and we can start jacking quickly. If the loads are going to be high and the foundations aren't very good then we have to grout it, and that takes an additional two to three days before the ground is secured, but normally jacking up, building up and removal of our equipment is a week to two week job.

This was a typical use of a jack up system, says Smetsers. "The typical jobs for jacking up heavy structures include bridges, topsides, living quarters as well as container terminals and there's a lot of crane enlargements jobs as well."

Harbour cranes around the world need to be increased in height, making this a trend expected to dominate jack up projects. The growth of large vessels in the container industry has affected the Asia-Europe routes especially. According to the World Shipping Council, the trade group representing the international liner shipping industry, the largest container ships (18,000 TEU plus) are deployed only in the Asia-Europe trade. For example, the vessels in Maersk Line´s Asia-Europe AE10 service increased from 8,500 TEU vessels in the second half of 2010 to 18,000 TEU in August 2013.

The vessels in Maersk's TP6 Trans Pacific service increased from 8,600 TEU to 9,400 TEU. Ships with a capacity of 8,000 plus TEU have called US ports for a number of years. More recently, container ships of roughly 12,000 to 14,000 TEU size have begun calling at California ports. This year, the new locks of the Panama Canal will allow container ships of up to 13,000 TEU pass through. When those locks open, there will be a strong incentive to replace current 'Panamax' ships transiting the canal with bigger vessels.

Using jack up systems to expand harbour cranes is not only financially beneficial, but it is also an efficient solution. Since jack up systems are very fast to market, compared with the highest capacity cranes, harbours are able to respond to this demand.
Strand jacks are similarly very effective in meeting tight deadlines, and can offer a flexible way to move large loads, from sections of bridges to entire oil rigs. A strand jack is a system similar to a jack, however the load is not pushed up, but the jack pulls up a bundle of wires, called a strand. "The functionality of one strand jack is like pulling a rope. In principle a strand jack is a hollow cylinder with a set of steel cables inside, each one passing through two clamps - one mounted to either end of the cylinder," says Erik Kroes, manager operations special devices, Mammoet.

"Strand jacks offer the ability to lift a heavy load within a compact system, making them ideal for confined sites. Our strand jacks are available in capacities up to 900 metric tons per jack. The good thing about the system is that you can expand the amount of strand jacks you use. At this point it is possible to connect up to 60 strand jacks in one system and operate them from one control point, with millimetre precision," Kroes adds.

The degree of control allowed by this computer system, and the ability to place strand jacks across a structure, ensures the stability, integrity and safety of the structure during the entire operation. An operation using cranes, for example a tandem lift, requires the synchronous collaboration of two or more crane operators, making it a much more complicated task.

Mammoet's strand jacks can be used in a wide variety of projects in which objects need to be moved up, down, sideways or at an angle. One of the most common applications of a strand jack is in combination with a gantry - gantries always rely on one or more strand jacks for the muscle power needed to lift a load. But strand jacks also have other applications.

They can, for example, be installed on client's structures, allowing them to lift heavy and oversized objects in situations where site configurations do not allow cranes or gantries to be used. They can also be used to pull loads sideways during load-outs and other skidding operations or to provide stability and tension like in Chernobyl, where Mammoet used a tailor-made strand jack system to support and lift an arch-shaped confinement structure for the destroyed nuclear reactor.

In late 2015 Mammoet announced the successful completion of the Coelacanth Project, where it helped assemble the third largest offshore jacket - the 'Walter jacket' - to operate in the Gulf of Mexico. Mammoet was contracted by Gulf Marine Fabricators to roll-up the jacket's massive panels and transport the jacket onto the barge that would deliver it to its final destination.

Traditionally, a jacket is constructed piece-by-piece until it is built up to its full height. This requires construction workers to carry out their tasks at height. An alternative method is to use prefabricated panels which are constructed at ground level and then put in place in a rollup operation carried out by cranes.

For the Walter jacket, with its large dimensions and heavy panels (118 meters high by 114 meters wide and 5,000 tons each), a large number of specialised heavy lifting cranes would have been required to perform the roll-up operation. But Gulf Marine Fabricators investigated the possibility of an alternative approach that would be more controlled. The manoeuver required each panel to be rolled up in a synchronous way, as any deflection might cause damage to the panels, or the entire structure. Working with Mammoet, they developed a method to do this using strand jacks.

Using the strand jack system, the panels were 'rolled' from a horizontal position to the required vertical placement. This roll-up procedure was carried out on two opposing panels at a time. A customised software system was developed to ensure a controlled and synchronous operation of the strand jacks. "The computer system completely monitors that aspect of the job," says Kroes. "Each jack is individually controlled by the computer system. The computer makes sure that the individual jack stays within certain limits compared to the others."

After the construction was finished, the 30,000t jacket was pulled by strand jacks 1,450 feet (442 meters) from the fabrication location to the barge. The transport took 59 continuous hours from beginning to end.

The traditional piece-by-piece building approach, used for large structures, stadiums or off-shore rigs, requires significant, specialist resources. Alternative construction techniques, such as modularisation, enable constructors to carry out construction in a more efficient way, where resources are readily available. With a growing trend in the heavy industries to use techniques such as modular or off-site construction, the use of strand jack equipment, with its flexible applicability, is increasing.

"Applications for strand jacks seem to be nearly endless," says Kroes. "With the fast changing world of modularisation, it is a key element of the installation of large and heavy constructions. We are seeing strand jacks used increasingly for manoeuvring prefabricated modules. While specifically the software-side of the equipment is continuously undergoing further development, the use and markets are also being explored further." 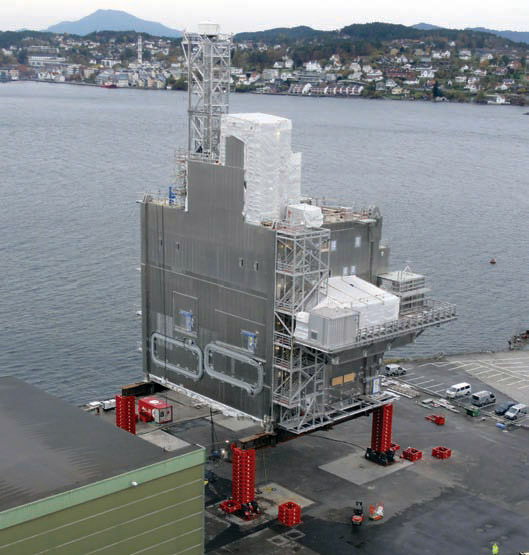 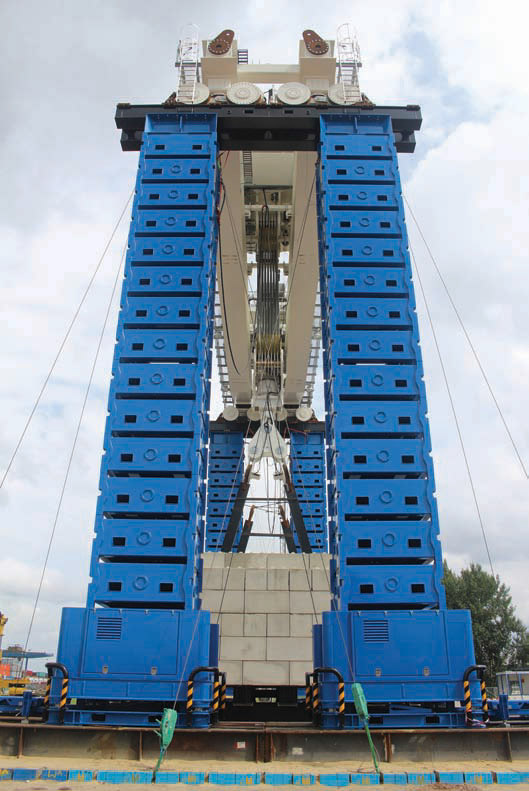 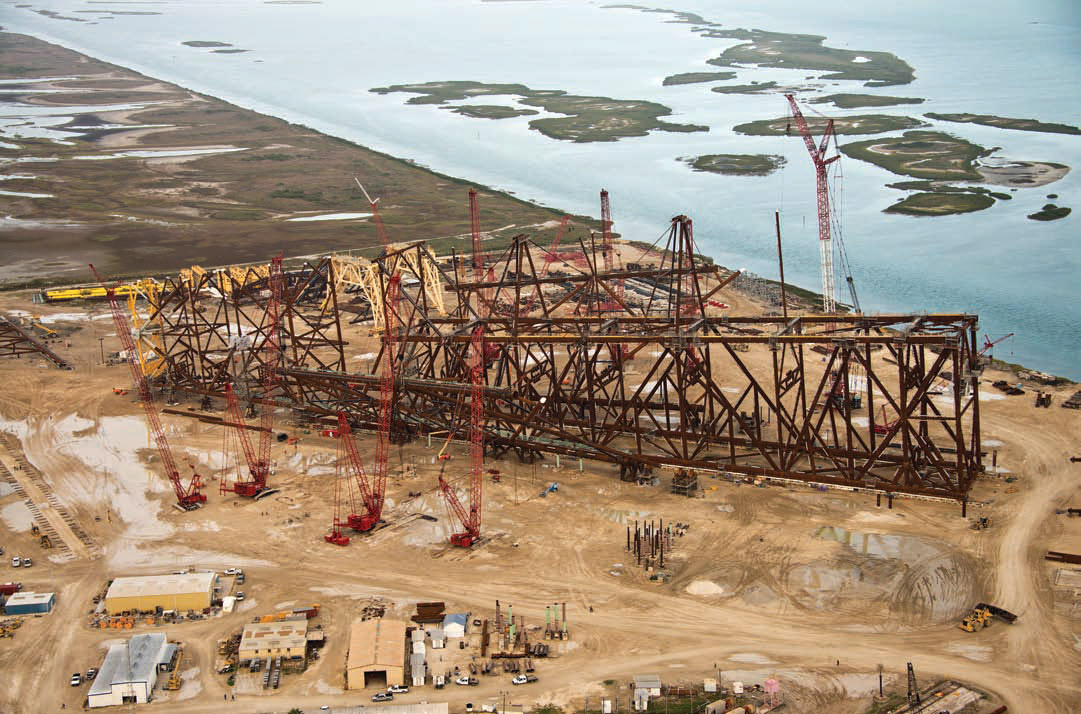 An overview of the Walter jacket on the Coelacanth project 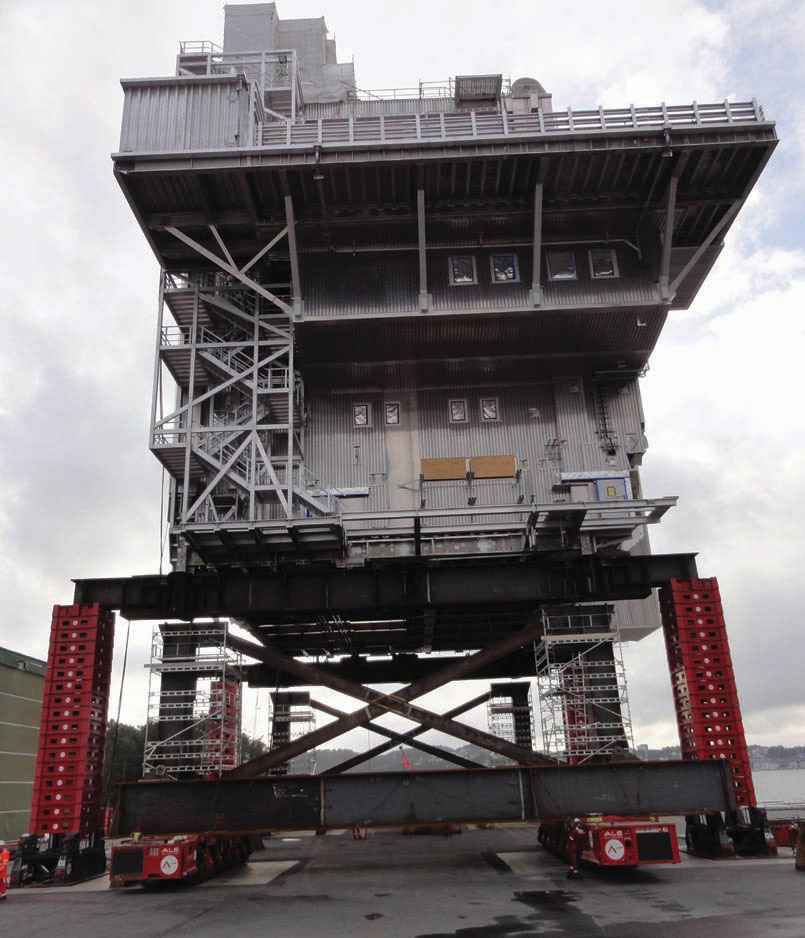 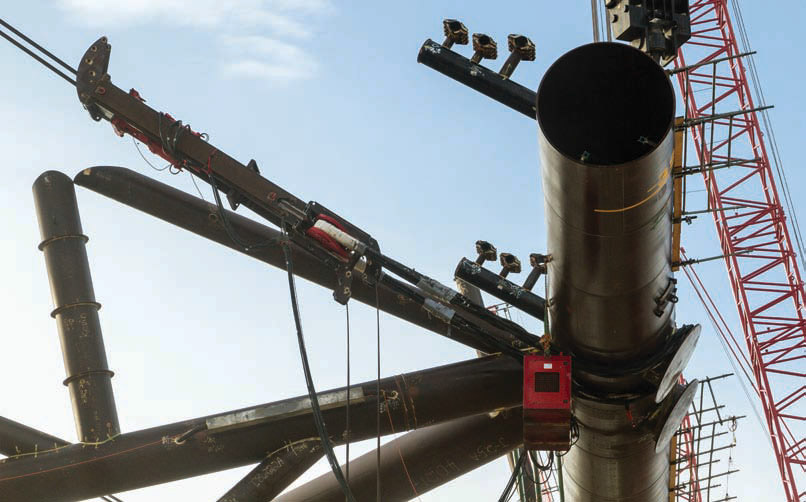 A Mammoet strand jack on the Walter jacket 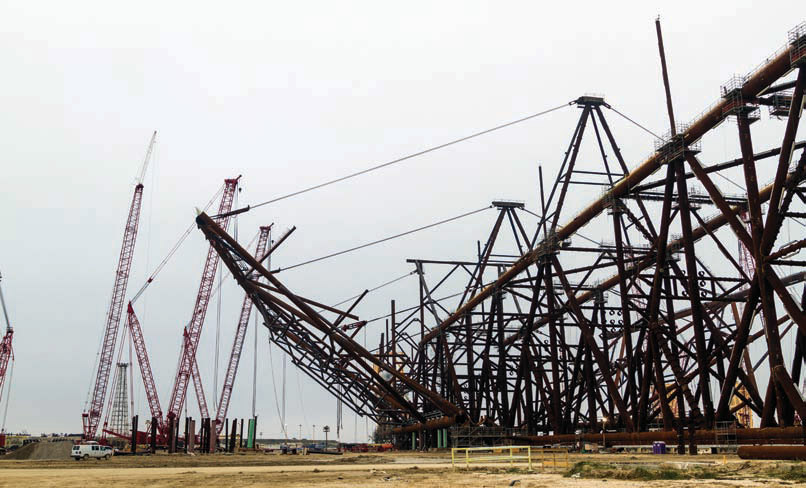 Raising one of the Walter jacket panels 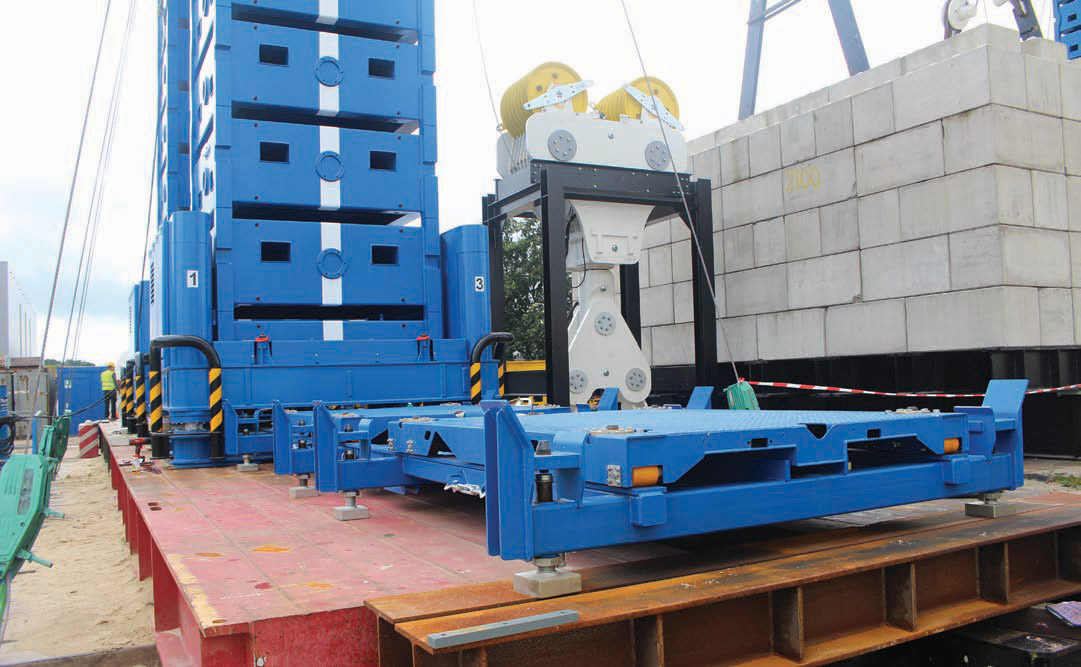 Preparing to test an Enerpac jack up system