Snow, steep gradients, and restricted set-up areas are just some of the challenges facing Prangl as it erects electricity pylons 1800 metres above sea level.

Austrian crane contractor Prangl is using a Liebherr LTM 1160-5.2 mobile crane as the primary crane in the erection of electricity pylons in the Austrian Alps. The pylons will carry the ‘Salzburg line’ – a high voltage power cable running 128 kilometres through the province of Salzburg.

To lift the pylons, which weigh up to eight tonnes, the LTM 1160- 5.2 has been set up in various configurations depending on the set-up area available and the height of the pylon being erected.

In parts, the set-up area has been very restricted. All three Liebherr cranes, however, have Liebherr’s VarioBase support system – which Liebherr says has helped Prangl overcome the lack of space without compromising safety or lifting capacity.

For the highest pylons, the LTM 1160-5.2 is set up with its maximum configuration. “Three telescopic extension, each measuring seven metres on the 62 metre boom, and the 19 metre double folding jib enable us to reach a maximum hoist height of 99 metres,” said Oliver Thum – technical external services specialist at Prangl. "We have bought a telescopic extension specially for this job. We have obtained two others from one of our other Liebherr cranes from our branch in Vienna.” These telescopic extensions can also be used for all current LTM models with lifting capacities from 100 to 180 tonnes.

Due to the inaccessible nature of some of the sites, however, some of the pylons have had to be erected using a helicopter and even cable cars.

The work started in February 2021 and there was still snow at some of the jobsites in May. As a result, the cranes had to, at times, use snow chains to access the sites. Work is expected to continue until summer 2022, with a few months off for a winter break. 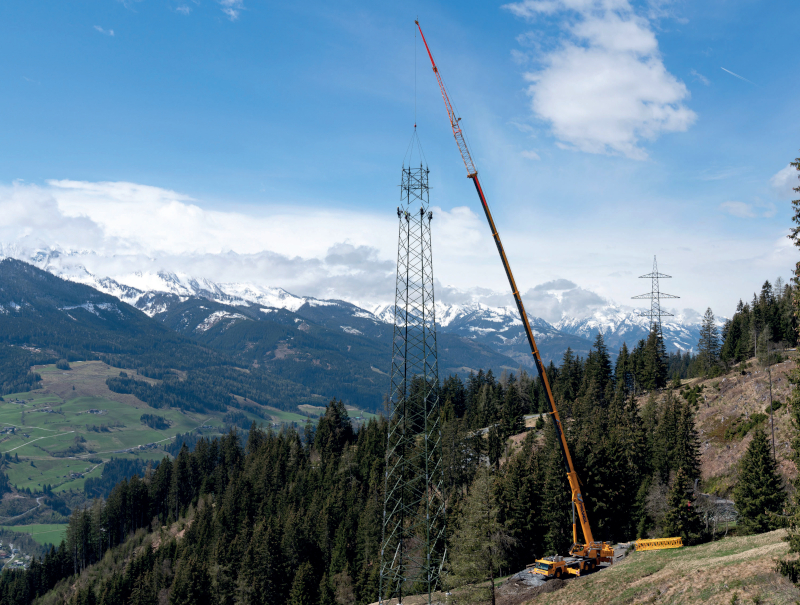 Snow chains were required at times to access erection sites 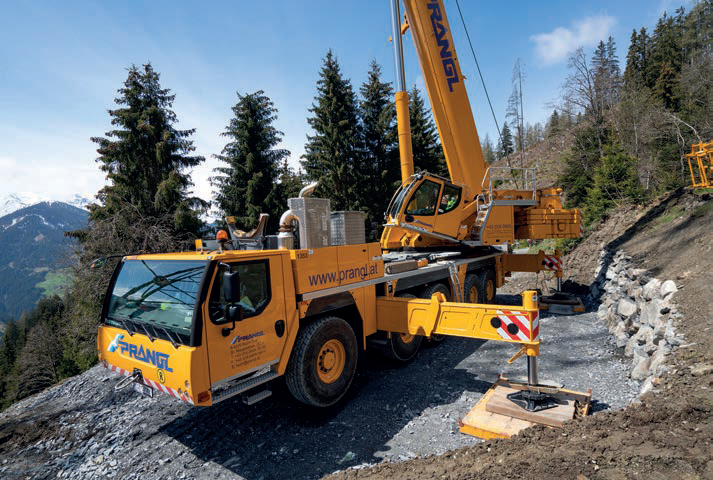