The significant increase in the size of offshore wind turbines is creating demand for ring cranes. Sotiris Kanaris reports.

The global renewable energy sector has been growing fast over the past two decades, and the pandemic has not affected this trend. According to data released by the International Renewable Energy Agency (IRENA) the world added more than 260 GW of renewable energy capacity last year, exceeding expansion in 2019 by nearly 50%.

Offshore wind is a renewable energy source that has been gaining popularity. “The offshore wind industry has nearly tripled in size since 2016, with global installed capacity expected to grow to an estimated 109 GW by 2025 and rise further to 251 GW by 2030,” says Antoine Lefevre, sales manager at Mammoet. “This clearly shows the trends and future prospects in this market, where the average growth per year is reaching 22%.”

The number of countries where projects are taking place has also increased. Lefevre says China, the UK, Germany, the Netherlands and more recently Taiwan are leading in terms of installed capacity. “There is also a clear growth to be expected with strong ambitions announced from respective governments to increase capacities still further. Some new players such as France, USA, Japan and also South Korea, are also committed to become strong players in this market.”

Pieter Augustyns, deputy managing director of European projects at Sarens, also finds that the French and the US markets are showing strong interest in offshore wind. “In the US there is a lot of tendering, and the projects there will be huge. In the near future, I believe there will be a lot of activity in the Baltic region as well.”

The global offshore wind market has matured, Augustyns says, altering the requirements in terms of logistics and the supply chain. Sarens serves this sector by providing solutions for turbine marshalling, foundation marshalling, as well as substation construction and load out.

“15 years ago, every project had a long duration. Today the time frames are short and there is high pressure on pricing. You see the equipment and steel fabrication coming more and more from Asia, where the shipping prices are currently low. Engineering, Procurement and Construction (EPC) contractors and other companies involved in the market have to present cost-efficient solutions in order to succeed in tendering.”

Another major change in the market, has been the growth in the size and capacity of the turbines. Augustyns says in Rotterdam, the Netherlands, a 15MW turbine is currently being tested. “Five years ago, you would see 5 MW turbines everywhere; this turbine has triple that capacity. At the moment, most of the jobs have models of 7 MW.”

Commenting on the trend towards bigger turbines, Lefevre says: “Offshore wind turbines have increased in height and weight drastically in the past decade, with turbines moving slowly towards 15 MW capacity and nacelles getting close to 1,000t. Also, with larger foundations (jackets and monopiles) required to support these machines, onshore logistics is greatly impacted with stronger equipment needed to manage marshalling ports for both foundations and wind turbine generator (WTG) packages.”

“Currently for typical 10MW WTG marshalling hub scopes, where only towers have to be assembled and stacked at the marshaling harbour before installation vessel load out, medium-sized crawler cranes are required (up to 1,350t capacity). With the 12/15MW turbines slowly being implemented, larger crawler cranes will have to be mobilized for tower preassembly (up to 1,600t),” adds Lefevre.

Sarens is currently using a 1600t Demag CC 9800 at a fabrication yard in France, to lift the upper part of jackets and place it on top of the lower parts.

“We have reached a point that even cranes of this capacity are being used well above 75% of their capacity. I believe that currently there is a market for crawler cranes of the highest capacity (3,000t) or ring cranes,” Augustyns comments.

A few years ago, the company performed a tandem lift of a 1,022t jacket in Methil, Scotland, using two Demag crawlers, a CC9800 and a CC8800-1. For jackets of similar size at the Smulders Projects jacket yard in Newcastle, one of the Sarens Giant Cranes (SGCs) was deployed for the load-out and assembly operations. The SGC-120—with a 130m main boom and maximum capacity of 3,200t—was used to handle 28 jackets destined for the Beatrice Offshore Windfarm. Augustyns says this solution offered more flexibility and was less complex compared to tandem lifts.

He clarifies that the use of a ring crane is more suitable for projects with long duration, because of the high mobilisation, assembly and disassembly costs. For example, the SGC-120 remained at the Smulders Projects jacket yard in Newcastle for five years.

“Jackets are typically assembled in two halves: lower and upper. Both sections are upended and then the upper piece is lifted onto the lower piece. The complete jackets are then lifted in one complete piece and loaded onto vessels. Depending on the project, the vessels will deliver to an intermediate marshaling yard or they will go directly to the installation point offshore,” says Lefevre.

“The ring crane is selected for lifting capacity at height and at reach. The heights of offshore wind jackets are reaching 90m plus, and weights are exceeding 2,000t. Upending and assembling activities in this jacket class can be executed with the largest crawler cranes on the market (3,000t), but the pure reach needed to lift out onto vessels is only possible with the load moment capacity offered by our largest ring cranes. Load-in and load-out via this method is faster and more efficient than alternative methods.”

By the third quarter of 2021, three of Mammoet’s largest PTC cranes will be assembled on quaysides serving offshore wind projects. “If someone had said this would be the case ten years ago when these cranes were first commissioned, it would have seemed comical. This is a clear sign of the market changing as part of the energy transition,” he comments.

“To really understand the value proposition, you need to consider the alternative to lifting, which is to load the jackets out using SPMTs. Using a high-capacity ring crane instead you can avoid complex ballasting, and grillage is more simplistic as you don't need to leave free spaces on the deck to accommodate trailers. More critically, the operational flexibility - avoiding tidal restrictions that limit load-out windows - means load-outs can be swift, with a reduction in costly downtime for offshore installation vessels. All equipment in the value chain needs to be productive and our ring cranes enable this.”

“Assembly of offshore wind turbines in ports will also be required during floating wind projects - we currently see some prototype requirements with 10MW turbines,” says Lefevre.

Floating Offshore Wind is a new segment of the wind energy market, which involves wind turbines mounted on floating structures. The unit can be assembled onshore and the entire unit can be towed to the site offshore. The advantage of this technology is that turbines can be positioned in places that were previously not feasible, like water depths where current bottom-fixed technologies cannot be used. In the market there are different types of floating foundation technology: semi-submersible, tension leg platform, single point anchorage and others.

“Floating offshore wind is expected to unlock 80% of global offshore wind resources located in waters deeper than 50m,” says Sarens. “According to industry estimates, the technical potential for floating wind power is around 7,000 GW for Europe, the US, and Japan combined.”

The first operation floating wind farm of scale is the Hywind project in Scotland, developed by Equinor and commissioned in October 2017. Augustyns says there are many projects under development, giving the examples of Kincardine floating offshore wind farm in Scotland, the Hywind Tampen in Norway and the Windfloat Atlantic in Portugal.

With analysts forecasting a 50% annual growth rate for floating offshore wind over the next five years, the heavy lift specialist is targeting this market to provide services, from bare crane rental to turnkey solutions.

Mammoet is also eyeing this market, with its Global Segment Lead for Offshore Wind, Francisco Rodrigues, saying that floating offshore wind is set to be the next big thing in renewable power.

He says that although floating offshore wind has the potential to become a huge global industry, there are still a number of hurdles that the industry must cross in order to become commercially attractive in terms of Levelized Cost of Electricity (LCOE).

“Whereas the price for delivering offshore wind energy in 2019 ranged between $48 and $60 per MWh of electricity, current auctions for floating wind are priced over twice that amount. This means more investment capital is needed to get projects off the ground, and of course higher electricity costs for the end user. One cause of this additional cost is the foundations used for floating offshore wind, which can be truly massive in scale. At their upper end, these giants can weigh tens of thousands of tonnes each; substantial fabrication projects of steel or concrete,” Rodrigues explains.

He adds that the pressure is truly on for supply chains to mature rapidly, with an end goal of meeting the pace at which OEMs can produce turbines. “To achieve the goal of launching one floater per week, every element of the fabrication, logistics and construction chain must be fundamentally re-imagined. A daunting task – but luckily, one that has been tackled successfully before in many industry sectors.”

At the moment the different types and prototypes of floating offshore turbines can be assembled using crawler cranes such as CC8800 and LR 1350, says Augystyns of Sarens. “As these turbines get bigger, the company will constantly assess the different lifting solutions it can offer.”

Lefevre also says that 1,350t and 1,600t crawler cranes are suitable for this markets requirements, even for lifting the 10MW turbines protoypes, as only a small number of turbines will have to be entirely assembled, including nacelles and towers.

“We see that large ring cranes are suitable for WTG integrations around 12 MW and above. Instead of our PTC 200 like in Taiwan we can use our PTC 140. This is effectively the same crane but on a smaller base, which takes up a smaller footprint on the quayside.”

“The larger PTC or the SK machines come into play as the power output of turbines increases further, but the assembly strategy also comes into play. For example, if you want to build the complete tower on land and then lift it as one piece onto the floater, you need the bigger machines for this.”

If offshore wind turbines reach 20 MW in the near future, as Mammoet anticipates, then ring cranes may become an even more popular solution. With only a small number of them in the market, we might see more units being built. 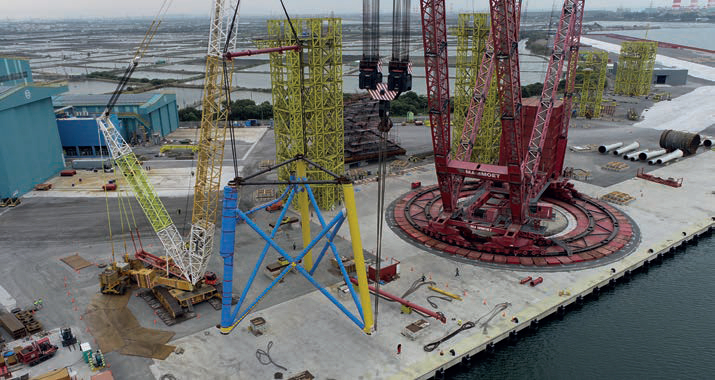 Mammoet-Giant, a joint venture between Mammoet and Giant Heavy Machinery Services, has upended the upper block of the first locally fabricated jacket of a wind turbine in Taiwan. The PTC 200-DS ring crane and a Liebherr LR 1750 crawler crane were used to lift the 257t upper block. After the upending operation, the upper block was placed on custom designed supports and the 25m height structure was then transported by 24 axle-lines of SPMT to the next location for further assembly process. 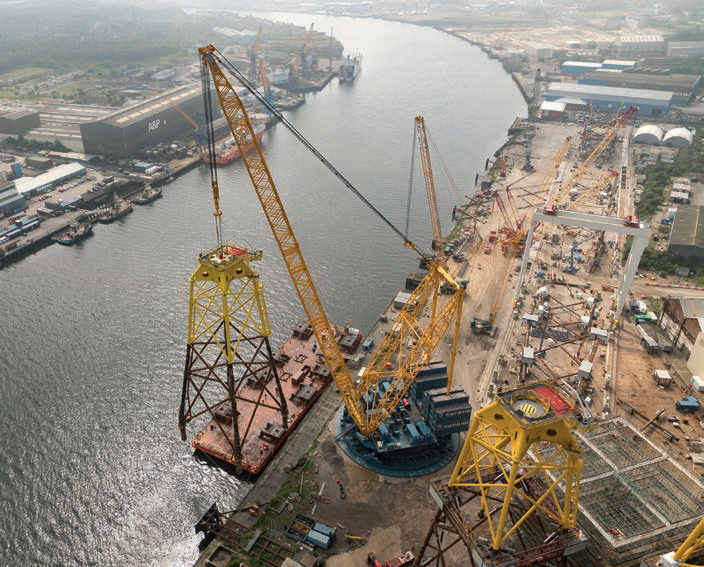 Sarens deployed its SGC-120 ring crane for a loadout and assembly operation at the Smulders Projects jacket yard in Newcastle, UK. Smudlers was responsible for the construction and installation of 28 wind farm jackets for the Beatrice Offshore Wind Farm. The SGC-120 lifted the 397t wind farm modules off the barge and set them 120m away from the load-out site. It also placed the upper jacket on top of the lower jacket, achieving a final height of about 70m.