The Italian manufacturer’s newest tower is the MRT144 flat top. It will be displayed at Bauma on a 4.5m cross base with a 65m jib.

The company says, "The MRT144 is a very special crane which has technology that is so far unmatched by most of our competitors.

This technology is called the "AS40-08t-s" which allows for 8t maximum lifting capacity with a gearless hoist motor in single reeving/two fall mode. 1.4t is possible at maximum radius. The motor is a 40hp inverter with possibility of 200m or 450m of rope with a Lebus drum. What this basically means is: less horsepower lifts the same load but at faster speed. Less really is more."

The new flat top may be equipped with other hoist motor configurations allowing up to a 60hp inverter with 10t maximum capacity and up to 780m of hoist rope on the drum.

The company will also display its MRT111 counter jib, which it says is currently its best selling model, at ground level along with its deluxe cabin. The MRT111 is a flattop crane and has a maximum jib of 60m and can lift up to 8t and almost 1.4t at radius with a 60hp inverter.

The exclusive deluxe cabin provides approximately 180º vision for the crane operator and is a double reflective chamber, keeping temperatures stable and providing much needed protection from the suns glare. It also features as an ergonomic seat, easily accessible controls and a multilingual touchscreen display. 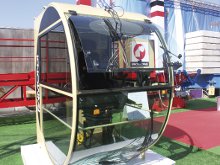