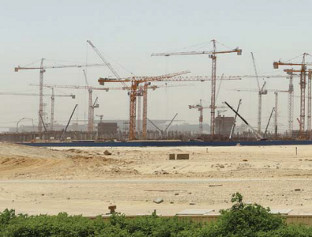 NFT - Specialised in tower cranes 14 December, 2018 Award winning and resilient to economic changes, NFT has come a long way since its establishment in the 1980s. Starting out as the first supplier of tower cranes in the GCC region, it has now become Potain’s number one dealer in the world and the world’s number one tower crane supplier in terms of lifting capacity. > read more

Integrated Logistics - Leading across the Middle East 14 December, 2018 Integrated Logistics, established in Kuwait in the year 2005, offers a total logistic solution for lifting and haulage for heavy or oversized cargoes, and rental and leasing of cranes. The company summarises its offering.

GTKs flock to China 21 March, 2017 Chinese energy specialist CPIE is putting a fl eet of six of Grove’s unique GTK telescopic tower all terrains to work on wind-turbine jobs. China Power Equipment Installation Engineering (CPIE) has been using its Grove GTK1100 cranes to install wind turbines of up to 3MW in China.

The land of opportunity 16 November, 2015 It’s all change in China, with technology evolving, economic growth slowing, and opportunities for domestic and international crane manufacturers alike. Daniel Searle reports from Beijing.

China projects round up 16 November, 2015 This month we review projects from Shandong, Macau, Jiangsu, Hong Kong.

A bright day dawns in the east 18 September, 2014 It’s been at least ten years since Cranes Today last visited Japan. This summer, Will North made up for that with visits to four of the country’s leading international crane builders, Tadano, Kobelco, Hitachi-Sumitomo (HSC) and Maeda. The four companies discuss the state of the market, at home and abroad. We visit each of them in turn, starting with Maeda in Nagano, then heading south to HSC in Nagoya, Kobelco in Akashi, and ending up with Tadano in Takamatsu.

Asia Project round up 16 January, 2014 This month we review projects from India,Singapore and China.

The warring cranes period 16 January, 2014 For a long time the Chinese lifting industry appeared to be an unstoppable force, and even a global financial crisis couldn’t halt its progress. However, in the last two years the market has begun to contract forcing many in the crane business to change their approach. The decline of the construction sector has caused problems for crane firms, whilst collapsed JVs, legal disputes and allegations of corruption involving some of China’s major manufacturers have reinforced previous criticisms of the economic environment. Zak Garner-Purkis went to this years BICES in Beijing to discover what’s really happening in the Chinese crane business.

Lifting in the land of fire 11 October, 2013 In the first of a two part in-depth region report, Stuart Anderson examines the broad economy of Central Asia, and looks in detail at Azerbaijan. Next month’s article will look at the countries to the east of the Caspian.

A colossal column 12 June, 2013 Tiong Woon completed one of the largest heavy lift and haulage projects for a single column in Singapore. The Xylene splitter column, which was 108m tall, with a weight of 1,147t, was installed at Jurong Aromatics Corporation’s complex in Jurong Island, Singapore, using a 1,600t Terex CC 8800-1.

Chinese cranes get technology focus 14 February, 2013 China’s economic rise has given a boost to regional crane manufacturers. In Shanghai, the location famous for skyscrapers and Bauma China expo, they are focused on product development. Cristina Brooks reports

India on the verge 31 January, 2013 This year's show calendar kicks off in one of the world's fastest growing crane markets, India.
Mumbai's bC India, from the producers of Bauma and ConExpo, promises to be one of the biggest global class construction equipment shows the country has seen.

A truckload of change 02 August, 2012 For fifty years or more, Europe’s truck-loader manufacturers have dominated world markets with their broad ranges of articulated boom loaders. Now given the serious debt issues facing many of Europe’s largest knuckleboom markets, Stuart Anderson asks, what will be the manufacturers’ survival and growth strategies?

Job map 01 August, 2012 Major jobs around Russia, including for the Sochi Olympics