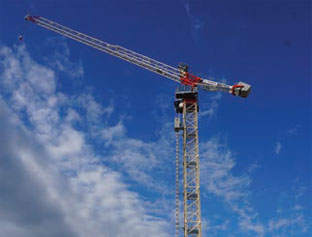 Welex - On firm ground 14 December, 2018 Welex, established in the 1920s, takes its name from the name of the owner at the time, Westerhout, and the place where the company is situated, Lexmond. It started selling railway sleepers and dragline mats, and now trades crane mats internationally.

Sarilar - Beyond transport 14 December, 2018 Turkish company Sarilar has its roots in transporting heavy loads but now it is a leader not only in transport, but in heavy lifting and assembling too.

Mammoet - Time is money 14 December, 2018 Mammoet is a global market leader in engineered heavy lifting and transport. However, it says the biggest thing it moves is time because their services help improve efficiency of construction and maintenance projects.

Sponsored: Beyond transport 21 December, 2016 Turkish company Sarilar has its roots in transporting heavy loads but now it is a leader not only in transport, but in heavy lifting and assembling too. “We started with offering transportation services and then purchased our first crane on credit. Other cranes followed that one because the market needed cranes. Initially we rented our cranes on a daily basis but for many years now we’ve rented our cranes for periods of months,” the company says.

Sponsored: German (re-)engineering - Quality to rely on 21 December, 2016 Liebherr has sold used cranes since 1974, with the business established as its own department in 1980. It has sold almost 10,000 cranes in 42 years, and offers customers around the world a way to find the used crane they want, backed up by the support of one of the world’s most respected manufacturers. Used cranes have a long history within the mobile crane business of Liebherr.

Sponsored: Integrated service 21 December, 2016 Fagioli Group’s wide range of activities can be summarised by its acronym, FIS – Fagioli Integrated Service. The company says that applying this total supply chain concept is unique in the transport, lifting and project forwarding market.

Raising the mast 22 August, 2016 Over the past year, Rapid Response Solutions (RRS) oversaw the lifting and rigging of Magma Structures composite masts for a yacht in Portsmouth, UK.

Spain projects round up 08 September, 2015 This month we review projects from Marín, Cádiz, Cabo de Peñas and Bilbao.

Brighter shores 07 September, 2015 After the Spanish housing construction market was severely damaged during the recession, the country’s crane manufacturers had to look abroad and expand their portfolios. Daniel Searle reports from Zaragoza.

Western Europe Project round up 24 December, 2014 This month we review projects from France, Germany.

South Europe Project round up 31 July, 2014 This month we review projects from France, Spain, Italy and Turkey.

Rising above the ruins 31 July, 2014 Italy has a long and proud history of crane-building and was for many years one of the world’s leading markets for both rough terrains and tower cranes. Today though, it’s domestic market is decimated and crane builders are having to look for new opportunities. Will North visited some of these and Samoter in Verona.

Spain explores the world 30 July, 2014 With domestic demand in Spain as low as it has ever been, crane manufacturers and rental companies are focusing on opportunities overseas. Liliam Molina reports.

Europe Project round up 18 March, 2014 This month we review projects from Guernsey, France, Sweden and Germany.

In our fleet: BKV 11 February, 2014 In 1979 Chris Deij formed Barneveldse Kraanverhuur B.V. (BKV). In 1998 the ownership was passed on to the four sons of Chris Deij: Daan, Dick, Henry and Albert. BKV B.V. currently has 23 cranes with a lifting capacity of between 40t and 750t. Daan Deij, the current MD, talks about the range of the company’s activities.

Emergency recovery 14 February, 2013 When a helicopter crashed into a tower crane in Central London, crane owners Brookfield Multiplex confounded pessimists by arranging the supply of one of the country's biggest mobile cranes from hirers Ainscough. Will North reports

In our fleet 31 January, 2013 Turkish tower crane firm Tekno Group has had a role in developing the market in Turkey, says its vice president, Sinan Tureyen.