Ludo Mous, director of operations at Mammoet Europe is based at Mammoet’s Schiedam location in The Netherlands. He has worked for the company for the last 30 years, all around the world, in all areas of specialised transport. “I started at a construction yard where I was introduced to load-outs, trailers and, in 1992, to Mammoet,” Mous explains. “Mammoet was actually my subcontractor and I was their client. I made the switch from the construction yard to Mammoet and started as a project engineer travelling with a crew. Then I became a project manager, working through bigger projects, until I became a senior project manager.

“After Mammoet’s takeover by Van Seumeren Kraanbedrijf in 2000 I became an operations manager and my present position is director of operations for SPMT worldwide.”

Mammoet has between four-and- a half-thousand to 5,000 owned SPMT lines around the world. On top of that it is using close to a 1000 lines that on rent from other companies.

“The fleet is spread all over the globe, including Australia and the Asia Pacific region,” says Mous. “At the moment we have a big fleet in China, and in Russia we currently have 1600 lines. We also have many SPMT in Europe, Canada, north America, the Middle East, and a small number in Africa.”

Over the last five years Mous says the SPMT market has been fairly stable with his primary SPMT purchases being primarily to renew the fleet. Mous has, however, seen a change in the SPMT market in that fabricators are increasingly buying their own SPMT. “We have seen a change with fabricators buying SPMT but we also see the opposite, where companies that bought SPMT five or six years ago are now putting them up for sale again. So apparently it is not as profitable as they thought it would be. But, yes, we do see a change in the market where 10 to 15 years ago buying an SPMT was a one-off whereas now it has become more of a commodity.”

The majority of SPMT in Mammoet’s fleet are made by Scheuerle. “We recently sold our last Kamag,” Mous qualifies. “At the moment we have about 80 to 90 lines of Comettos in use, too. We do look at products from Scheuerle's competitors although once you have a fleet this size it's hard to mix other manufacturers’ SPMT in with it.”

According to Mous the industries providing the most work for Mammoet’s SPMT fleet include wind, civil works and energy. “There is a lot going on for projects like Arctic LNG but, in general, we are seeing demand for our SPMT from the wind industry, in the civil industry, and the energy renewal industry. We are also expecting a lot of civil work in the USA coming up as there is a campaign there for the renewal of bridges. Essentially, we follow the market with as wide an offering as possible.”

‘Following the market’ involves actively moving Mammoet’s SPMT fleet around the world to where needed. “We go where the projects are,” Mous emphasises. “That was one of the basic design requirements of the SPMT – that it could be containerised. And that has never changed, despite some companies still calling larger trailers that can’t easily be transported SPMT.”

Returning to the issue of end users buying their own SPMT rather than renting them from a specialist such as Mammoet, Mous is clear: “Don't buy! I would say that… but there is a good reason: because it looks so easy to operate an SPMT fabricators decide it’s a good idea to buy their own but I always try and warm them that an SPMT is not simply like operating a big forklift.”

At present, anyone can operate an SPMT as no license is required. “This is a bad thing that the industry is still facing,” says Mous. “Basic instruction in operating an SPMT is different to having a licence to correctly operate it. I look at it in the same way that, if I collect a new car from a showroom, the salesman's instructions in how to work it do not equate to having a driver's licence.”

“This is something that we have addressing with our training scheme for the last 10 to 15 years,” Mous continues. “We insist that an SPMT operator has to have a certificate but, legally, there's nothing in place. Currently we have between 350 to 400 trained operators around the world. We have senior supervisors that travel around the world and local trainers who teach the basic levels. Our training puts operators in a classroom where they have three days of theory followed by both theory and practical exams.

“The training is quite tough and some potential operators do not make it; they are assessed and found not suitable to become an SPMT operator.”

Mammoet believes such thorough training is important for a number of reasons. “It all starts with safety, and also to give the guys the basic training needed to operate an SPMT because it is a complicated piece of equipment and you have to know what you're doing. This is why we set up our global, standardised training system.”

In order to help further develop a safer SPMT working environment Mammoet has also approached ESTA (which has published a best practice guide for SPMT). “We'd like to work with ESTA to further SPMT training and operating guidelines to help create a safer environment,” says Mous.

Another benefit of Mammoet’s extensive training extends to the setting up of SPMT, which is a manual process requiring great care and attention. “An SPMT is a great piece of equipment but it is not a simple one; every configuration needs to be carefully set up.

“The way combinations are planned is first defined by the laws of engineering – i.e how and in what configurations is the set up possible. But beyond that it is the operators themselves, together with their supervisor, who physically sets the trailers up.

“Within Mammoet we have a double-check system where two people set up the trailer together. One starts at one end, the other person at the opposite end; they meet in the middle and continue by checking the other person's work.”

A trained operator can also monitor load weights via the control box or gauges on the side of the SPMT to see how heavily they are loaded, which can be useful with the increasing loads being transported via SPMT.

“The increasing weight of loads being moved is also one reason why we developed our 'Easy Trailer' system to calculate dynamic loads and also why we approached ESTA to address safety in the market,” says Mous. “The lifetime of a trailer is another area of safety we are looking at, as there are no guidelines regarding the age of an SPMT and how this could affect things. It's hard to convince the market that things like maintenance are necessary and because they cost money it's too easy not to do it.”

Apart from looking to enhance safety across the SPMT sector, Mammoet is also exploring some exciting areas of SPMT innovation. “The ePPU is coming to Schiedam soon,” Mous reveals. “When it arrives we will start testing and using it to see how it performs in practice. I've seen it working and it is a joy if you walk beside it; you can have a conversation beside it and, of course, it's good for the environment.”

After such a long time working with special transport Mous is well-positioned to speculate of the future of the SPMT sector: “It's a stable sector at the moment but I've been in this business for 30 years and seen many, many changes. When I started we had around 200 SPMT lines whereas we now work with four-and-a-half to 5,000 lines. During my career, I've already said multiple times, that we've reached the limit of what we can move... And yet every time we do more. For example, next year we have a planned transport involving 730 lines. Will this be the limit? I just don't know any more...!

The full video version of this interview can be viewed via the new ‘CTTV’ video tab of the Cranes Today website: www.cranestodaymagazine.com/videos 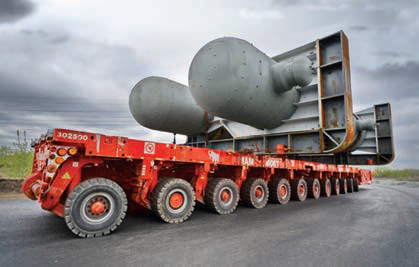 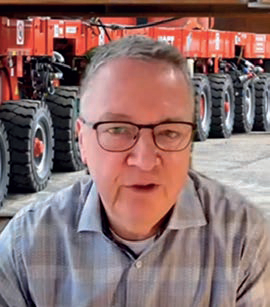